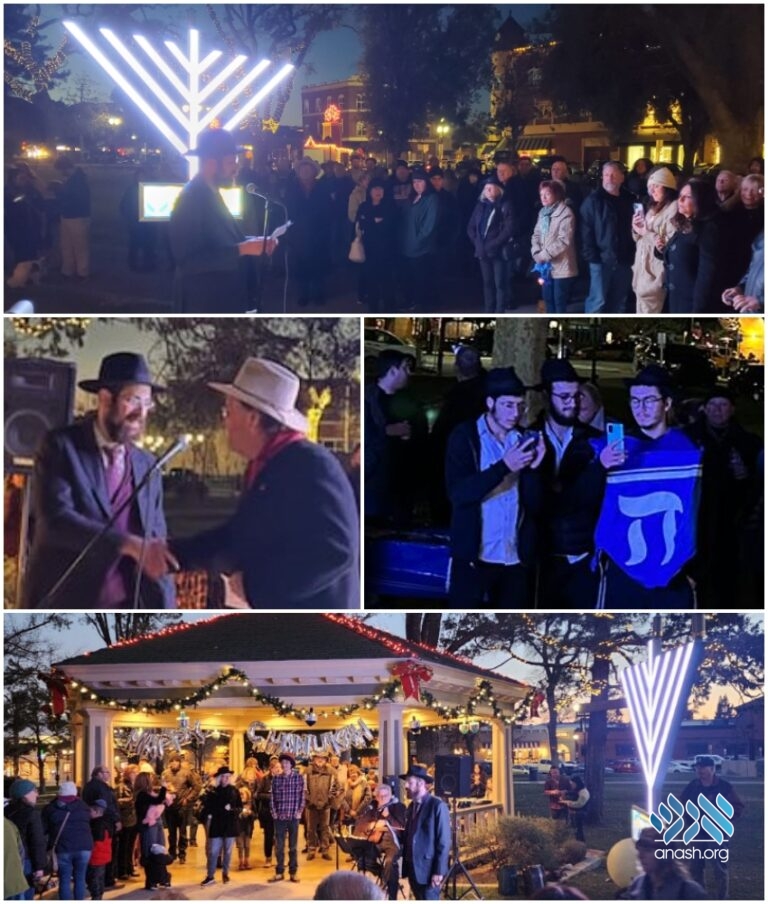 The Jewish community of Paso Robles, CA celebrated the city’s first-ever public menorah lighting with more than 200 people in attendance and graced by the mayor and local dignitaries.

Last week on the first night of Chanukah, the Jewish community of Paso Robles and the surrounding areas gathered at the Downtown City Park. The park was graced with a 9-foot Menorah that was set up near the park’s gazebo and was lit at sundown.

The evening started with hot soup, latkes, and donuts. And there were fun stations for the kids, like cookie decorating under the gazebo. And Jay the Juggler made an appearance as the evening got closer to sundown. There were also tables with complimentary Chanukah menorahs and candles for people to take home and light for the rest of the eight nights of Chanukah.

“As Shabbos ended, we looked at our lists and realized we had 50 people who said they would be coming,” Rabbi Meir Gordon told Anash.org. “By Sunday morning we realized we would need to prepare for 75 to be safe. At about 4:45 people started gathering around the Menorah, we thought they were passing by. More and more people were coming and staying to participate in the celebrations. There must have been more than 200 people there,” Rabbi Gordon exclaimed. “We looked back at our permit application with the city and we saw that we wrote that we were expecting 20-35 people. The turnout was an incredible show of support and Jewish pride”

As the sun set, the Shamash and the 1st candle commemorating the first night of Chanukah were lit, along with the three Berochos that are recited on the first night of the Chanukah. The crowd then broke out in dancing led by the “Dancing Dreidels” the Bochurim from Yeshivas Ohr Elchonon – Chabad.

“By gathering here this evening in unity, we show our belief that light will triumph over darkness and pray that good will defeat evil,” Gordon stated at the menorah lighting. “This same message can be found today when the world’s in such a state of chaos. In these dark days, it’s good to join together to celebrate the victory of light over darkness. The few over the many. May all of us go from here rededicating our efforts to spread light in the world with deeds of goodness and kindness.

“This year is a special year, a Hakhel year; every seven years, men, women, and children would gather together in temple times and hear words of Torah and words of inspiration from the Jewish king of Israel to be inspired to increase in acts of Torah and mitzvah and acts of goodness and kindness. Today, we too are gathering here, as a Hakhel gathering, to unite and to be inspired, as the message of Chanukah is that wherever you stand today, tomorrow you must do more.”

“Happy Hanukkah. This is something special for Paso Robles,” Hamon said. “Thank you for coming. We’ve got a great crowd.”

The Paso Robles Fire Department also teamed up with Chabad of Paso Robles by dropping chocolate gelt in little parachutes from the top of one of their ladder trucks. The chocolate rained down on the children in the crowd, adding to the Chanukah fun.

“A special thank you to Yaakov Moshe Friedman, Yisrael Zecharia, Yaakov Marcus and Eli Chaim Berkowitz for their help with this event,” Rabbi Gordon said.

The Gordons moved to Paso Robles to establish Chabad in the area less than a year ago. Rabbi Meir together with his wife Etty and their 3 children are shining the light of Torah true Yiddishkeit in an area that has been dark for too long.

This week they are in middle of a campaign to raise funds to continue their work. Partner with them by visiting chabadpaso.com/yearend to have a part in the work that they do.