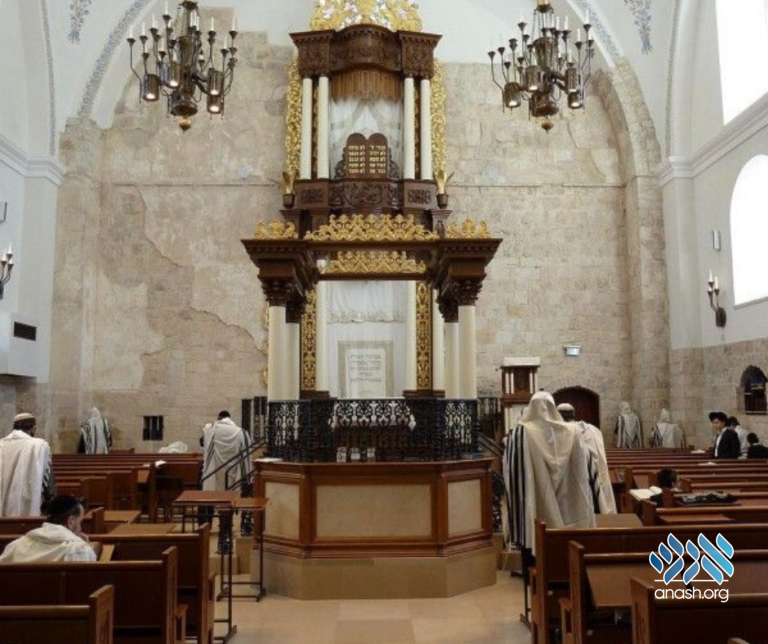 Coming from the first successful month of the “Shluchim Sermon,” we are pleased to present a free sermon for this week — Parshas Vayigash, about the power to be proud and observant Jews in exile, even while facing adversity.

A joke to begin with:

My wife is threatening to kick me out of the house because of my obsession with acting like a news anchor.

More on this after the break.

Yosef’s act was nearing its conclusion. He was acting like a stranger to his brothers; they did not recognize him. He had told them that he would hold on to the youngest brother — Binyomin, and they finally had enough.

Yehuda, the one who had guaranteed Binyomin’s return to their father, Yaakov, approached Yosef. and told him that he thought him as “powerless” as Pharaoh; threatening to take matters into his own hands.

At that point, Yosef could no longer keep up his act, and asked all officials in attendance to exit, and divulged his identity to his brothers. He told them to quickly go home, and return to Egypt with their father Yaakov, so that he could finally see him after all these years.

Before Yaakov went down to Egypt with his whole family, he sent Yehuda ahead of them, to establish a study hall, where the Torah would be studied.

Now, this raises the obvious question: Why did Yaakov need to send Yehuda down to Egypt to set up a Yeshiva? Why couldn’t he rely on Yosef, who was already there?

Yosef had stayed completely true to the Torah, even while in Egypt, and becoming its ruler. This is why he is called Yosef Hatzadik — Yosef the Tzaddik; not all of his brothers got that title.

Not only that, Yosef’s behavior in Egypt — keeping to the Torah even while enmeshed in the world around him — teaches us that we can thrive as Jews in exile, even while we’re in it and dealing with it, by always keeping sight of what our true goal is.

A story which illustrates this point:

Rabbi Mendel Futerfas spent several years of his life in a Soviet labor camp. One of the prisoners with whom he served, said that he had been a tightrope walker in his life on the outside of the prison’s confines.

When Stalin died and the government eased the pressure on the camps, some of the inmates decided to make a celebration and the tightrope walker saw his chance to show his talent.

He found a long thick rope somewhere in the camp, attached it to the side of a building about ten feet above the ground, stretched it to another building about fifteen yards away and attached it there at the same height. For a long time he was up on a ladder pulling, testing and fastening until everything was finally ready.

A crowd gathered around. The man removed his shoes and gingerly but unceremoniously climbed up the ladder onto the rope.

Reb Mendel was one of the first to get interested, and he later explained to fellow Chassidim what he had witnessed:

“First he climbed up onto the rope, took a few steps, lost his balance and fell. But he knew how to fall, like a cat. He waited a few seconds and climbed up again and fell again the same way. But eventually he started walking, and then dancing from one foot to the other to the rhythm of the clapping onlookers.

“Then he got to the end, turned around, danced back to where he started, and climbed down amidst the applause and cheering of the crowd.

“After shaking everyone’s hand he walked over to me and said with a satisfied smile on his face. ‘Well Rabbi, what do you think now?’

“I told him I was impressed, but I couldn’t help wondering how he did it. How could he walk on such a thin rope without falling off? After much prompting he finally revealed his secret. ‘I fix my eye on where I’m going,’ he said, ‘and never even think about falling’.

“He waited a few seconds for me to digest the answer, and then said: ‘Do you know what the hardest part was? Turning around! When you turn around you lose sight of the goal for a second. It takes a long time to learn to turn around!'”

Reb Mendel learned a lesson from this tightrope walker, that when he have our goal in mind, we do not fall, even when surrounded by perilous circumstances.

Yosef always had his goal in mind. He was always focused on his true mission in life.

Now, back to our question: Why couldn’t Yosef be the one to set up the yeshivah, to perpetuate the study of Torah in Egypt? It would seem that he would be the most suited for this job!

Yosef was certainly righteous; but practically, he did not have much time to study Torah, as he was consumed with dealing with Egypt’s governance.

The mission of transplanting Judaism in its fullest could only be symbolized and fulfilled through someone untouched by the exile.

Yehuda, who had been grazing his sheep until now, while singing G-d’s praises, could be the one to establish a yeshivah which would ensure that the mccoy spirit of Judaism would flourish.

Now, as I mentioned, Yosef is a model for us Jews in the current exile. Let’s talk about that some more.

There are two ways we can approach exile. One is a spirit of needing to conform, and not stand out too much; another is freedom of spirit to fully engage in our Judaism, and not be self-conscious about the fact that we are different.

One day Stalin decides to go to the cinema in disguise and hear what people are really saying about him.

When the newsreel comes on the audience stands up and applauds each time he appears on the screen. Stalin is pleased. Modestly, he himself remains seated. After a few moments the man next to him leans over and whispers:

“Most people feel the same way you do, Comrade, but you’ll be safer if you stand up.”

Even the part of us which is engaging with the world — by G-d’s mandate — shouldn’t be who we truly are.

One Chassid of the Rebbe Maharash was a businessman who would travel from Lubavitch to Petersburg on business trips. In Petersburg, he would dress in modern fashion, and when he would return to Lubavitch, he would put his long chassidic garb back on.

One day, it dawned on him that he was living a lie; he decided that he could no longer lie to the Rebbe, and live a double life. So, this time, when he came back to Lubavitch, he kept his modern clothing on, and entered the Rebbe’s room for yechidus — a private audience. When the Rebbe asked him why he was wearing these clothes, he replied that he had decided not to live a lie anymore.

The Rebbe told him, “I already knew that you dressed this way when you’re on business, but I thought that it was there that you were lying…”

G-d wants us to be in the world, and above its limitations at the same time. How can we do that!? Through connecting to G-d. G-d is infinite, and above all limitation, and when we connect to this spirit, nothing can stand in our way.

Yehuda’s attitude came to the fore when he approached Yosef in the beginning of this parsha’s story— not yet knowing that he stood before his own brother. In his mind, he was standing in front of the acting ruler of Egypt, the superpower of the world in that time; and yet, he was very clear about his intentions.

Interviewer: What is your greatest strength?

Me: I am very determined.

Interviewer: That is the number one strength to have in our company. We’ll get in touch with you when we make our decision.

Even though Jews acted with strength throughout all generations, there were practical impediments to acting as a Jew should. These days, with the help of G-d, we live in countries that not only do not impede religious observance, but they actually encourage it.  So we need to use the opportunity we have.

We’ve recently heard of an upsurge in violence against Jews. Let us not cower. Let us stand proud as Jews and thus earn the respect of all decent people in the world. Let’s be the Yehudas and Yosefs, and strengthen our spirit and observance of Judaism!

To view the sermons from the past month, please visit freeposts.shluchimsermons.com.

Sermons are ready by Tuesday morning.