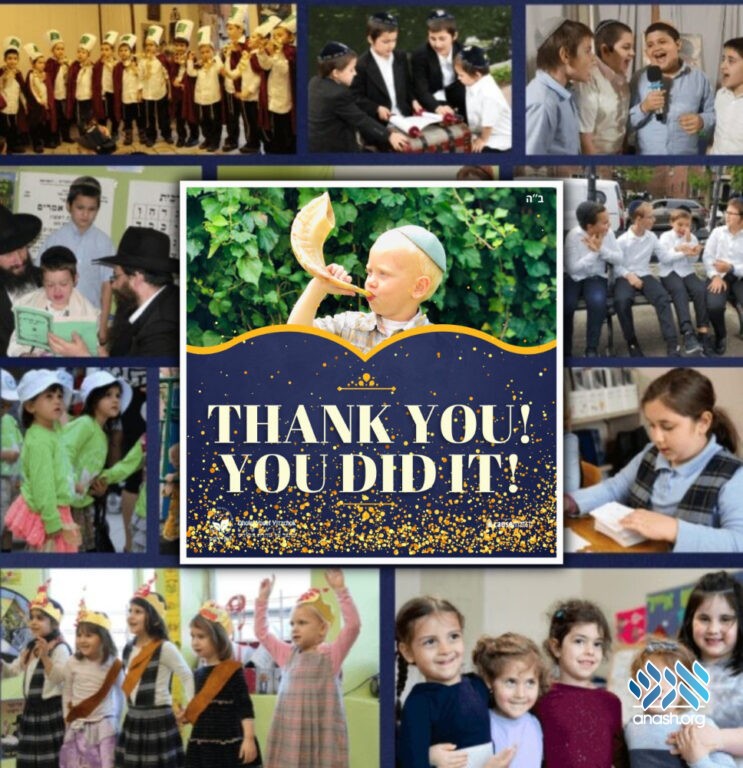 Oholei Yosef Yitzchok Lubavitch thanked their supporters after successfully concluding their first-ever crowd fundraising campaign, an exhilarating two days where they witnessed the impact of their vision on so many.

On behalf of the Oholei Yosef Yitzchok Lubavitch community, we would like to thank our supporters for giving us the resources to continue providing exceptional chinuch al taharas hakodesh in Crown Heights.

As 48 hours came to an end and we successfully finished our first-ever crowd fundraising campaign, people of all ages were celebrating! It was a momentous climax to an exhilarating two days where we witnessed the impact our vision has on so many.

The majority of money fundraised comprised small donations from people spanning various demographics and communities; it was an expression of true unity. Even parents who often only play a quiet role in the running of our school created teams where they raised large sums of money. Students who usually go about their day attending classes and finishing assignments were ecstatic about the fundraiser and came together to do their part.

Boruch Hashem, we had 31 teams committed to specific goals and managed to network a vast array of people, thanks to our diverse parent-body and supporters. Even our janitor and UPS delivery man donated, encouraging their non-Jewish friends to do the same. There were 48-hours of unifying electric energy!

This is not only a significant achievement for OYYL. It is a victory for our 650 donors and many ambassadors who believe in providing a forward-thinking pedagogical approach with an absolute dedication to the Rebbe’s vision and Chassidic values.

As one parent commented post-campaign, “Don’t underestimate the power and passion of OYYL. To the staff, parents, and anyone else who took the time and effort to raise money for our school, thank you with all my heart.”

Additionally, we would like to voice our immense gratitude to the team at Cause Match, without whom we would not have had the courage, resources, or support to pull this off. Your guidance, coaching, and internal and technical support, really made this dream a reality.

Our Cause Match Coach, Mordechai Katzenstein,⁩ noted after the campaign, “A fundraising campaign acts as a mirror for the running of an organization; is it organized, is there a healthy working environment, do the staff employees believe in the organization, and do co-workers support each other? As I assisted OYYL in their campaign I saw an organization that consists of incredible staff who believe in each other and have a very healthy and strong internal relationship. Your students are in very good hands.”

A special thank you to our major campaign donors who gave us the confidence and support to fulfill our dream. Thank you, Keren Yisroel Sabba Foundation, Sara and Dovid Leib Halon from Learning Learners, Meir Kabakow, Ofer and Dafna Shaked, Ido Dagan, Lev and Olga Levayev, Shmuel Kaplan, and Meir Shmukler.

The money we raised is the start of a new beginning. B’ezras Hashem, we are soon launching a building project to create a secure home for OYYL’s future. The money raised in this campaign will go towards those costs.

The OYYL Administrative and Educational Team