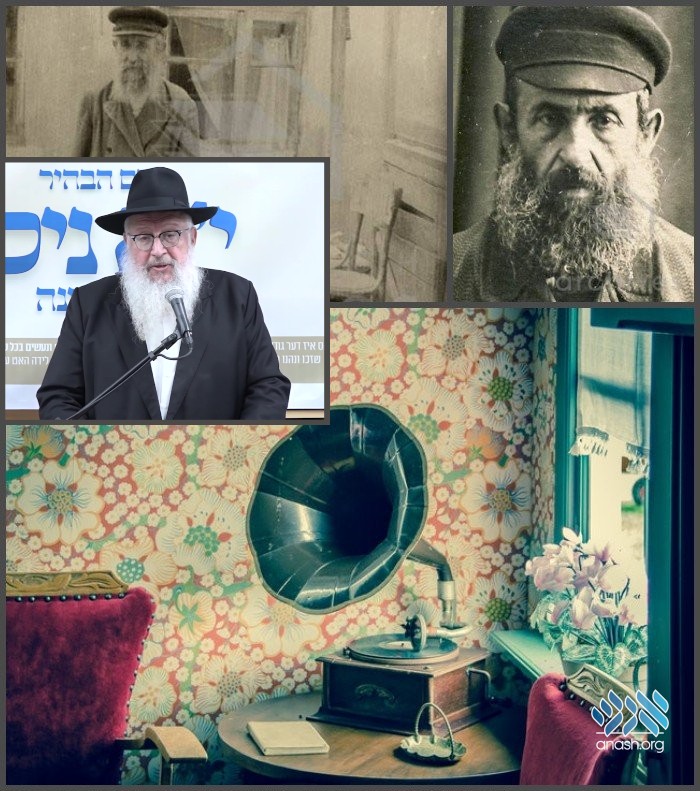 Anash.org exclusive: Rabbi Shlomo Galperin of Crown Heights shares childhood memories of his grandfather, R’ Shmuel Galperin, who was a tomim in the original Tomchei Temimim in Lubavitch and later a shoichet in Babynovich, and his wife, Bubbe Reiza.

Recently, an article was published on Anash.org about recordings of nigunim discovered in Russian archives sung by several chassidim 100 years ago. Among them was Reb Shmuel Galperin, a tomim in the original Tomchei Temimim in Lubavitch and later a shoichet in Babynovich.

R’ Shlomo learned in the underground yeshiva in Tashkent and came to the Rebbe via Israel in 1972.  He married Shifra (née Fox) and resides in Crown Heights. He has devotedly been working with Russian Jewry for almost a half a century at the direction of the Lubavitcher Rebbe. During a yechidus, the Rebbe imparted to him, “There is no greater shlichus than to be mekarev Yidden who are tinokos shel beis rabon (schoolchildren), who were separated from Yiddishkeit for so many years, to our Father in heaven.”

Their children and grandchildren proudly continue to live by this sentiment, involved in shlichus and spreading the Rebbe’s teachings in many cities across North America.

Shabbos day – short in the winter or long in the summer – I would sit next to or on the lap of my zeide, Shmuel Galperin, during shalash seudes. He loved me as all his einiklach. Bubbe Reiza would ask him, “Shmuel, vilst epes essun for shalash seudes? Would you like to eat something?” Zeide would always reply, “Eib es is faran epes, farvos nisht? If there is something, why not?” Usually, Bubbe served a china cup filled with compote, or an apple with a small knife and a piece of cake – lekach (honey cake), or a torte (sponge cake). Zeide Shmuel would make motions as if he was ready to make a bracha and start eating – like swirling and mixing the fruit soup – but instead he would suddenly start singing a dveikus’diken nigun, a freilichen tune, a volochel, or a “nigun mit verter” (with words).

For some reason, in my memory the room was very dark. I don’t think we left the light on for 24 hours every Shabbos, or perhaps the source of electricity was from another room. I remember on erev Shabbos before sunset, my Bubbe lighting candles in small, very elegant, old-fashioned copper leichter, and my mother crying while saying the brachos. My sister and I would stand by the burning licht, while my Bubbe would read “techines,” Yiddish prayers reserved for auspicious times.

The singing would last until maariv and havdalah. I was mesmerized with the nigunim and loved this time of twilight on Shabbos. There was not much else to do for a child of 5 or 6 years old. Zeide Shmuel would sing his heart out. Sometimes he was very fardveiket. Now, I understand that he and his mind and soul were someplace else, like in Lubavitch, Pleshinitz, or Babynovich…

My father Reb Shimon, the son of Zeide Shmuel, miraculously survived in the Red Army fighting the Nazis from the beginning until the end in WWII, first as a soldier, and then as an sergeant decorated with many medals and citations for bravery. My mother Bluma Galperin (née Moskalik/Zuraavitzer) and the rest of the family living in Leningrad fled the Nazi onslaught, first to Bashkiria – a wilderness in those days between the river Volga and the Ural Mountains – and later to Tashkent in Uzbekistan, where many fellow Jews sought refuge.

After the war, my father was reunited with my mother, my older brother, and his parents, and began to rebuild their life in Tashkent. All of their previous homes in Moscow, Leningrad, and Babynovich in White Russia were totally destroyed, bombed or burned to the ground.

After first living in temporary accommodations and rented apartments, there came a time when my family began to look for a more permanent dwelling. My father took charge of the house search, but my grandfather had to agree and approve. My grandfather for some reason or another passed up many more beautiful dwellings for one that had two private courtyards, in the front and in the back. This single-family home on Dzhar Kucha Street in Tashkent is the home of my earliest childhood memories. This home also had a separate room where my grandparents lived. As far as I can remember, usually suppers, Shabbos and Yom Tov my grandparents ate by us together with the guests. This is where we lived until the major earthquake of 1966 forced us to move once again to a newer apartment in a different part of the city.

Soon after we moved into the house on Dzhar Kucha Street, my father and grandfather, who were both quite handy, built a sturdy frame from 2×4 beams that stood year-round in the front courtyard as a part of the landscape. My grandfather immediately cut down all the bushes in a large area of the courtyard behind the house, tediously and arduously pulling out all the roots. He then cleared out a huge space to plant a tall type of shrubbery that looked like corn, but didn’t yield any fruit and was used for making brooms.

Initially, this bothered me as a child. Why not plant something more useful? We had some vegetables, such as tomatoes, scallions and horseradish, as well as cherry trees growing in the garden, and our family didn’t make or sell brooms!

Finally, it all made sense when it came time for Sukkos. Around Sukkos time, they added thin-paneled wood (not like the thick plywood used today) to the frame to make walls. My grandfather cut down all that vegetation and used it for schach on our Sukkah! We understood why we needed such a house with an extra courtyard. Obviously, a sukkah was far from legal in Russia, and besides, any construction would require a permit, but we were lucky to have a private courtyard where this could be done unobtrusively.

The sukkah was designed to fit around ten people, but as many Jews didn’t have their own sukkahs, there were often many more than ten. Neighbors, friends, and relatives brought their own bags of food, while some just stopped in to make a blessing. Ten people became 15, and sometimes as many as 20 or 30. We children hung around in and around the sukkah, playing nearby or watching and listening to the animated chassidic conversation and soul-uplifting songs.

I have a very distinct and wonderful image of that sukkah in my mind’s eye. I can still see it literally stretching, as the very thin wooden panels bent outwards to accommodate the occupants within. From the outside, the sukkah grew to look like a gigantic barrel!

When I was very young, my father was in jail for his Jewish observance and desire that his children grow up as real Jews. My mother worked long, double shifts at a vinyl records factory to put bread on the table. Today, you can have a small gadget with earphones and have all the music you want, but in those days, music came on large vinyl records that were played on a “patefon” (phonograph) and was not even connected to electricity.

[In the 50s, in Russia, people had to be happy with what they could get. The shelves in the stores were empty and the cost of merchandise in the markets was sky high. In the 60s, life began improving, and people wanted to buy and listen to music, among other things. Using plastic material to make vinyl records became a flourishing industry.

However, as with all new things in Russia, there were many shortcomings in the manufacturing process. No one was thinking of working conditions, hazardous materials, or following safety rules. The factory producing the records was very active on the black market. The new popular songs and melodies were produced and sold “under the table” for very high prices, sometimes triple or even five times the standard price of a vinyl disk. The Communist government obligated factories to produce not only what was profitable and what people liked, but also enormous amounts of records containing old patriotic songs, and the national opera’s music which was full of propaganda and not sought after by the locals.]

The machinery and the industrial process where my mother worked was not very advanced. You could hardly see or breath from the billowing vapor from the huge vats of melting plastic material, and you would be coughing from the toxic chemical fumes long after work. It was backbreaking labor for my mother.

So practically, I grew up under the watchful eye of Bubbe Reiza. She also took care of Rochel, my sister two years older than me, and my brother Reuven, who was nine years my senior. She could not hear well, as hearing loss was a common complication of childbirth in the beginning of the 20th century. I was her guide going to the market or “gastronom” (grocery), helping to purchase what we needed. Later on in life, I was responsible to go to the pharmacy to refill her prescriptions on time, dispense the pills accordingly, and give her eye drops twice each day.

Not always was my “assistance” so beneficial, though it was very hard to make Bubbe Reiza upset. On one of our shopping expeditions when I was around 6 or 7 years old, I held my grandmother’s hand to the counter of the small market near our home. Usually, all the saleswomen knew my bubbe and me, and they said hello and exchanged small talk about the weather, health, prices, sales and news. Perhaps in the dairy department the saleswoman was new on the job.

We asked, as was our routine, for a small amount (about 300g/10-12 oz) of regular butter, and not to use their dishes. I stood on my tiptoes, and stretched out our own bowl to the saleslady to put the butter in. We never had a problem with using our own dishes.

The workers in the store were usually rough and rude, but to my grandmother somehow, they always showed respect. In this instance, either the Uzbek girl did not understand, this time she was careless, or she was being antisemitic, she poured butter that was melted in their dishes into ours! My grandmother bitterly asked her, “Why did you have to do it? We clearly asked you for a stick of regular butter.”

We left the dish and went home. I saw how pained and offended she was, but she never raised her voice to blame me. I still felt guilty, as if somehow it was my fault. It was very hard to replace a dish.

My grandmother Reiza was wise, very refined, and discreet, and had a keen sense of humor, so her words were priceless. Though she seldom bought for herself, Bubbe Reiza would give a nice amount of her own money to my parents a few weeks before Purim. She requested that they would buy or hire a seamstress to make two new dresses or robes in time for Purim. While giving matanos l’evyonim, my parents faithfully carried out Bubbe Reiza’s charge to seek out poor ladies in our community to quietly give the dresses without mentioning my bubbe’s name. She would stipulate that the job must be done on time and would gladly add money if needed to be sure of this objective.

I once overheard her saying that in order not to impose or to cause any friction by choosing to stay with one of her daughters over the other, she decided to live with us, a daughter-in-law. I know some people were talking about it and even brought it up as an exemplary situation from which other families could learn. All her children and grandchildren always gave her the utmost respect.