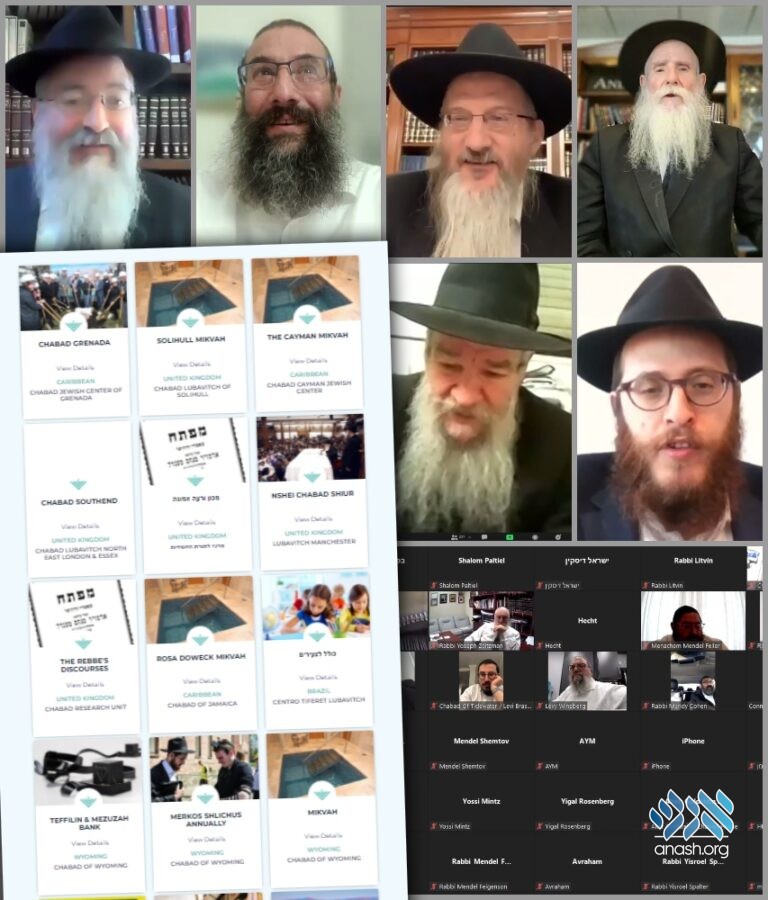 This past Sunday, hundreds of shluchim from around the world heard and shared updates on the hachlata to establish 1,210 new mosdos in honor of the Rebbe’s 120th birthday. Over 70% has already been pledged.

This past Sunday, hundreds of shluchim from around the world logged on to Zoom to hear about the newest project in honor of Yud Alef Nissan, organized by Or Vachom – Igud Hashluchim. Speeches were given in both English and Hebrew to accommodate the wide array of shluchim from various countries.

The resolution to implement this project was first taken by a group of head shluchim a few months ago with key knowledge of the capabilities of their regions and networking with shluchim in their respective region. The Zoom event held last week launched the project to all shluchim and inspired all the attendees to participate while giving practical advice on how it is indeed possible for each shliach to take part.

A video of the Rebbe was shown in which the Rebbe encouraged the completion of 71 new institutions for the by the upcoming Yud Alef Nissan of that year 5733. The Rebbe’s powerful words of encouragement are just as invigorating 50 years later and are especially pertinent as this year, like then, is a leap year. The Rebbe explained that the extra month is an opportunity for extra growth.

The shluchim were addressed by Rabbi Boruch Shlomo Cunin, head shliach of California, who spoke about the special zechus chassidim have to gift the Rebbe with a birthday present. Rabbi Berel Lazar, head shliach of Russia, encouraged his listeners to challenge themselves and push themselves beyond their comfort zones. Rabbi Yossi Hecht, shliach to Eilat, Israel, shared his memories of the first time the Rebbe asked for such an initiative, on the occasion of his 70th birthday. In that year, as per the Rebbe’s request, 71 new institutions were founded.

Vaad Or Vachom – Iggud Hashluchim was represented by Rabbi Kasriel Shemtov, shliach in Michigan. He presented the website www.1210mosdos.com, which allows shluchim to submit their pledges of new Shluchim, mikva’os, Hebrew schools, youth centers, Chabad houses, yearly commitments, or any other project they can start. 70% of the goal has already been pledged, with over 30 committed projects already in place.

Rabbi Danny Cohen, shliach from Chevron, Israel, inspired everyone with his “can-do” attitude and emboldened them to push forward with expansion plans, although they may face financial challenges or feel confined by their small, localized area. His own efforts in escalating the reach of Chabad of Chevron are well-known and serve as an example of what can be accomplished by focusing on the Rebbe’s vision.

Rabbi Yossi Korik’s personal reflections about his own shlichus in California proved that taking on the hachlata for the Rebbe gives the confidence and ability needed to carry it through. Although he started as the lone shliach in his area, he committed to growth and now has a school and has brought down other shluchim to work with him as well.

Many shluchim, inspired by the memories and encouragement of these speakers, have already committed to starting a new shliach, building or new project. This project is an incredible testament to the Rebbe and his dedicated shluchim who will certainly reach the goal of 1210 new mosdos, kindling exponential growth with international reach.

Visit www.1210mosdos.com to learn more and submit your pledge today.