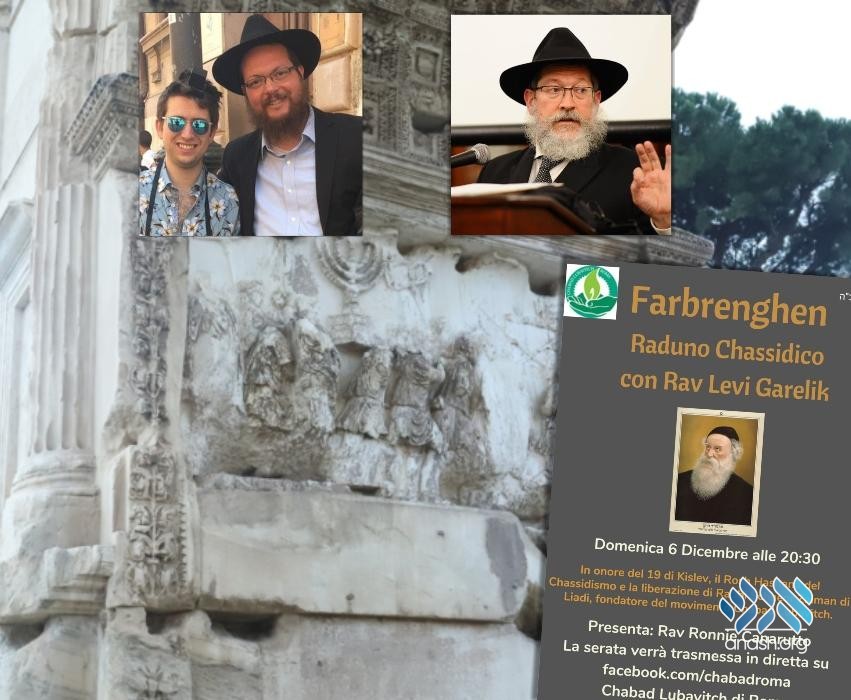 Over 1,100 Jews in Rome and worldwide joined a virtual farbrengen with Rabbi Levi Garelik in honor of Yud Tes Kislev, with Tanya and Chassidus taught completely in Italian.

An incredible 1100 Jews joined a Zoom (and Facebook) farbrengen, organized by one of the Rome shluchim, Rabbi Ronnie Canarutto, on Sunday night. Addressing the online crowd was Rabbi Levi Garelik, Rabbi of the European Union Shul in Brussels and Moreh Tzedek of Bais Shmuel of Crown Heights.

The entire farbrengen, which included a talk on the origins of Chassidus and a synopsis of the first few chapters of Tanya, was conducted in Italian, and, amongst others, Rabbi Garelik pointed out that the translation of Tanya into Italian is part of the process of the Geula.

In the 5720s, Rabbi Garelik recalled, the Rebbe put a strong emphasis on the Tanya’s translation into Italian. The pasuk “Vehaysa l’Hashem hamelucha” -“and Hashem shall have the kingdom”, only comes after “ve’alu moshi’im behar tzion lishpot es har Eisav…” – “And saviors shall ascend Mt. Zion to judge the mountain of Esav”. The mountain of Esav refers to Rome, and Italian is the “language of Esav” as we see that when Yitzchok blessed Esav he said “mishmanei ha’aretz yihye moshovecha” says Rashi “zu Italia shel Yovon”. Thus, the translation of Tanya to Italian is a significant step in transforming and overcoming the klipa of Esav.

Indeed, in a letter to Prime Minister Zalman Shazar, the Rebbe attached a copy of a volume of the Tanya in Italian, and stated that printing the Tanya in Italian – the language of Rome – is a step in the process of the “spreading the wellsprings (of Chassidus)” which hastens the arrival of Moshiach.
Rabbi Garelik also gave a short but deep synopsis of the first four chapters in Tanya, and stressed the idea that its vital to get Yidden to do a Mitzva, even a single mitzvah like Tefillin or Nerios Shabbos Koidesh.

“The response the shluchim in Rome received was Boruch Hashem incredible!” Rabbi Garelik told Anash.org. “A large number of Tanya shiurim were launched as a result of the farbrengen, and many many people were inspired to go out on mivtzoim.”