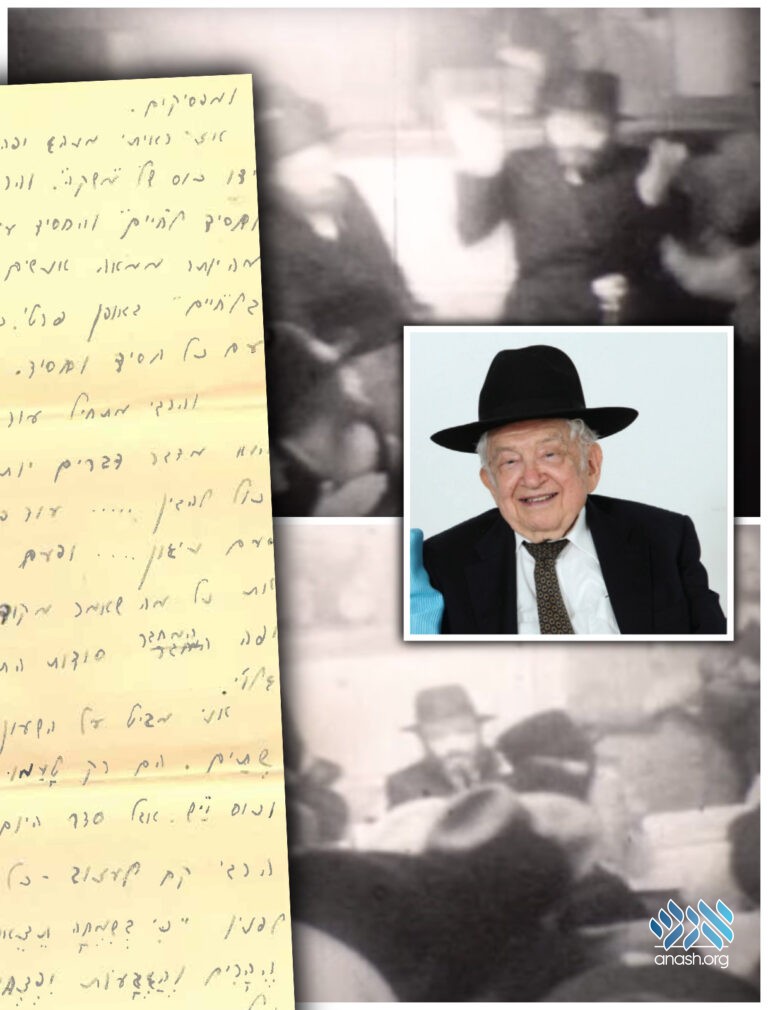 After sitting buried in an attic for seventy years, fascinating accounts by a Litvisher Bochur who wandered into two of the Rebbe’s first farbrengens have been found.

Two letters describing two of the Rebbe’s first farbrengens after accepting the nesius and the Lubavitch ‘arum’ were recently discovered, after lying in the dark for seventy years.

The letters were discovered by Rabbi Akiva Homnick, a well-known Rosh Kolel and Mechanech, among the writings of his father, the 93-year-old Rabbi Yaakov Yitzchak Homnick, a prominent Torah personality in Eretz Yisrael. They were published in a Teshurah in honor of the Hertzel-Greenberg wedding last month.

Rabbi Yosef Yitzchak Greenberg of Alaska, the father of the Kallah, shared with Anash.org how the unique letters made it to his hands.

“When the letters were discovered, they reached out to their Lubavitcher relative, Rabbi Shraga Dovid Homnick of Crown Heights, to see who would find interest in them. He directed them to me, knowing that I — along with Rabbi Eliezer Zaklikovsky — had published Yimei Bireishis, the volume which chronicles the first year of the Rebbe’s nesius.

“When I spoke to Reb Yaakov Yitzchok, I discovered that we already had a connection. He said that his dearest Lubavitch friend was Rabbi Berel Shemtov, who also happens to be my father-in-law. Rabbi Homnick was Rabbi of Detroit’s Young Israel congregation when Rabbi Shemtov arrived on Shlichus in 5718-1957, and he personally welcomed him and helped him settle down. Rabbi Homnick said that in Rabbi Shemtov’s persona he saw a true dedication to the Rebbe and to his Shlichus.”

Before Rabbi Yaakov Yitzchok made Aliya in 1962, he served as a rabbi in Detroit and Philadelphia, and had a very close connection to Chabad; he even merited some ten yechidusen during those years.

However, his connection first began when he wandered into 770 one Shabbos Mevorchim in 5711, and then returned for the Purim farbrengen. He shared those experiences in a series of letters to his Kallah.

“These letters are very unique,” says Rabbi Greenberg, “because they are one of the only authentic descriptions of the early period of the Rebbe’s nesius — from an outsider’s perspective.

“We collected many accounts from the bochurim of that period, but it can often be difficult to get an objective picture from the personal experience of chassidim. But here is an outsider who wandered into 770 without any preconceived notions, and he describes the situation just as they did — the romemus of the Rebbe, the hiskashrus of the Chassidim, and the tremendous excitement that was palpable in 770.

“It is amazing to see how his description – just two weeks after the kabolas hanesius – fully resembled the feeling I remember in 770 during the 5740s. We know that a Rebbe is an atzmi; indeed, we see that there was literally no difference between 5711 and 5741.

“The fact that the letters were discovered after 70 years of lying in some forsaken place is an amazing hashgacha pratis. We see clearly that the Rebbe is sending us a message and helping us strengthen our hiskashrus. Rabbi Krinsky’s letter about Yud Shevat 5711 was recently discovered, giving us a new chayus in Yud Shevat, and now these letters surfaced. As the Rebbe wrote in those early years, ‘Der Rebbe vet gefinen a veg tzu entferin…’”

The following are selections from those letters:

“The room in which they daven is not very large … but I noticed something strange: about 150 people were crammed into one side of the room, while the other half had only about ten people altogether.

“When I looked again, I understood; the Rebbe stood on the other side. In order to allow him to see the amud and hear the Chazzan, they left that side of the room for him and the elder Chassidim. On the other side, it was standing room only…

“I tried to get closer to the Rebbe to get a closer look. He is tall with a round black beard… He is clearly very calm and collected. He davens without moving at all. He doesn’t even lift his eyes from the Siddur.

“After davening, everyone rushed to the Rebbe’s side. He would soon be speaking, and everyone wanted to get close to hear every word that he uttered….

“He speaks in a low voice, and his words flow from his mouth like a gushing spring, and he never has to stop to look for a word… He speaks quickly and in a tune. The chassidim stand around the table with their eyes closed, deep in thought, listening to every word that leaves his mouth. He speaks about secrets of the Torah.

“In Lubavitch, they celebrate Purim unlike other Chassidim. They also sing and dance, but the main thing is the Torah from the Rebbe. People stood over each other’s heads, on chairs, benches and tables, in order to see the Rebbe and hear his voice.

He then described a long and fascinating conversation he had with the Rebbe. We hope to publish it in the future.