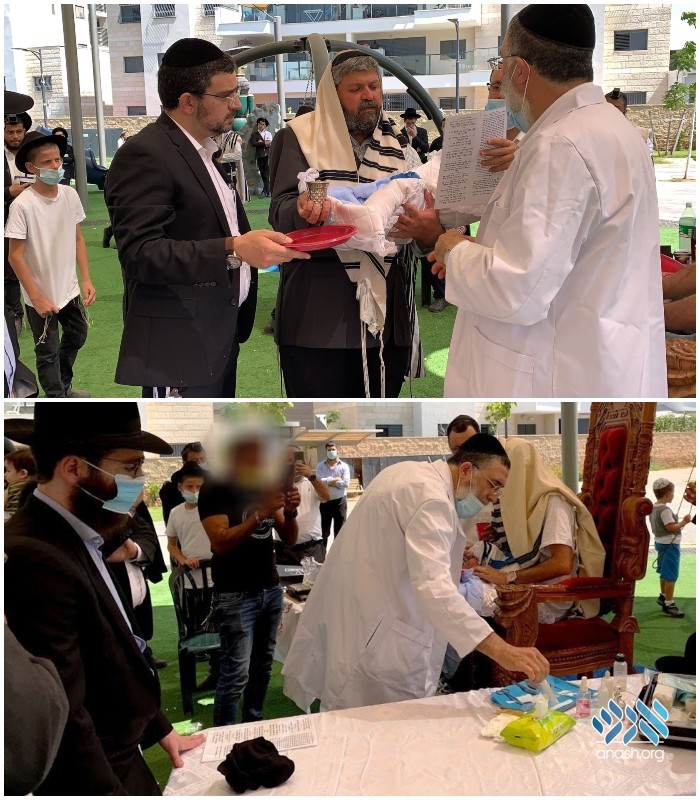 Dozens of regular participants at an outdoor minyan held every morning in a park in Sha’ar Ha’ir, a new Chabad neighborhood in Lod, merited to participate in a very special Bris Milah.

Dozens of regular participants at an outdoor minyan held every morning in a park in Sha’ar Ha’ir, a new Chabad neighborhood in Lod, merited to participate in a very special Bris Milah.

The story begins two months ago when a young Jewish girl from Lod who was involved with a Muslim youth took advantage of the fact that he had been arrested abroad for a crime committed in a foreign country to sever her ties with him. The girl contacted Yad L’Achim for advice on how to go about it and how to win the custody battle for the baby she was carrying.

Eight days ago she gave birth to her first-born son and asked that he be brought into the Bris of Avraham Avinu at the proper time.

Yad L’Achim tried to find a shul that was open in the later hours of the morning in which to host a Bris, together with a minyan of mispallelim, but came up empty-handed. Alternatively, it looked for an outdoor minyan that was being held in a shaded place and find one in the heart of the park in the new neighborhood of Sha’ar Ha’ir near the western entrance to Lod. The regular participants of the minyan were only too happy to participate, and even helped Yad L’Achim get hold of a “Kise Shel Eliyahu” from the main shul of the adjacent Chabad neighborhood.

The emotional high point came when the person who runs the minyan, Harav Mordechai Michaelshvili, who was honored with the brachos, said with great emotion, “raise this boy to his people and his mother.” Many of the participants said the Bris was an opportunity for them to see another aspect of their Pidyon Shvuyim activities.

Harav Moshe Cohen, who organized the Bris on behalf of Yad L’Achim, thanked the mohel, Harav Yishai Dahan, from the Bris Yosef Yitzchak organization, who volunteered to circumcise the child.