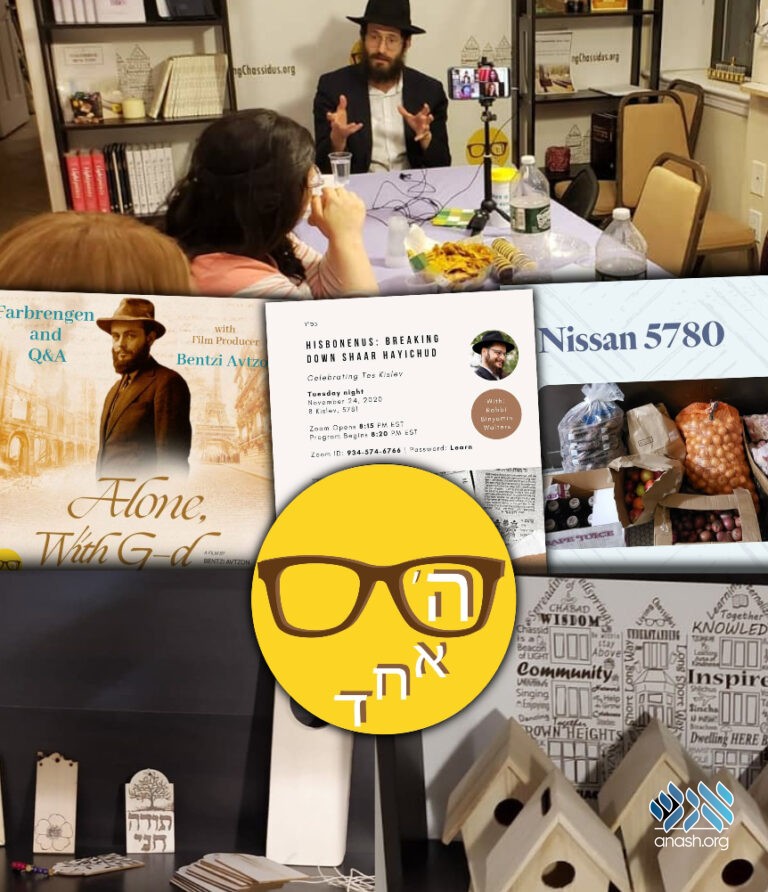 The Crown Heights based Living Chassidus organization for women was created in 2012 for local women, but when the pandemic hit, it began servicing and assisting Chabad women from around the country.

When lockdown began, people were forced to cancel their Pesach plans and face the daunting task of making the seder alone. How to kasher, to what extent to clean, and what foods to serve were some of the questions people struggled with. Many young women received material and spiritual guidance for this difficult period from the leadership and members of Living Chassidus.

Living Chassidus is a Crown Heights-based organization for women, although there are many out of town members. It was created by Rabbi Sharon and Michal Weiss in 2012 in response to women who were using self-help books to deal with their challenges. The couples’ goal was to take Chassidus out of the classroom and apply it to the lived experience. While the organization does arrange shiurim on maamarim and other works such as Shaar HaBitachon, much of the discussion centers around how the knowledge can be enacted in daily life.

Living Chassidus gives a great deal of credence to the “living” aspect of its name by organizing talks from speakers about health, financial planning, and family life. Aside from giving over knowledge, Living Chassidus provides a framework for Chabad women to socialize and network. They match up women with warm hosts from the Crown Heights community and host melava malkas and activities on motzei shabbos. Job placements, apartment shidduchim, and real shidduchim have come about through the organization.

Instead of being limited by COVID restrictions, Living Chassidus actually broadened its reach to out-of-town participants and incorporated geographically diverse speakers into its programs. Living Chassidus immediately switched to a fully Zoom format when lockdown started, beginning with a shiur for Pesach based on two of the Rebbe’s maamarim, and a mock seder using Simon Jacobson’s Guide to a Meaningful Seder. This is in addition to Whatsapp group support, menu ideas and food distribution. Sharon and Michal Weiss handed out packages with beautiful plates and cutlery for members to use at their own seder tables. The matching table settings created a feeling of connection.

Between Pesach and Shavuos, Living Chassidus created a new program called Make It Count. The program embodied the value of time and was accompanied by the learning of the foundational maamer Lo Sihyeh Mishakeila 5712, which has a focus on using time wisely. Speakers included Mrs. Shaindy Jacobson who read from her father’s diary about his experience hearing the Rebbe give over this exact maamer, Mrs. Rucheli Berry on productivity from a Jewish perspective, and Mrs. Eidle Sputz on successful goal setting. Before Shavuos, Rabbi Yisroel Glick farbrenged with the group over Zoom about how to get excited for receiving the Torah. In addition to the amazing speakers which were accessible to all, participants in the program were able to earn a prize of their choosing after working on various life goals throughout sefira.

Living Chassidus experienced an unprecedented demand for programming during the summer months. Living Chassidus stepped up to the plate with a maamer from Kuntres Bikkur Chicago of the Frierdiker Rebbe on the topic of bitachon. The group got into deep discussions about how the material applies to current events, and about how the Nasi haDor is our Raayah Mehemnah who fosters bitachon. In Tammuz, Living Chassidus had a showing of the documentary Alone With G-d, about the Rebbe’s reshimos, followed by a Zoom Q and A with producer Bentzi Avtzon. Living Chassidus also hosted a course on Lashon haKodesh, taught by Mrs. Chaya Mushka Dexter. The 20 participants learned 200 vocabulary words, tenses, and grammar rules, and gained the skills to translate davening and chumash.

Living Chassidus put out the SAI Kislev program for the Chassidishe Yomim Tovim of Kislev and Teves. Twenty-six women, including eight from out of town, studied daily readings from a compilation of sources related to significant days on the Chabad calendar. Prizes for completing the weekly learning quotas included a sushi spot card, a tour of the Rebbe’s Library, a kuntres for Yud Tes Kislev, the maamer Lecha Dodi from the Lessons in Maamarim series, and The Four Keys to Kabbalah by Rabbi Yisrael M. Rice. Program participants and the general public got to hear from Rabbi Yisroel Glick, Mrs. Tzivia Jacobson, and Rabbi Ahrele Loschak of Crown Heights as well as Rabbi Benyamin Walters from Chicago and Rabbi Ari Shishler from South Africa.

Living Chassidus recently celebrated its eighth anniversary and is looking forward, im yirtzeh Hashem, to many more years of service to the community. To learn more about Living Chassidus’ programs, visit LivingChassidus.org or get in touch with the directors at

Check out our recent programs:

I Had a Baby, Now What? With Henna Shomer

Let’s Get Organized with Rivka Caroline: