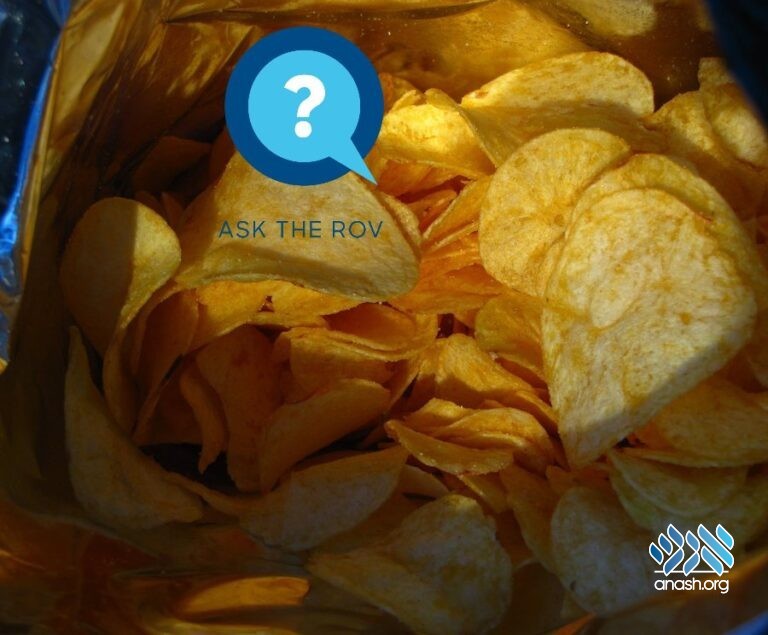 Ask the Rov: What is the best way to open a bag of chips on Shabbos? Do I have to worry about ripping letters?

A full-fledged utensil may not be built or dismantled on Shabbos due to the melachos of Boneh and Soser (building and dismantling). Yet, the Gemara says that one may rip open a container fashioned from palm leaves to access the food inside it.1 These “flimsy” containers aren’t subject to the prohibition of Soser, especially because they are subordinate to the food inside and don’t have significance on their own merit.2

Regarding the opening of cans, some poskim recommend rendering them unusable before opening to circumvent the prohibition of “building” a usable can (see issue 311). This isn’t necessary for bags, which are seldom reused. While some poskim hold the contents must be emptied right away, the custom is to be lenient and allow using the bag until the contents is consumed.3

What about the melacha of Korei’a (tearing)?

Chazal state that one may tear the skin covering of a barrel, provided one doesn’t make a nice opening (which would transgress Makeh B’patish, perfecting a utensil).4 Some poskim explain that this destructive tearing is only midrabanan, and an allowance is made for the sake of food and possibly other Shabbos needs. However, the Alter Rebbe holds that Korei’a only applies to separating two pieces that are attached, but not to a substance that is a single entity, such as the skin on the barrel, or paper or plastic in our times.

Separating a bag at its glued opening would be prohibited. Some claim that according to the Alter Rebbe there must be a third substance that attaches the two parts, and today’s snack bags that are heat-sealed without glue (as is apparent from the lack of a sticky residue) may be opened.5 Others don’t see a basis for such a distinction, and moreover, argue that the melted plastic could be considered a “third” substance.6 In practice, since the snack bag was sealed to be opened, one may combine both arguments to be lenient, yet it is preferable to cut the bag open elsewhere.

If the package has a perforated line where to rip, some poskim are concerned for the melacha of Mechatech (cutting to a specific size).7 Yet, others counter that this isn’t one’s intent, and the furthermore, the bag has no importance.8 In practice, one may be lenient.

Of course, when tearing a package, one must avoid ripping the print on the package. However, as long as one is cautious, one needn’t be concerned if letters are torn by accident, since this is unintended (davar she’eino miskavein) and it not inevitable (psik reisha).