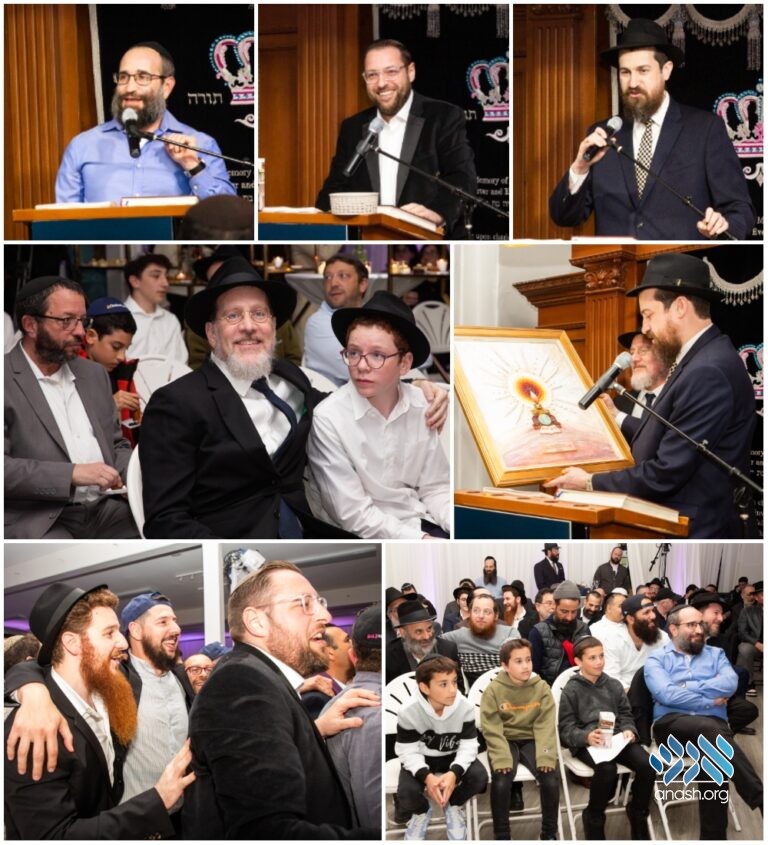 Rabbi Avraham Zajac and the hundreds who watch his daily Gemara shiur on Chabad.org finished the entire Shas after 7.5 years of study. Students, family and friends gathered to celebrate.

At 6:10 a.m., Sunday through Friday, dozens faithfully gather for an hour-long Talmud class with Rabbi Avraham Zajac, director of Chabad-Lubavitch of South La Cienega (SOLA) in Los Angeles. The study group has slowly leafed their way through the Talmud’s 2711 folios almost three times. Learning a page a day, it takes them seven-and-a-half years to complete the entire Talmud, and he’s been teaching since 2004, when he founded Chabad SOLA.

Every day, the rabbi is joined by hundreds of students who watch his classes on Chabad.org, where they have been streamed for the past 7.5 years. On March 9, the final class to complete the Talmud was given, and Rabbi Zajac was joined by students, family and friends at Chabad Sola.

As the classes began to be streamed on Chabad.org a third of the way through the daily cycle, this class wasn’t on the Talmud’s last page; it’s about a third way in, finishing Tractate Chagigah, the 13th of 63 tractates.

The class is unique in the way it weaves Chassidic teachings into the Talmud, says Zajac. “The Talmud can get very legalistic and technical without blending it with Chassidut,” the rabbi explains.

“He has so much passion and excitement for the learning,” says Yaakov Komaiko, 36. Komaiko says he wasn’t looking for such a class; it was his wife’s doing. When they moved to the neighborhood, they invited Zajac to affix their mezuzahs. “My wife saw his greatness,” he recalls, and she asked the rabbi about his classes. Zajac told her about the daily Talmud study group, and she cajoled her husband into attending. “And I haven’t missed a day since,” Komaiko adds. “He explains things with such clarity.”

Komaiko says anyone can study Talmud. For his first year attending, he wasn’t able to follow the classes entirely. But slowly, he says, he began to understand more and more, until he was able to follow the entire class and fully comprehend each folio. “I feel such a sense of community and brotherhood there,” he says. “People feel connected to Rabbi Zajac even if they’ve never met him.”

At the beginning of the pandemic, Komaiko moved to Phoenix, Ariz., before the birth of their second child. He says it was a seamless transition, because he was able to stay with the class online. More than a teacher of Talmud, Komaiko sees Zajac as a role model. “I feel he’s given me a model of how to live. He is an incredible blend of assertiveness and presence without ego, a true Chassid.”

Rain or shine, whether in Los Angeles, Brooklyn, or a Moscow airport, Zajac doesn’t skip a day. “Heaven and earth cannot stop him from teaching Torah,” attests Komaiko. Zajac makes sure that the class is always at the same time, whether it means starting at 4 a.m., or midnight. Though, Zajac says, he tries not to travel alone. He takes his students with him to New York to the resting place of the Rebbe—Rabbi Menachem M. Schneerson, of righteous memory—and they spend Shabbat nearby.

Representing the Chabad.org team, Rabbi Moshe Berghoff, the site’s IT director, noted the impact of the class. “It’s not just a shiur (“class”) in the morning; you’re living with it. It’s your daily bread.” Paying tribute to the rabbi, his wife, Stery, and all the steady participants, Berghoff praised the “complete dedication to this monumental Torah study project and your partnership with Chabad.org. We wish the entire community to go from strength to strength.”

Zajac’s study group is open to men and women, and he says that the commitment that mothers of children make to attend at 6 a.m is “awe inspiring.” In fact, he shares proudly, the tractate they just finished had equal participation of women and men. “The Torah is shared equally by men and women,” he says.

Ahuva Gamliel, of Hollywood, Fla., recently joined the Talmud classes on Chabad.org and says it gave her a more holistic understanding of Judaism. Speaking on a mini-documentary produced for the event by Chabad.org, Gamliel said that her childhood Jewish education taught her “all about what we do, but not so much of the spiritual reasons behind the rituals, traditions and practices. I was thirsty for that,” she acknowledges. Browsing Chabad.org, she stumbled upon Zajac’s Talmud class. “He made the material come to life; he made it so interesting,” Gamliel says. “He’s so enthusiastic, it really makes the students feel more connected and more engaged with the lesson.”

Dr. Bruce Ruben, a Detroit, Mich., resident, was looking for a Talmud class, thinking the Talmud was “a manual for Jewish ethics,” and an intellectual exercise. But now, after years of study, he’s discovered what it really is, above all else: “It turns out that it’s a way to connect to Hashem.”

Komaiko feels a sense of pride and accomplishment as he completes yet another tractate. “I want people to know that most of us never thought we do this,” he said as Zajac led the group in reciting the words that mark the completion of a section of Talmud: “We will return to you tractate Chagigah and you will return to us; our mind is on you, and yours is on us. We will not forget you and you will not forget us—not in this world and not in the next world.”

Full listing of all the Gemara shiurim: Chabad.org/RabbiZajacTalmud

Link for the day’s class: Chabad.org/DailyTalmud