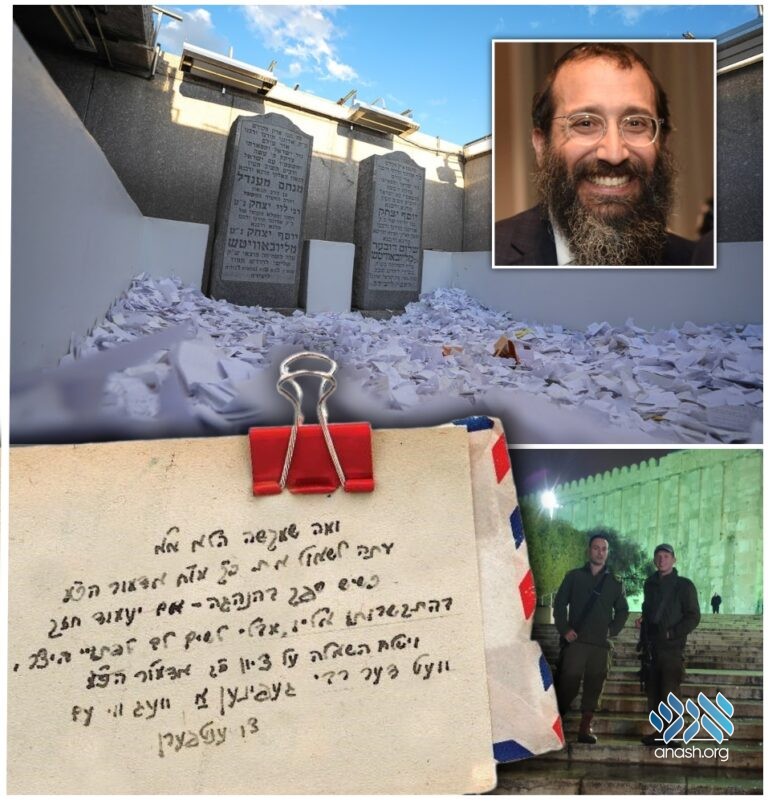 In the summer of 5780, a family from Fort Washington, PA, started planning their aliya to Eretz Yisroel, when one problem after the next started piling up. Seeing their predicament, their shliach suggested they pay a visit to the Rebbe’s Ohel…

The following story is a column from the Iyar issue of A Chassidishe Derher. Get every month’s Derher delivered to your door by subscribing here.

Matthew and Barbara Zucker had been coming to our Chabad House for several years and were making tremendous strides in Yiddishkeit. Over time they learned more about the kedusha of Eretz Yisroel and with their children already grown and out of the house they decided to fulfill their dream and move to Eretz Yisroel before Rosh Hashanah of 5781.

During the summer of 5780, while preparing for their move they encountered several serious problems and asked me to join them on a trip to the Ohel to ask the Rebbe for a bracha.

I joined them for the two-hour drive to New York and on the way they shared with me the main issues they wanted to write to the Rebbe about.

Firstly, one of their sons is currently in the IDF and stationed at the Lebanon border and they had not communicated with him for several weeks already. They were especially anxious since the last time they were in contact with him he said that he will reach out again in two days when he returns from field duty. Hearing in the news that there was an exchange of hostilities involving his base only added to their worry.

When he was previously stationed in Chevron they were in constant contact with him. In addition, they were very appreciative of the work that Rabbi Danny Cohen and the other shluchim there do on behalf of the soldiers, and now that they weren’t even getting the periodic WhatsApp messages from him, they were becoming very nervous.

With regard to their anticipated move to Eretz Yisroel they were having trouble with some of their documentation, which was being exacerbated by the Covid shutdowns and they were nearing a certain deadline that would impact the financial aspects of their aliya.

A third problem that came up was the fact that a major part of their decision to move to Eretz Yisroel was based on Barbara’s job in the pharmaceutical industry which allowed her to work from anywhere in the world. Due to Covid, her specific specialty had become obsolete for the foreseeable future, and they were now facing a major life change without a reliable source of parnasa.

Another topic that came up in our conversation was their concern for their older son who was staying in the United States. He had started researching Eretz Yisroel for a college paper and had become extremely disillusioned once he discovered the secularism that characterized the establishment of the modern state and developed a sense of apathy for their move there. His attitude deeply concerned them, especially since they sensed that his apathy extended to all of Yiddishkeit.

At the Ohel I guided them in writing their letters and what tefilos to say, and they had a very moving experience.

We continued on to Crown Heights, ordered take-out and spent some time at my mother’s home. We discussed their upcoming move and I explained to them that since Eretz Yisroel is a holy land, it is important to live a holier life there. I encouraged them to commit to observe more mitzvos and to be sure they will connect with a community and a shul when they settle in. Matthew committed to putting on tefillin daily and together, Barbara and Matthew committed to keeping kosher.

After a two-hour drive back to Fort Washington they dropped me off at my home and continued on to their home which was approximately 15 minutes away.

Five minutes after walking through my front door, I got a call from Matthew.

“Rabbi,” he said full of emotion, “I needed to pull over on the side of the road and call immediately to share with you what just happened.”

Minutes after leaving my home their son in the IDF called. This was the first phone call from him in weeks and he shared with them that all is well, and in addition, he received permission from the army to take off a month when they arrived in Eretz Yisroel to help them settle in.

“This is the best news we could have wanted to hear from our son, and we got it so soon after praying at the Ohel,” Matthew said. “I’m sure the rest of the Rebbe’s blessings are on the way.”

When they arrived home Matthew shared with his other son the amazing miracle that just occurred and to his astonishment, his son pulled out a photo of the Rebbe from his wallet and said, “What are you so amazed about? This is what the Rebbe is all about!”

It became clear to them that his apathy towards the Israel issue had nothing to do with his attitude to Yiddishkeit.

Within a week or so, all their documents were in order and they were able to make the move in a smooth and easy fashion. Once they arrived in Eretz Yisroel, Barbara’s career started picking up again, so their parnasa troubles were taken care of as well.