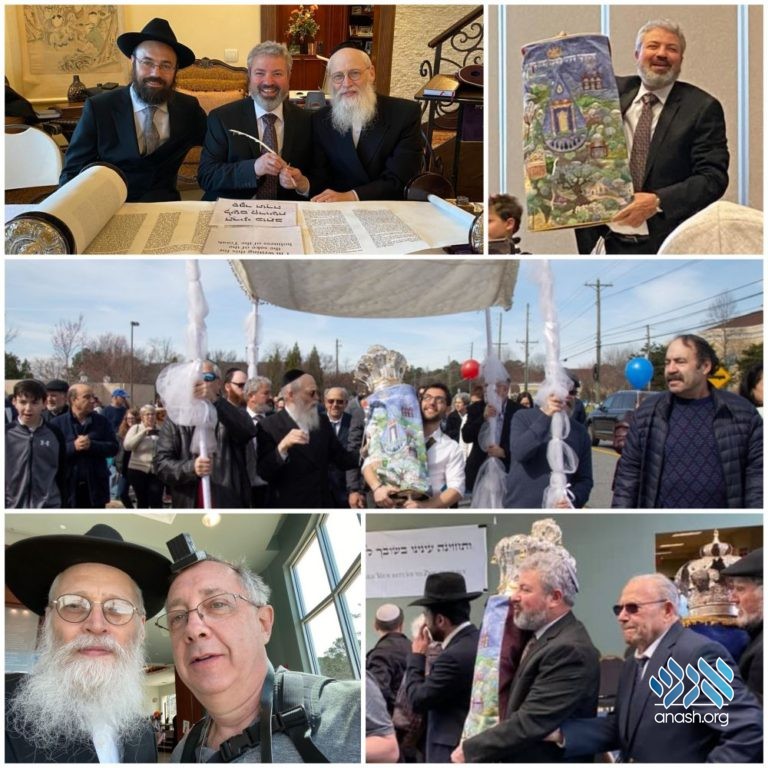 This Sefer Torah was written at Eretz Yisrael’s holiest sites. Now, the Atlanta community that orchestrated its unique journey has brought it home, at last.

On Sunday, the Chabad community of Cobb County in Atlanta, Georgia gathered to welcome a unique Sefer Torah.

Over two years ago, congregants Eyal and Aviva Postelnik and their shliach Rabbi Ephraim Silverman wished to write a Torah that would tell the story of Eretz Yisrael and Am Yisrael in an unforgettable way. They decided to have the sofer leave parts connected to specific mekomos hakedoshos unfinished, so that they could be filled in at the actual place.

Last summer, a group from the community did exactly that. They traveled around Eretz Yisrael with the Torah and a sofer, and carefully selected portions were filled in at the holy sites that related to them. Upon arriving back in America, they brought the Torah to the Ohel, where they filled in the words ‘V’ata Tetzaveh’, on which the Rebbe’s final maamar is based.

As it happened, Mumbai survivor Moshe Holtzberg was there at the same time celebrating his hanachas tefillin, and was honored with filling in a word. Several months passed, and the time came to bring the Torah home.

On Sunday, more than two hundred people gathered to watch as the final letter was filled in at last. At the moment of its completion, the crowd burst into spontaneous song and dance. This has been an exciting few days for the Chabad of Cobb community; Rabbi and Mrs. Silverman, their beloved shluchim, married off their oldest daughter just last week.

Once completed, the Torah was paraded through the streets of Cobb, then brought to its new home in the Chabad House’s main sanctuary. Following the ceremony, many of the proud participants put on tefillin with the equally exuberant sofer, Rabbi Moshe Klein.