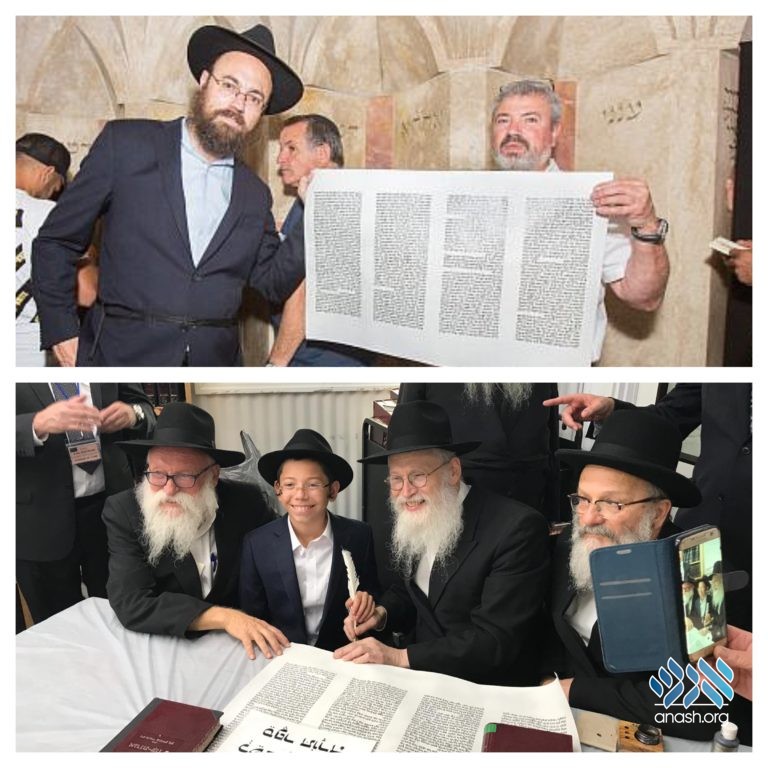 Last Wednesday, a one-of-its-kind Sefer Torah was brought to New York to be completed at the Ohel.

2 years ago, Mr. Eyal Postelnik of Cobb County, Georgia decided to commission a Torah for his community. Together with shliach Rabbi Ephraim Silverman, he set out to create a unique Torah writing experience, something that had never been done before.

“This is a first, historic Torah,” Rabbi Silverman said. “The underlying concept was to write a Torah in a way that would highlight the eternal relationship between the Jewish people and the land of Israel.”

Unlike tefillin and mezuzos, a Sefer Torah does not need to be written in any specific order. And so, an idea was born. Most of the Torah would be completed ahead of time; select portions, however, would remain blank, to be completed in holy places in Eretz Yisrael which share a connection with them.

In May, the pair set off on their mission. During their trip, they visited many significant locations, among them Shiloh, kever Rachel, and Avraham’s well in Beersheva.

“With a scribe, a photographer and a group of people, we went on a historic journey around the land of Israel to historic and holy sites and wrote the words that spoke about those locations and the events that happened there,” Rabbi Silverman said. “We weren’t just standing there; we were connecting with the story through the quill.”

In each place, Mr. Postelnik attempted to include as many organizations and people as possible. “Soldiers that just passed by who wanted to write a letter in the Torah were given the opportunity,” he said. “It’s not our Torah, not our synagogue’s Torah, not our families’ Torah, it’s the Jewish nation’s Torah.”

Last week, the Torah made its way to New York, where a special ceremony had been planned to take place at the Rebbe’s ohel. The portion chosen to fill in on this special occasion was V’atah Tetzaveh, on which the Rebbe’s last maamar is based.

Mumbai survivor Moishy Holtzberg, whose hanachas tefillin had just been celebrated, was present at this one of a kind event. Flanked by his grandfathers and sofer Rabbi Moshe Klein, he was honored with filling in a word.

The Chabad of Cobb community hopes to welcome the new Torah home in March of 2020. A documentary that will tell the story of its unique journey is in the works.