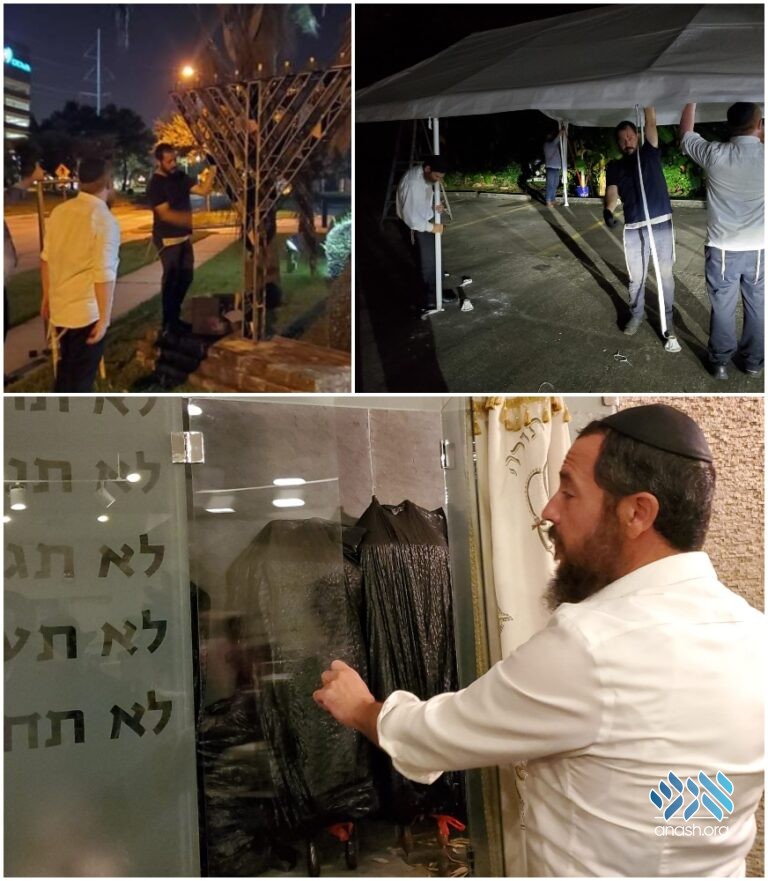 As Hurricane Ida makes landfall on the 16th anniversary of Hurricane Katrina, shluchim in Louisiana hunkered down and prepared to help their communities with whatever the hurricane might bring.

Chabad emissaries in Louisiana were hunkered down and ready to help their communities deal with whatever Hurricane Ida brings as the intense Category 4 storm made landfall near Grand Isle, La., Sunday afternoon.

Ida’s arrival comes on the 16-year anniversary of Hurricane Katrina, which led to massive flooding in New Orleans and other parts of Louisiana and Mississippi and killed more than 1,860 people.

“It’s déjà vu,” said Rabbi Yossi Nemes of the Chabad Center of Metairie, who rode out Katrina in his home and is doing so again. “Right now, we are not scheduled to get the full brunt of the storm, but we are in the hands of G‑d.”

Nemes estimates that about half of his community has chosen to remain at home, where officials anticipate winds of 80 to 90 miles per hour at the height of the storm.

Louisiana has invested in major upgrades to its levee systems, which failed during Hurricane Katrina and contributed to the massive flooding. Officials have also made upgrades to communication and other systems and believe they are in better shape to handle the storm. Though they are not taking things lightly, especially as a surge of coronavirus patients in recent weeks has overwhelmed local hospitals.

“This is a major, major storm that’s going to test us in ways that we’ve not been tested before, for a lot of reasons, but this COVID situation is certainly one of them,” Louisiana Gov. Jon Bell Edwards said Sunday morning during an interview with Face the Nation.

Most College Students Sheltering in Place

In Baton Rouge, La., which is about 100 miles north of the Gulf of Mexico and in the direct path of Ida, Rabbi Peretz Kazen of Chabad of Baton Rouge, told Chabad.org, “We’ve been in touch with members of our community and students at Louisiana State University to see who is in town, and we are at the ready to be of assistance.”

Kazen estimates some 300 Jewish undergrad and graduate students attend the university, most of whom remain in town.

In New Orleans, Rabbi Mendel Rivkin of Chabad-Lubavitch of Louisiana said that the “vast majority” of his community are riding out the storm at home. His congregation’s Torah scrolls remain in the synagogue ark and are expected to be safe there because the building is raised above street level and the room with the ark—which is also elevated—has very few windows.

In Metairie, 10 miles east, Nemes said a large menorah made of steel and stained-glass shards from Katrina that sits outside the Chabad center was taken down and moved inside. The congregation’s four Torah scrolls were wrapped in heavy plastic bags before being placed back in the ark.

Focus on the Elderly and those at Home Alone

All of the emissaries are in regular contact with members of their communities who have chosen to remain at home, and are paying special attention to one particular group: older residents who live alone.

“We have a list of all residents who live alone, and we are checking in with them regularly. A lot of older people who are alone, for whatever reason did not evacuate,” said Nemes. “When you’ve lived here long enough and you’ve ridden out many storms, you don’t rush to leave.”

“This is moving very quickly and we are hopeful by the middle of the night tonight it will have moved past us,” said Rivkin. “Then, we will have a sense of what the impact is, and what the long-term concerns will be.”