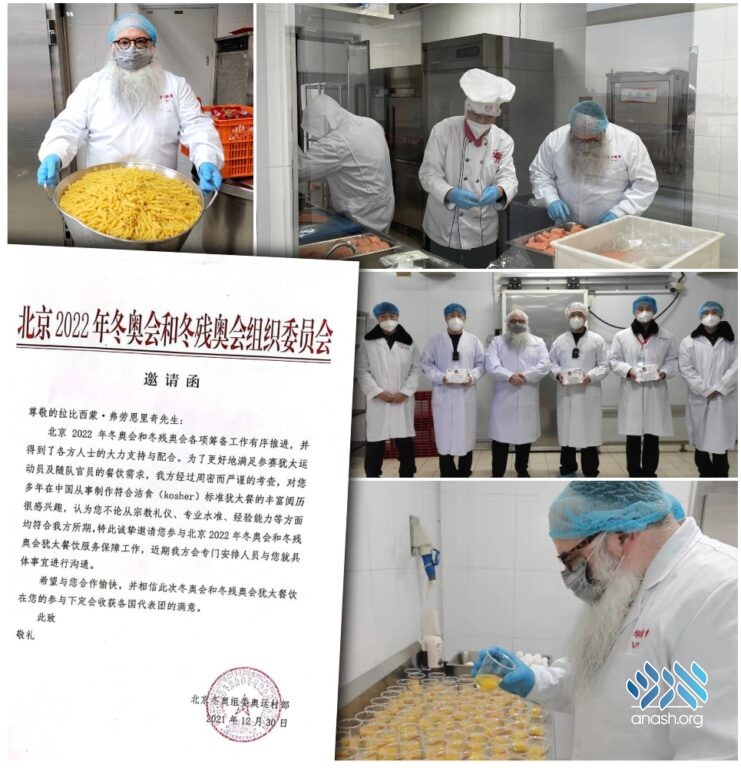 When officials at the Beijing Organizing Committee for the 2022 Olympic Winter Games needed to provide Kosher food and services for Jewish athletes, they knew where to turn: To Beijing Shliach Rabbi Shimon Freundlich.

When officials at the Beijing Organizing Committee for the 2022 Olympic Winter Games needed to provide Kosher food and services for Jewish athletes, they knew where to turn: To Chabad.

“To ensure the catering for Jewish athletes and their accompanying teams our committee performed extensive and detailed investigations, as a result of which got interested in your extensive experience in the area of producing kosher food in China,” the organizing committee wrote to Beijing Shliach Rabbi Shimon Freundlich.

“We reached the conclusion, that you fully fulfill our requirements in the areas of religious ethics, professional standards as well as experience and abilities. We hope for a delightful cooperation and are convinced, that with your participation the kosher food production for this Olympic and Paralympic Winter Games will be to the satisfaction of all participating countries’ delegation,” they wrote.

Rabbi Freundlich immediately accepted the invitation, saying he was “humbled and honored” to serve the needs of the Jewish visitors.

“China has gone above and beyond in their preparations for the Jewish personal participating in the Winter Olympic games,” he told Anash.org. “They have made sure that the highest standard of Kosher supervision as well as 5 star quality food is available in abundance. In addition, any and all Jewish services have been organized upon request.”

The shliach noted that Chabad Beijing is and always has been here for China and the Chinese people in any capacity, saying that “we don’t only take from the society we live in, we also give back”.

“China as a country, as well as the Chinese people have always welcomed Jews even when others turned us away. Beijing, Harbin, Nanjing, Shanghai and Tianjin served as safe havens for Jews before and during WW11,” he said.

“Now once again, in a world unfortunately of growing anti-semitism, China has proven to be a model country demonstrating just the opposite. A country of inclusion, understanding, appreciation and respect for all the Jewish communities across China,” he said.

Together with Beijing Xinhua Airport Catering Company. Ltd, and under the direction of Executive Chef Zhang Chunjie, Chabad Beijing prepared 1500 meals including breakfast, lunch and dinner.

From the finest salmon, to imported Glatt Kosher South American beef, the state of the art kosher kitchen located at the Beijing Xinhua Airport Catering Company’s facility prepared these meals in compliance with and adherence to the highest Kosher standards as well as local and international requirements for food safety.

“As director of Chabad Beijing and Rabbi of the Beijing Jewish Community I thank the Chinese government for all that they do for us and for giving us the gift of calling this great country our home away from home,” Rabbi Freundlich said.