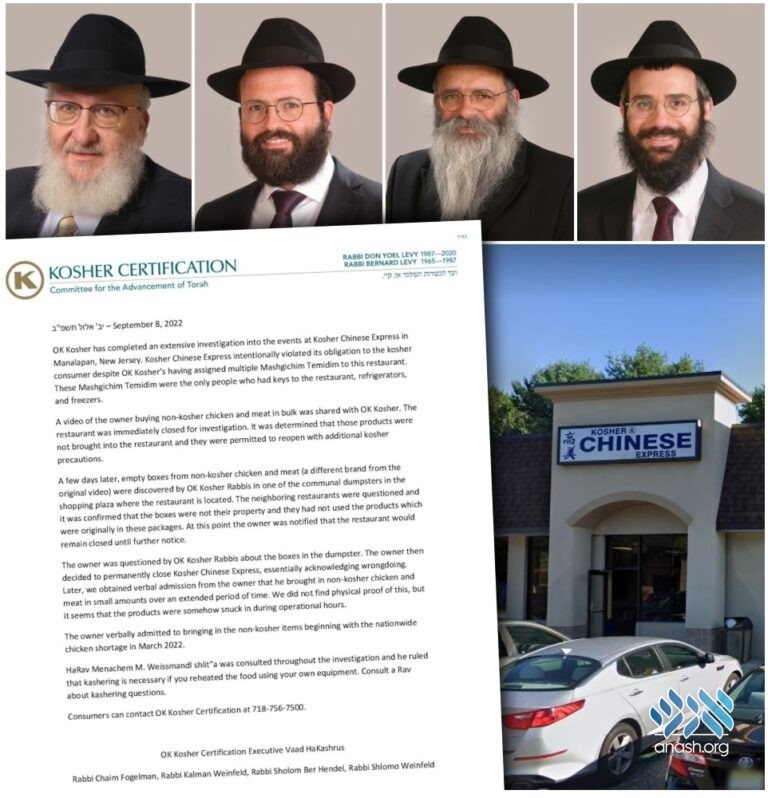 OK Kosher has issued a statement detailing the events behind the kashrus scandal at Kosher Chinese Express in Manalapan, New Jersey, explaining the exact timeline of events.

OK Kosher has issued a statement detailing the events behind the kashrus scandal at Kosher Chinese Express in Manalapan, New Jersey, explaining the exact timeline of events.

The following statement, signed by the leadership of OK Kosher, was sent by OK Kosher to Anash.org:

These Mashgichim Temidim were the only people who had keys to the restaurant, refrigerators, and freezers.

A video of the owner buying non-kosher chicken and meat in bulk was shared with OK Kosher. The restaurant was immediately closed for investigation. It was determined that those products were not brought into the restaurant and they were permitted to reopen with additional kosher precautions.

A few days later, empty boxes from non-kosher chicken and meat (a different brand from the original video) were discovered by OK Kosher Rabbis in one of the communal dumpsters in the shopping plaza where the restaurant is located. The neighboring restaurants were questioned and it was confirmed that the boxes were not their property and they had not used the products which were originally in these packages. At this point the owner was notified that the restaurant would remain closed until further notice.

The owner was questioned by OK Kosher Rabbis about the boxes in the dumpster. The owner then decided to permanently close Kosher Chinese Express, essentially acknowledging wrongdoing.

Later, we obtained verbal admission from the owner that he brought in non-kosher chicken and meat in small amounts over an extended period of time. We did not find physical proof of this, but it seems that the products were somehow snuck in during operational hours.

The owner verbally admitted to bringing in the non-kosher items beginning with the nationwide chicken shortage in March 2022.

HaRav Menachem M. Weissmandl shlit”a was consulted throughout the investigation and he ruled that kashering is necessary if you reheated the food using your own equipment. Consult a Rav about kashering questions.