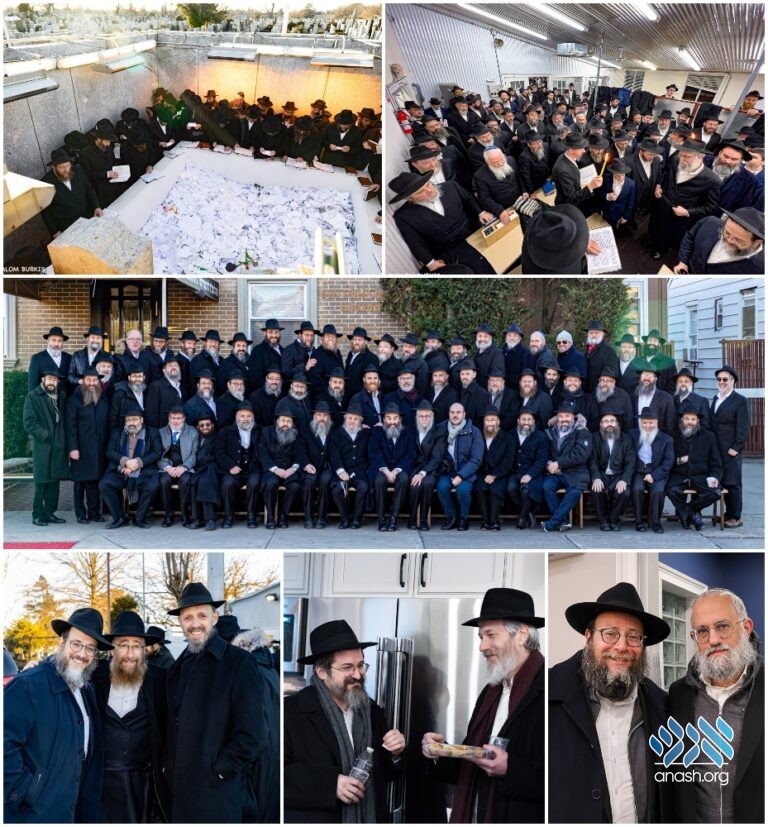 This Shabbos at the Ohel, a historic and first-ever event took place, when close to 70 classmates of the “class of 5752” (1992) converged for a weekend of learning, farbrengens and reconnecting, 30 years since being together in Yeshiva Oholei Torah.

This Shabbos at the Ohel, a historic and first-ever event took place, when close to 70 classmates of the “class of 5752” (1992) converged for a weekend of learning, farbrengens and reconnecting, 30 years since being together in Yeshiva Oholei Torah.

The weekend featured a truly packed minute to minute schedule, all of which was delivered by actual classmates, utilizing in-house talent, with no ‘guest speakers’. Each classmate was given the opportunity if he so wished, to speak throughout the reunion – all in the spirit of ‘Sheves Achim Gam Yachad’ and ‘Ish Es Re’ehu Yaazoru Ule’achiv Yomar Chazak’.

The event marked the 50th birthdays of the class, all born during the Rebbe’s Shnas Hashivim in 5732 (1972). The classmates decided to come together in a collective birthday celebration, together by the Rebbe’s Ohel, in the spirit of the Holy place, to be inspired, uplifted and refreshed, after receiving the Rebbe’s Holy Brochos and going into the Ohel collectively and in unison.

It all started about a half a year ago when the “class of 5752” began turning 50, Monroe NJ Shliach, Eliezer Zaklikovsky had a modest idea to try and get a group of classmates to spend a Shabbos at the Ohel to mark their special birthday. While discussing it with his childhood friend Florida businessman Uri Laber, Uri materialized the idea and gave his full backing, challenging him to make it happen.

Knowing the importance that the Rebbe placed on Kinusim, Farbrengens, alumni gatherings and reunions, it was sure to have the Rebbe’s blessings for overwhelming success, so long as the appropriate ‘Kelim’ and efforts were made.

As soon as the classmates heard about it, there was excitement, but not on a serious level. This is a class of close to 100 men, and a Shabbos like this seemed like a virtual dream and logistical nightmare to accomplish, with people scattered on every continent, some who really have not been in close contact with each other for the last 30 years.

A class committee was formed to help coordinate the details and pull it off, with the greatest turnout and success possible. The committee toiled for weeks and months so that no classmate and no detail would be left out, with the goal of ensuring that the 50th birthday reunion would be a most memorable one.

With 5 comfortably furnished homes rented near the Ohel, there was ample room for classmates to have their personal space to check into and rest in between a loaded 36 hours of nonstop inspiration, as the meals and Farbrengens took place in one location, and the Shiurim at another, while the Davening held near the Ohel.

Greeting each classmate in their room was a bag containing a special Teshura – a collection of Rebbe’s Sichos on 50, in both Hebrew and English, a ‘Kovetz Limud’ with the Sichos to be learned over Shabbos, Dvar Malchus, Chayenu, some mementos and nosh.

The emotion on the faces of people meeting after years and sometimes decades, in the sacred place near the Ohel was indescribable, warm embraces of Sholom Aleichem, all in spirit of love and Achdus already were signs of the special Shabbos that would follow.

The program quickly got started after everyone checked in to their respective homes, went to Mikvah and wrote their personal Pan, with a Shiur by Shaya Deitsch on the importance of davening by the Rebbe’s Ohel, followed by reflections on the vital moment of coming back to what brought us together as a class, learning in NY, which was the presence of the Rebbe, and now revisiting the Rebbe in unison, by Chaim Schapiro.

After everyone signed the carefully worded Pan Kloli, all entered the Ohel, and after a stirring Nigun of Tzamah Lecha Nafshi, the Pan Kloli was read by Chonchy Marasow. Needless to say the electricity was palpable.

After the Ohel, in a sure to be (one of many) unforgettable moment of this reunion, classmates walked over to their beloved classmate, Leibel Kahn a”h, buried not far from the Ohel, who was tragically killed in a car accident while on a camp trip some 35 years ago at the age of 14.

Leibel a”h’s friend Itche Gross said Tehillim, Chanan Feldman said Kaddish, and Shmuley Stern shared words of reflection and memories of Leibel with the class, not before the class spontaneously began to sing the special song “Our Holy Torah we hold so dear . . Leibel Leibel this was you” written in camp after his tragic passing, as the emotions were overwhelming.

From there we went to the front of “Ohel Chabad” for a class picture, something that hit home the magnitude of the reunion, as so many made the decision to reconnect for this special Shabbos.

Then came the first (of many) Lechaims, where a lavish spread of “to’ameha” was served for those who traveled from all over the world, 7 countries and 11 states to be exact, to quench their hunger and share a Lechaim after an already extremely meaningful few hours.

Mincha was followed by a few different Shiurim in various locations on a Sicha from the Parsha. Many felt like we were sitting back in the Zal learning together with our classmates in Yeshiva 30 years ago. Shiurim were given by classmates Alex Heppenheimer, Levi Osdoba and YY Jacobson.

All gathered around a square of 18 long tables. It was a message that this is one class celebrating together as one all around one massive table with no beginning or end.

MC Hirshy Minkowicz set the tone beautifully before Kiddush on the nature of this Farbrengen, where we all leave behind our communities, our personal ‘Pekel’, and share our hearts openly and without judgment, where we are on first name basis despite our respective titles and leadership rolls, where we know who we are beyond the facade, and we get ‘pickled’ beruchniyus (and begashmiyus!). He stressed the vital importance of classmates during both personal tragedy and Simchos, knowing they will always be there for you.

An incredible moment was a spontaneous dance of the famous Nigun Simcha, one of the Rebbe’s favorites, that brought all to their feet and embracing in a huge circle of Achdus and emotion, which brought us all back to 770, dancing in the Rebbe’s presence 30 years ago, and reliving that inspiration now.

After the formal meal came the continued Farbrengen, which began with Divrei Hisorerus from Efraim Zaltzman, Moshe Chein, Yitzi Lowenthal and Rafi Rosenberg.

While a lavish sweet table was set up on a different floor, it was evident that the priority was to Farbreng together, that for so many was literally oxygen for their souls, and the time didn’t matter, and before you knew it was 3:00 AM!

After a scrumptious breakfast, which in and of itself was a mini Farbrengen, came Mikvah and Shiurim in Chasidus, given by Leizer Gurkov and YY Jacobson.

Shacharis at the Ohel took place with several Minyanim, as classmates Effy Stiegman and Mendy Spalter commemorated Yartzeits for their respective father and mother A”H, and also dedicated the Shabbos Kiddush in their loving memory.

The Seudah brought a whole new depth of Farbrengen, after learning Chassidus and Davening.

MC was Yossi Swerdlov, who skillfully introduced the speakers, Uri Laber, Moshe Rapoport, Eliezer Zaklikovsky and YY Jacobson. Many emotional moments were experienced, as the speakers spoke of paying up our debt to the Rebbe for all he worked so hard to give each one of us, saying special Lechaim’s for classmates in need of personal Brochos and Yeshuos, asking the classmates to transport themselves back to the ‘good days’ of being by the Rebbe 30 years ago, the importance of carrying that torch forward to the next generation, and the vital need to see ourselves as the “Kalla Noeh Vachasudah” (‘beautiful kind bride’), both for ourselves, to maximize our potential, as well as to truly be there for another without judgment or ego.

A dramatic moment was when Eliezer Zaklikovsky announced that in honor of 11 Nissan 120 years, a fund will be established to help classmates, with a few substantial pledges made bl”n earlier during Krias Hatorah by the Ohel, by 2 classmates, to be continued BE”H by others.

Before you could stop to take a breath, it was already time for Mincha. Back to the Ohel. After Mincha was a beautiful Hartzige Seder Nigunim, led by Chaim Schapiro and a Maamer of the Rebbe (said on his 50th birthday in 5712), repeated by Avremel Keller.

Then came Maariv and a festive Havdala led by Mendy Spalter, followed by a spontaneous dance of Od Yishama, as Moshe Chein celebrated the Ufruf for his future son-in-law, and headed to the airport to return home to Toulouse, France for the wedding.

The Melave Malka was the finale that brought completion to the reunion. It also gave the opportunity for classmates not able to attend for Shabbos to come join in person, and for those out of town and from overseas who couldn’t participate to join via zoom.

MC Yossi Kaplan introduced the weekly living Torah video of the Rebbe (that Behashgacha Pratis featured classmate Chony Marasow) and spoke of the ease with which we can take a few moments each week to view it and see the positive impact on your life.

Asher Jacobson gave the words “Ubadchi Rabanan” new meaning as he journeyed through the Yeshiva years with much laughter and relived defining moments in our childhood, from teachers, Mashpiim (most notable Reb Elye Chaim Roitblat, and Reb Pinye Korf, who we just recently lost), and encounters with friends, that left lasting impacts for the decades to come and only properly internalizing them now when we reach “Ben Chamishim L’etzah”.

Some classmates shared personal anecdotes and memories, some funny, some serious, all that left life-long impacts on their lives post Yeshiva.

The program ended with a musical rendition by Efraim Zaltzman on his violin, and Sholom Wilhelm summarizing the Hachlotos and resolutions that were made, to bring a tangible outcome and continuation to this special reunion.

As classmates got up and began to disperse to make their travel back home with their printed sweater mementos in hand, a dance of “tiere brider” erupted, which brought an end to such a hard-to-describe reunion, that will BE”H be only the beginning – of many more class simchos, and what is sure to become a trend by other classes, and very soon the ultimate simcha b’korov mamosh!