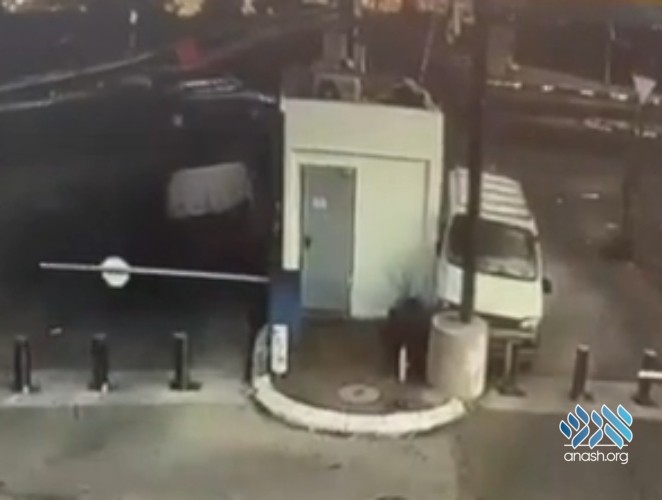 A 20-year-old IDF officer was seriously wounded Wednesday morning in a car-ramming attack just outside of Modi’in.

An IDF officer was injured in a terrorist ramming attack just outside of Modi’in Wednesday morning.

The incident occurred on Route 443, one of the two major traffic arteries connecting Jerusalem and the coastal plain, when vehicle rammed into a 20-year-old IDF officer near the Maccabim checkpoint outside of Modi’in.

After ramming the victim with a van, the terrorist exited the vehicle and attempted to hack the soldier with an axe, before being shot and killed by the injured IDF officer.

The victim is listed in serious condition, with injuries to his lower body.

An IDF spokesperson confirmed the attack in a statement.

“Following the initial report regarding a ramming attack at the Maccabim Checkpoint, an assailant arrived at the checkpoint a short while ago and ran over an IDF officer. The assailant exited his vehicle in order to attack the officer with an axe, who fired at the assailant and neutralized him. The officer was severely injured and was evacuated to a hospital for further medical treatment. The family of the officer has been notified.”

United Hatzalah and MDA emergency first responders treated the injured soldier at the scene before evacuating him to Shaare Zedek Medical Center in Jerusalem.

“A report was received at 08.34 at the MDA Emergency 101 Call Center in the Jerusalem Region of a car-ramming near Beit Horon,” an MDA spokesperson said.

“MDA EMTs and Paramedics are treating and conveying a 20-year-old male with limb injuries in serious condition to Shaare Tzedek Hospital.”

MDA Paramedics Ishai Rauchberger and Shira Malka said: “The victim was fully conscious with injuries to his limbs. We provided medical treatment that included stopping the bleed, immobilization of the injuries and pain relief, and rapidly conveyed him to hospital with continuous treatment.”

United Hatzalah volunteer EMT Shimon Ozen, who was one of the first responders at the scene, said: “Together with other medical personnel at the scene, I treated one person who sustained serious injuries to their limbs and was in serious condition when they were transported. The injured person was transported to Shaare Zedek Medical Center for treatment.”