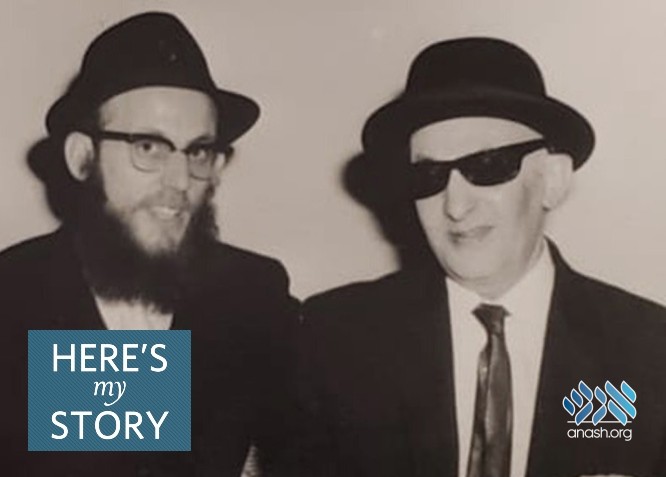 Rabbi Yosef Avraham Kagan was in a car accident, which caused him to lose his eyesight. Doctors warned him not to travel to his son’s wedding. The Rebbe did not agree and gave him a very special blessing.

Rabbi Moshe Kagan has worked in the field of kosher supervision and the production of kosher foods for most of his life. Presently he is retired and residing in Jerusalem. He was interviewed in December of 2018.

Half a dozen years before the Previous Rebbe was exiled from Russia for the crime of teaching Torah, he had already established a yeshivah in Warsaw — Tomchei Temimim. As a young unmarried man, my father — Rabbi Yosef Avraham — studied there, and in 1933, he was appointed the yeshivah’s secretary. And when the Previous Rebbe moved from Riga, Latvia to Warsaw, my father became a frequent visitor in his home.

I recall him telling me when I was a boy that, even before the outbreak of World War Two, the Previous Rebbe foresaw that dark times were coming. Not long after Adolf Hitler became the chancellor of Germany, he asked my father to raise money for a rescue effort. He’d said to my father, “There’s a great problem approaching the Jewish community. But it has been decreed from Heaven that I not be able to speak about it.” In fact, after his tortures in Soviet prisons, the Rebbe had difficulty speaking clearly, and sometimes my father had to interpret his speech to others.

Another thing — a small thing — that I recall my father telling me was advice from the Previous Rebbe to always keep his things neat and tidy — to always make his bed and straighten his room before going out in the morning. This made an impression on me, and I took it upon myself from the age of eleven to do likewise; I have kept up this habit for most of my life.

The Previous Rebbe also told my father that if he should ever rent any place – an apartment, a hotel room, whatever – he should return it to the owner cleaner than he found it, especially if the owner is a non-Jew. My father took this advice very much to heart, and was very fussy whenever we traveled together. I used to say to him, “What are you cleaning for? We didn’t make it dirty — it was already that way!” But he cleaned the place as if he was cleaning for Pesach. “This is what the Rebbe told me to do,” he would say.

Just before the start of World War Two, my father came to England to marry my mother and, at that point, the Previous Rebbe appointed him as his emissary to London. From there, my father was able to send packages of food and other supplies to Lubavitch communities in Poland and Russia to sustain them through those hard times.

I myself was born, raised and educated in England, and it was not until 1962, when I was twenty-three, that I came to New York with my younger brother, Yitzchok Meir. For both of us it seemed that life had just begun. We came from the very cold atmosphere of the English school system into the very warm atmosphere of the Chabad yeshiva an atmosphere that chasidim are famous for creating. It was a very different climate, which couldn’t even be compared with the one I had left.

First and foremost, it was exciting. The Previous Rebbe had passed away a dozen years before and the Rebbe was now leading the Chabad Movement toward new frontiers —outreach was in full swing. I immediately got involved in the Rebbe’s projects and became very much in demand because I was one of a few students who had a driver’s license. Because of that, I got to travel up and down the East Coast doing outreach work and I was very happy.

Meanwhile, back in London, my father was in a terrible car accident in which the windshield of his car shattered. When that happened — in the spring of 1965 — some glass shards entered his eye and he lost his sight in that eye, but also the focus in the other eye was disturbed. So he was rendered almost blind.

He underwent several operations at the famous Moorfields Eye Hospital, but they did not help much. He had to wear these gigantic black glasses and be led around like a blind person.

At around that time, Yitzchok Meir had gotten engaged, with the wedding planned for late summer in Montreal. As the date of the wedding drew near, my father underwent yet another serious operation, and the doctors informed him that there was simply no way he would recover in time to travel to Montreal for the wedding, which was only a few weeks later. They told him that even a younger man in top physical shape would not recover so quickly, certainly not someone of his age and state of health.

Yitzchok Meir asked the Rebbe if the wedding should be postponed until my father could attend or if it should take place as planned without our father. The Rebbe answered him, “Do not postpone. He will come, he will see, and he will dance at the wedding.”

Yitzchok Meir immediately tried to communicate this to my father, but when he called, my father was not at home — he was again in the hospital. He wanted my father to receive the message right away so he asked Rabbi Nachman Sudak to deliver it in person. When my father heard, “The Rebbe said that you will go to the wedding,” he immediately told my mother, “Buy two tickets for us.”

It just so happened that an important rabbi, Rabbi Refoel Yitzchok Wasserman, who was not a chasid, was visiting my father at the time, and he objected: “The Rebbe is far away, and your doctors are telling you not to go! How can he take such a risk?” He was sure this whole episode would end in a heartrending disappointment. But he just didn’t understand the relationship a chasid has with his Rebbe.

Of course, my father came to the wedding, even though my mother was very concerned that this might be the wrong thing for him to do. On the flight there, he still couldn’t see. But during the car ride to the wedding hall, his eyes started itching him. So he took off his big black glasses, rubbed his eyes and suddenly, looking through the car window, realized that he could see!

When he arrived, everything took place just as the Rebbe foretold. He was able to come, to see and to dance. It was a wonder!