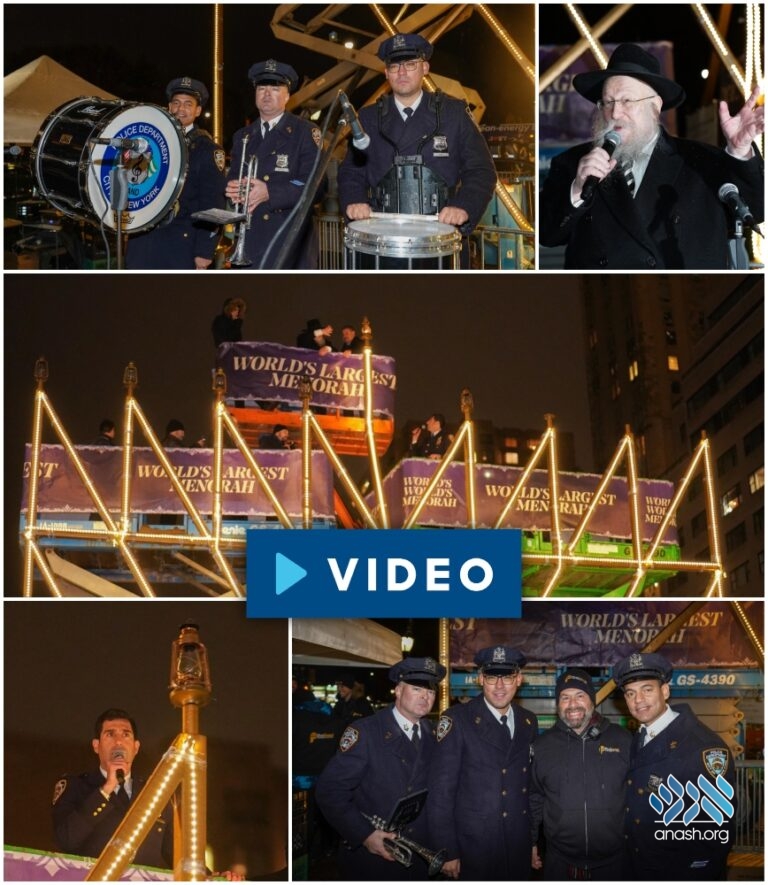 “New York’s Finest” were honored at the lighting of the fifth Chanukah candle on the World’s Largest Menorah, with Inspector Richie Taylor and others lighting a candle and the the NYPD band playing Chanukah songs.

The World’s Largest Menorah was kindled Thursday, the fifth night of Chanukah in a “Salute to New York’s Finest,” honoring the brave men and women of the NYPD at a time when they have been increasingly active in confronting antisemitism and acts of hatred throughout the city.

First Deputy Police Commissioner Edward Caban lighted the “shamosh” (the middle candle). Inspector Richie Taylor made the traditional blessings and lit the fifth candle. Joel Eisdorfer, senior advisor to Mayor Eric Adams was honored to light one of the candles of the World’s Largest Menorah on this special Chanukah evening.

“The fifth night, when the majority of candles are lit on the menorah for the first time, symbolizes the triumph of light over darkness,” said Rabbi Shmuel Butman, director of Lubavitch Youth Organization, which organized the event. “How apropos that on this night, we honor the brave men and women who are at the forefront of combating darkness in our city and protecting the liberties that we so cherish.”

“Commissioner Caban has focused on fighting the scourge of antisemitic violence in New York City. He’s walked the beat with me and community volunteers and leaders in Brooklyn and is a committed friend to the Jewish community and, really, all communities of New York,” said Taylor.

Inspector Taylor is the highest-ranking yarmulke-wearing officer in the NYPD. “The mayor, himself a former NYPD captain, understands well and is grateful for the sacrifices police officers make every day to keep the city and all of us safe,” said Joel Eisdorfer. “Chanukah teaches that each of us can make a positive difference, which is what New York City police officers do every day. What better time to honor them.”

The crowd of thousands greatly enjoyed a special treat when the NYPD Band played  Chanukah songs. “To come to New York to witness the lighting of the World’s Largest Menorah and to hear the New York City Police Band play Chanukah songs is a privilege beyond words,” said an excited visitor from France.