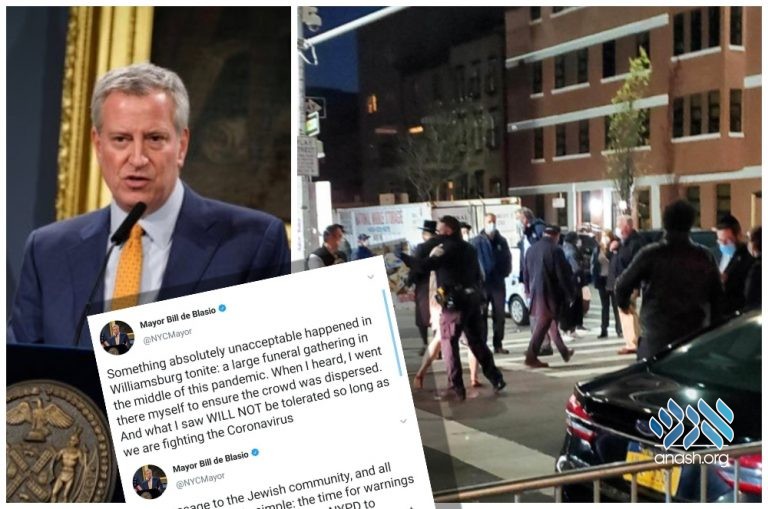 Mayor Bill de-Blasio is facing heavy criticism after he tweeted a scathing message to the Jewish community, following the breakup of a large Williamsburg levaya.

Mayor Bill-de-Blasio lashed out against the Jewish community in a shocking tweet on Tuesday, following his personal participation in the breakup of a crowd attending the levaya of Rabbi Chaim Mertz of Williamsburg.

“Something totally unacceptable happened in Williamsburg tonight,” the Mayor tweeted. “A large funeral gathering in the middle of this pandemic… My message to the Jewish community and all communities is this simple: the time for warnings has passed.”

Councilman Chaim Deutsch challenged de-Blasio on his scathing statements. “This has to be a joke,” he tweeted. “Did the Mayor of NYC really just single out one specific ethnic community (a community that has been the target of increasing hate crimes in HIS city) as being non-compliant?? Has he been to a park lately?”

“Obviously everyone should be social distancing and being extremely careful – and almost everyone has been!” Deutsch continued. “But singling out one community is ridiculous.”

Whilst the crowd’s gathering for the funeral was indeed wrong, “To speak to an entire ethnic group as though we are all flagrantly violating precautions is offensive, it’s stereotyping, and it’s inviting antisemitism. I’m truly stunned.”

The Mayor’s offensive message is being retweeted accompanied by pictures of crowds gathered the very same day to watch the US Airforce flyover above the city, utterly disregarding instructions to maintain social distancing guidelines during the event.

No NYPD over there.

In response to the Mayor’s remarks, Texas Senator and former presidential candidate Ted Cruz posed a compelling question: “Would De-Blasio have sent this identical tweet with the word “Jewish” replaced by any other religious minority? If not, why not? Laws should be enforced neutrally without targeting religious faith.”

The mayor’s own social distancing guidelines couldn’t stop him and his wife from driving to Brooklyn to take a stroll through Prospect Park over the weekend. When challenged about this, DeBlasio just waved his hand dismissively saying, ‘Come on guys, give it a break’.

When asked what he thought about the Mayor’s tweet, one member of Brooklyn’s Jewish community told Anash.org “The Mayor spoke about locking down the entire city before he was willing to shut down the schools. He took to TV to discuss suspending private ownership of means-of-production before he suspended alternate side parking. He halted closing down the gyms until he could get in one last workout. He has no credibility on anything.”

Last December, following a string of antisemitic attacks in NYC, the mayor made an appearance by 770 to get important photo-ops and decry antisemitism. However, his immediate next stop was to have lunch with noted antisemites Al Sharpton and Jesse Jackson, displaying how superficial his concern really is.

Perhaps a factor contributing to the mayor’s singling out the Jewish community is his fundamental lack of understanding of the nature of antisemitism. During a press conference last June, while responding to a question regarding an increase in anti-Semitic attacks during his mayorship, the mayor responded: “I think the ideological movement that in antisemitic, is the right-wing movement.”