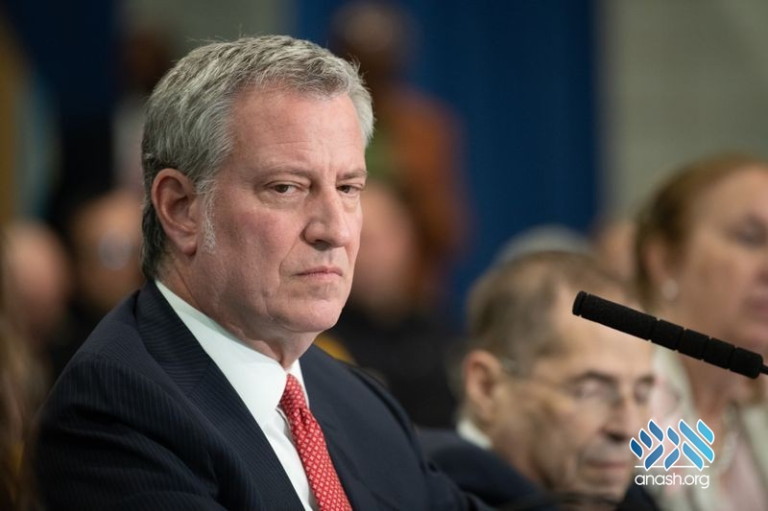 He said it a Brooklyn press conference on Tuesday. Mayor Bill de Blasio, in addressing the increase in hate crimes in New York City under his watch, said, “I think the ideological movement that is anti-Semitic is the right-wing movement.”

DeBlasio made the outrageous comments at a Brooklyn press conference on Tuesday.

Anti-semitic incidents in 2019 are up 90 percent more than they were in June of 2018. A reporter had stated that there is also anti-Semitism “on the left – in the BDS movement around the world.”

But the Mayor disagreed. He continued, “I want to be very, very clear, the violent threat, the threat that is ideological is very much from the right.”

Mayor de Blasio further added that the perpetrators of the anti-Semitic acts trace their history back to Nazism and fascism.

Former New York State Assemblyman Dov Hikind responded to the mayor’s remarks in an interview with YWN, “This is a theme song among progressive liberals of America, of which de Blasio is just one of. It is like being blind, deaf, and dumb – all at the same time. Where are they living? Are they living on the moon?”

Staten Island’s city councilman, Joe Borelli told the New York Post, “A simple look at where anti-Semitic hate crimes have occurred just disproves this– unless you count central Brooklyn as the home of a vast right-wing conspiracy.”

An op-ed by David Marcus in the Federalist went even further.  Marcus writes, “But it’s far worse than simply being stupid; in fact, it’s incredibly dangerous. As the Orthodox Jewish community is terrorized by violent attacks, the mayor simply refuses to even acknowledge the problem exists. He is giving tacit approval to those who attack Jews by foolishly pretending that anti-Semitism is only to be found among conservatives.”

Marcus further asks, “How can Orthodox Jews in Brooklyn trust that their mayor is working to solve this problem when he won’t even admit it is a problem?”