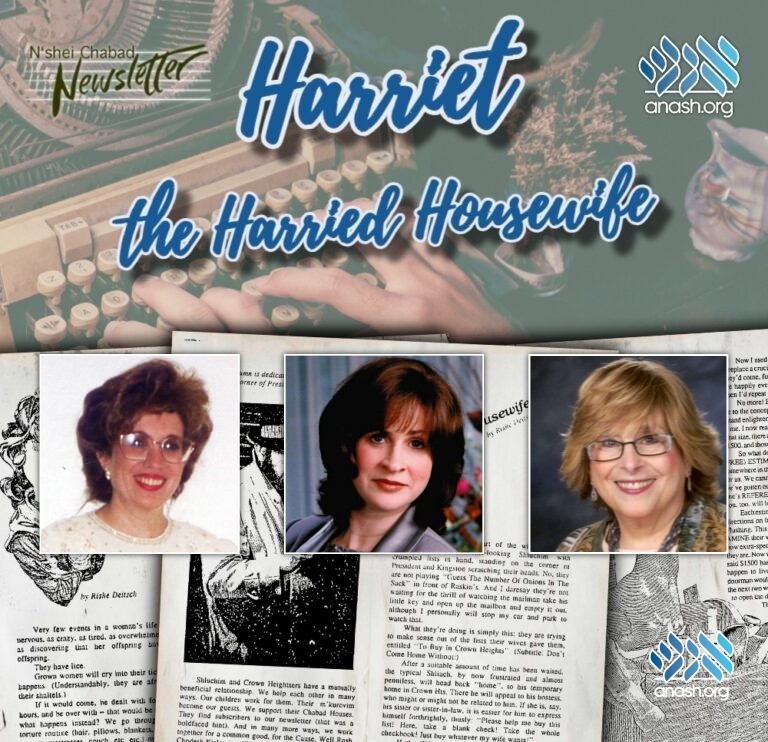 A new collaboration between N’shei Chabad Newsletter and Anash.org will be bringing the magazine’s nostalgic ‘Harriet the Harried Housewife’ columns back to life on the pages of the site. Mrs. Rishe Deitsch tells the stories behind the column, and how the new partnership came to be.

I began writing “Harriet the Harried Housewife” columns for the N’shei Chabad Newsletter in the summer of 1980. It was the brainchild of Rivki Geisinsky, then (and for the next 30 years) editor-in-chief of the N’shei Chabad Newsletter. I was 20 years old and the mother of one baby. Rivki was a few years older and had a bunch of kids already, so by asking her for ideas and just hanging out at her house, I had material for a harried housewife column before I actually became one (which happened soon enough).

Fast-forward 40 years, and Anash.org began publishing “N’shei Oldies,” nostalgic selections from older NCNs. After a few months of doing that, we met with Motti Wilhelm, editor of Anash.org, to see how we could further collaborate to benefit both the site and the magazine.

At the meeting, the idea of publishing the old Harriets came up, but I told him that it didn’t make sense to publish them, for several reasons. (a) The articles were written in a different era, before computers, before cordless phones, way before internet; young people won’t understand them. For example, in one Harriet column I write that I couldn’t make it through the day without twisties. When I wrote that, Ziplocs weren’t invented yet. And I talk about squeezing into a succah the size of a phone booth. How many people under age 30 have ever seen one of those?

(b) The articles were written when I was young and naïve (a gentle way to say dumb) and so when I read them now I feel myself turning bright red; some of them are just silly.

(c) The technicalities of it are daunting; someone has to take the actual articles and get them typed (including finding or figuring out the missing words) so I can edit them just a little, because I’m a better editor now and also because of (b).

Motti replied that his staff would take care of (c) completely. He also said that (a) is not a problem, we can just explain that these were written in the 1980s and early 90s. As for (b), he couldn’t help me with that, but we realized that if there was anything crushingly embarrassing there, I could just edit it out. (Why did I keep referring to my readers as Loyal Readers or Esteemed Readers? Things like that.)

And so we went forward, slowly and (in my case) gingerly, but surely.

Reading the old Harriets was a trip. The younger Rishe made casual jokes about women taking drugs during labor. I hadn’t yet thought about the pros and cons of putting newborns in daycare, and I was all in favor of giving lollies to toddlers. In one column I state unequivocally that pizza, and pasta with ketchup, are fine suppers. I thought soup came from cans. My youthful ignorance is permanently documented in these columns.

I made lots of jokes about my husband although, strange as this may sound, I never once checked those articles with him beforehand. I just wrote them in a notebook, longhand, and brought them to Rivki’s house. When my husband would go to 770, his friends would tell him what they had read about him. I once wrote a Harriet about men in general called “Where’s My Gartel?” Our friend Rabbi Reuven (“Richie”) Witkes promised to write one called “Where’s My Pocketbook?” but he never did. Any time you’re ready, Richie.

I also wrote about my kids a lot. At the time, some of them loved it, some of them complained about jt, and some couldn’t talk yet. Since they are now all grown up and in their 30s and 40s, this time I will ask their permission before publishing anything with their names.

All the Harriet columns were laid out by the most awesome graphic artist ever, Hensha Gansbourg, who put thought and creativity into each one, and who tolerated my corrections past the point of sanity. Thank you, Hensha.

In the mid-1980s, the N’shei Chabad Newsletter bought me a word processor, so then I began bringing Rivki disks containing the articles. It wasn’t until the mid-1990s that Rivki told me, “Rishe, you are the LAST person on staff to not have a computer. You’re really out of the loop. We’re buying you a computer, and it’s arriving tomorrow, so get a desk ready.”

And the computer arrived, and Rivki came over and put the wires where they had to go, and then she taught me how to email, and how to create and save and edit documents. That was the end of me calling people to read them their edited articles over the phone, and it was the end of faxing.

After a few years of writing this column, I hit my stride, and with Rivki’s help, I figured out what Harriet’s purpose was. Her purpose was to make imperfect housewives (another word we no longer use now) feel okay about themselves. Thank you, Rivki.

In 1994, my brother-in-law Rabbi Gershon Schusterman insisted I collect all the Harriets and have them spiral-bound. That’s why we have them all now. Thank you, Gershon.

So how can you read these lighthearted anachronisms, should you want to?

Starting during Tishrei, they will appear weekly on Anash.org, or visit the nsheichabadnewsletter.com home page and click on the link to Harriet the Harried Housewife, which will take you to those articles on Anash.org.