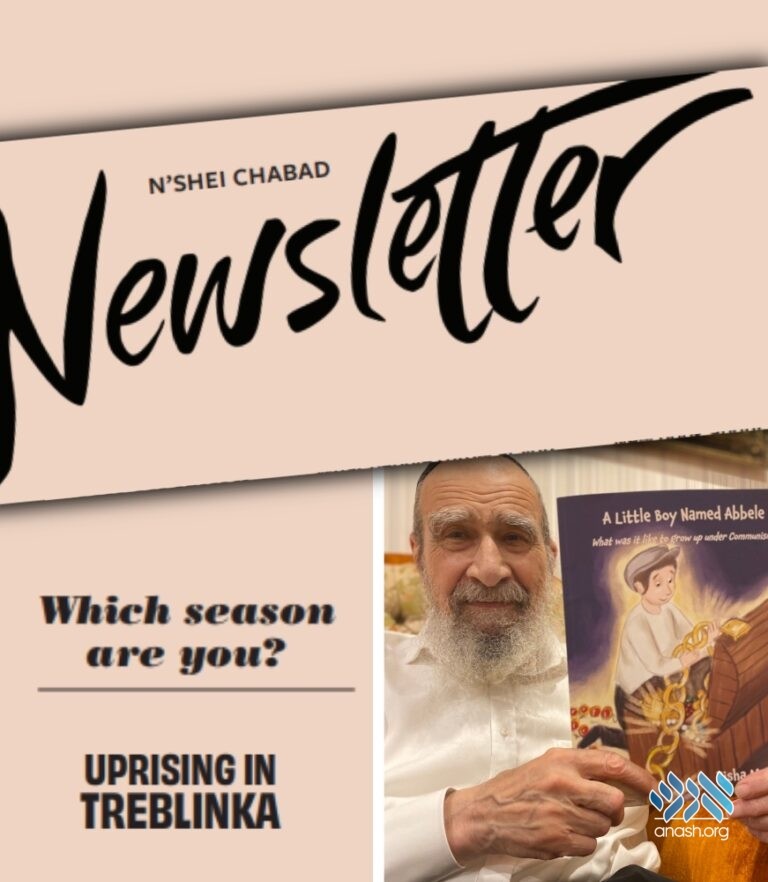 With N’shei Chabad Newsleter’s packed Chanukah issue going to print soon, they could help but show off and give a sneak peek of some of the articles you can expect to find inside.

The Chanukah issue is going to print soon, and we can’t help ourselves: We’re showing off.

We spoke with Rabbi Abba Paltiel about the new book, A Little Boy Named Abbele: What Was it Like to Grow Up Under Communism?

We were given an original story written by Holocaust survivor Samuel Goldstein. It contains the first-person account of when the Jewish inmates staged a successful uprising in Treblinka.

“Word of the planned uprising was quietly spread among all inmates, and a date was set (July 28). Weapons were distributed to the Jews in Treblinka. Everyone knew where the ammunition was being stored in their area and used this knowledge to help prepare for the uprising. For example, the one who would clean the commandant’s bathroom knew where the hand grenades were stored; he made a duplicate key and managed whenever possible to remove a few hand grenades. In this way, 83 hand grenades were assembled and buried in the sand. Another Jew managed machine guns. He worked as an automobile mechanic near the munitions warehouse. Forty-five machine guns were removed. Mechanics who worked with tanks were given the mission to sever the chains of the tanks before the uprising. Others were given the mission to sever the telephone lines. It was decided to kill the camp administration members first. At 3:30 p.m. on July 28, 1943, a Jew named Kurland lifted his shovel high in the air. This was the signal that revolt had begun. Like one man everyone swung into battle…”

“I have a vivid memory of my father telling me a story of a wealthy man who said, “When you do someone a favor, give them kleine shteindelach [pebbles], because eventually they will want to throw rocks at you. If you give them pebbles to use, it won’t hurt so much.” “Chanala,” my father concluded, “people end up hating those they are indebted to. It takes great humility to have hakaras hatov.” I didn’t understand it then, but years later I found myself on the receiving end of a relationship that I could not imagine ever becoming reciprocal. It was humbling. So humbling, in fact, that I avoided seeing my benefactor— needing him felt humiliating.  I had to work through my inferiority complex (at having been on the receiving end) and invoke gratitude. There is no shame in gratitude…”

Maxine Wofse (who is also on the cover) recalls her many starts and stops, her detours and her returns to the right path, from childhood through middle age, as she searches for Truth:

“I was at a Christian youth facility, for the purpose of exploring our spirituality. While there, I was walking along the beach and met a young man studying for priesthood, one of those who maintained the retreat house. I began telling him about my struggle to make a truly meaningful connection with G-d. His words to me were, “Did you ever see the movie Wizard of Oz? The character Dorothy says at the end of the movie, ‘If I ever go looking for my heart’s desire again, I won’t look any further than my own backyard.’ It’s always fun to be the star in a new environment but go back and overcome your own misgivings because G-d wants you to be a Jew.” Ironically, this was the advice I received from a man studying to be a priest. At the conclusion of the retreat, I went home. On the kitchen counter was a throw-away advertisement newspaper that I glanced at. I noticed the tiniest ad for a Jewish women’s study group taking place in Commack, Long Island, and I went to the group. That was my first connection to Chabad and to Rebbetzin Chaya Teldon…”

Chaya Rochel Zimmerman, whose writing you loved the last time we published her, has another story to tell in the upcoming Chanukah issue:

“His brutal murder roused his young wife to snatch her three young, orphaned children and leave Poland on a boat headed to America. The bitter experience of losing her husband drove her to discard her Yiddishe traditions before she disembarked from the steamship, unaware that they would be reclaimed two generations later by my husband, her grandson, who by hashgachah pratis bore the name of her murdered husband.”

We interviewed two women, Mirel Winner and Chanchi Milecki, who create color palettes. Is it really a science? How is it helpful to know which season you are? Read with an open mind.

Chanie Wolf describes how, as a child, she knew what was important to her “afternoon” teacher. Although this teacher taught secular studies, it was clear what her priorities were.

So, you see why we’re showing off! We can’t help but be very proud of this issue. Please subscribe now here or pick it up in a Crown Heights store right before Chanukah.

Happy Chanukah to you and yours!
Hardworking (But Happy) N’shei Chabad Newsletter Staff