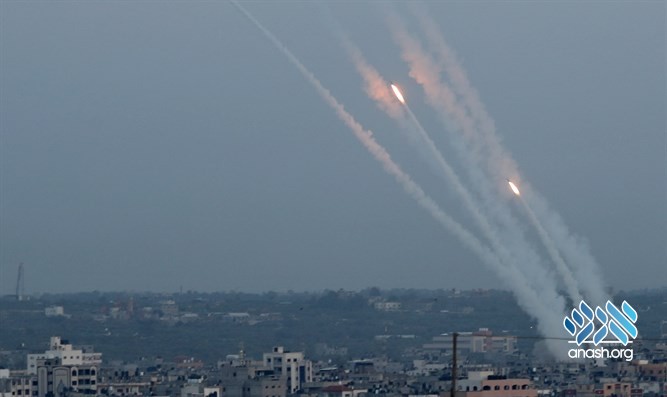 Multiple rockets were fired from the Gaza Strip at the Yerushalayim area minutes after a Hamas-issued ultimatum calling for Israel to withdraw from the Sheikh Jarrah neighborhood expired.

Multiple rockets were fired from the Gaza Strip at the Yerushalayim area and Beit Shemesh minutes after a Hamas-issued ultimatum calling for Israel to withdraw from the Sheikh Jarrah neighborhood expired.

One rocket struck a house in the Yerushalayim suburb of Mevasseret Zion, causing damage but no injuries.

One of the rockets was intercepted by Israeli air defenses, the military says. The rest apparently landed in open areas. No injuries were reported

Police said they have begun evacuating people from the Old City of Yerushalayim. “Police forces at the Western Wall have begun to evacuate those in the area to safer locations,” the police said.

The Israeli Air Force launched retaliatory raids on targets in the Gaza Strip.

Hamas had threatened to attack Israel if Israeli security forces weren’t removed from parts of the capital by 6 p.m. The attack occurred shortly thereafter.

Hamas took responsibility for the attack, saying that it was “in response to [Israeli] crimes and aggression against the holy city and harassment of our people in Sheikh Jarrah and the Al-Aqsa Mosque, and this is a message that the enemy should understand well.”

Sirens also sounded in Sderot and nearby communities in the Sha’ar Hanegev region of southern Israel.

Islamic Jihad claimed it fired 30 rockets at Sderot, but that number was unconfirmed.

Meanwhile, an anti-tank missile fired from Gaza hit an Israeli car across the border. The car was set afire and an Israeli man was lightly hurt, according to the IDF. The man, a civilian, has been taken to a hospital for treatment.

Residents of a community in the Shaar Hanegev region were advised to go into their houses and lock the doors amid concerns that terrorists may have entered the area from the Gaza Strip.