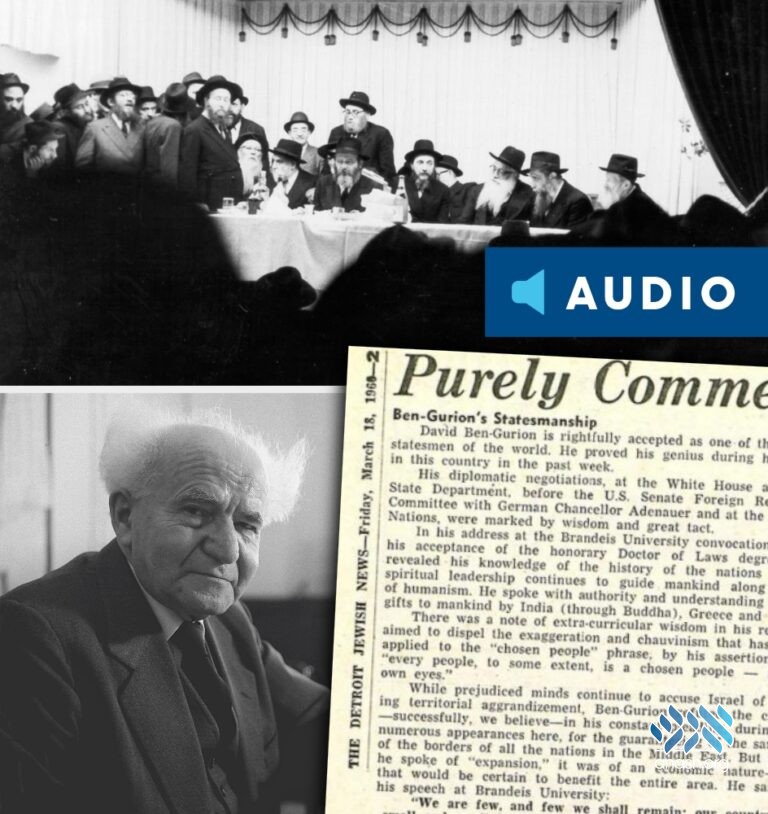 Newly restored audio of the Rebbe’s Purim farbrengen of 5720 highlights the Rebbe’s response to a speech by Prime Minister David Ben Gurion on the status of Yidden as the chosen people.

March 9, 1960 – 10 Adar, 5720. Brandeis University, Massachusetts.  Then Prime Minister of Israel David Ben Gurion delivers a speech entitled “Science and Ethics: the Contribution of Greece India and Israel.” A week later, the Detroit Jewish News reported on the content of this speech: “[Ben Gurion] aimed to dispel the exaggeration and chauvinism that has been applied to the “chosen people” phrase, by his assertion that “every people, to some extent, is a chosen people – in its own eyes.”

March 13, 1960 – Purim, 5720. Albany Manor Hall, Brooklyn.  At 8:30 PM on Purim evening, the Rebbe begins the yearly Purim Farbrengen. The Farbrengen begins with an explanation on the unique one day joy of Purim, surpassing the week-long celebration of all other holidays. Following 2 Sichos on this theme, the Rebbe shifts focus to another topic: The Jewish people are the chosen people, and trying to hide this won’t stop persecution.

Listen to the farbrengen here.

A letter written by Moshe Slonim, student in 770 at the time, sheds light on the background of the Farbrengen.

At 9:30 PM, a guest arrives: Zalman Shazar, at the time a former Knesset member and acting chairman of the Jewish Agency’s Jerusalem Executive, later serving as President of Israel. The Rebbe received Shazar warmly, giving him L’chaim and cake. Shazar then took an honorary seat behind the Rebbe.

Over the next several Sichos of the Farbrengen, the Rebbe elaborated on a story of the Tzemach Tzedek, highlighting the two “Yuds” in the title “Yehudim” in the Megillah. The two Yuds refers to the two inclinations a Jew possesses, one good and one evil. Some Jews are influenced more by their good inclination, and some unfortunately the opposite. The decree of Purim however targeted both groups, notwithstanding one’s level of observance.

In recent years, the Rebbe continued, we once again saw the persecution of all Jews, even those who tried to hide their Jewishness. The fact remains that we are chosen, and attempting to hide our Jewishness won’t stop those who seek harm from persecuting us.

Now, using 3 separately recorded versions of that night’s event, these Sichos are available in restored audio quality at JEM’s ashreinu.app, along with countless other restored Purim Farbrengens. Listen to restored audio of Purim 5720 here.

Start experiencing Purim with the Rebbe today at Ashreinu.app.  Join the restoration efforts at restore.ashreinu.app.