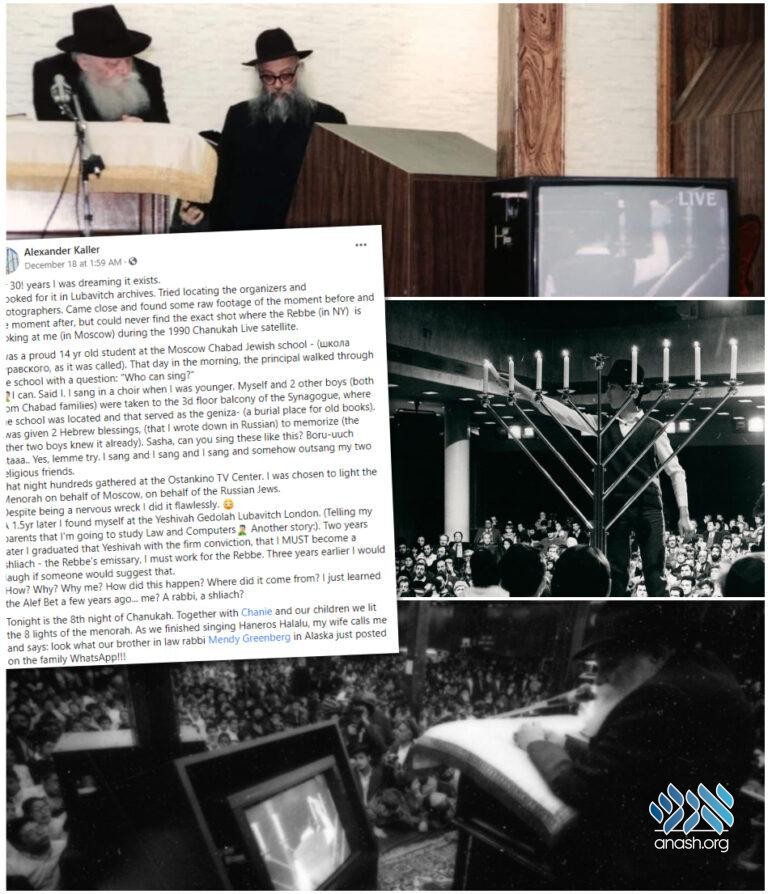 “For 30 years I was dreaming it exists.” A simple black and white photo, buried in a stunning gallery released by RebbeDrive was exactly the photo Rabbi Alexander Kaller of Florida was sure existed, but could never find.

The photo was released as part of a stunning gallery of Chanukah Live 5751, the first such event to take place. Released by RebbeDrive during Chanukah, the album contained hundreds of never before seen pictures documenting the monumental Chanukah Live event broadcast from 770 and other locations around the world.

One photo in the album showed the Rebbe looking at the screen playing a live broadcast from Moscow, as a young Alexander Kaller said the brachos and lit the menorah.

In a Facebook post, Rabbi Kaller wrote of his decades-long search for exactly this photo, and his feelings upon discovering it indeed existed.

For 30! years I was dreaming it exists.

I looked for it in Lubavitch archives. Tried locating the organizers and photographers. Came close and found some raw footage of the moment before and the moment after, but could never find the exact shot where the Rebbe (in NY) is looking at me (in Moscow) during the 1990 Chanukah Live satellite.

I was a proud 14 yr old student at the Moscow Chabad Jewish school – (школа Куравского, as it was called). That day in the morning, the principal walked through the school with a question: “Who can sing?”
I can. Said I. I sang in a choir when I was younger.

Myself and two other boys (both from Chabad families) were taken to the 3d floor balcony of Synagogue, where the school was located and that served as the geniza– (a burial place for old books). I was given 2 Hebrew blessings, (that I wrote in Russian) to memorize (the other two boys knew it already). Sasha, can you sing these like this? Boru-uuch Ataaa.. Yes, lemme try. I sang and I sang and I sang and somehow outsang my two religious friends.

That night hundreds gathered at the Ostankino TV Center. I was chosen to light the Menorah on behalf of Moscow, on behalf of the Russian Jews.
Despite being a nervous wreck I did it flawlessly.

A year and a half later, I found myself at Yeshivah Gedolah Lubavitch London. (Another story). Two years later I graduated that Yeshivah with the firm conviction, that I MUST become a shliach – the Rebbe’s emissary, I must work for the Rebbe. Three years earlier I would laugh if someone would suggest that.

How? Why? Why me? How did this happen? Where did it come from? I just learned the Alef Bet a few years ago… me? A rabbi, a shliach?

Tonight is the 8th night of Chanukah. Together with Chani and our children we lit the 8 lights of the menorah. As we finished singing Haneros Halalu, my wife calls me and says: look what our brother-in-law Rabbi Mendy Greenberg in Alaska just posted on the family WhatsApp!!!

Dec. 18, 1990. I’m lighting 8 candles of the menorah in Moscow and the Rebbe on the other side of the ocean lifts me up from the crowd of a few hundred in Ostankino and says: “You will be mine”.

I never had the privilege to receive a dollar from the Rebbe’s hand or to see the Rebbe before the stroke. But he saw me. Perhaps just for a moment. It changed my life. Forever. For that and all of my life’s blessings, I hope to repay by living up to what he would expect me to be. Every day.

Tonight is the 8th night. 30 years to the moment. I found the picture I never saw but knew in my gut it existed. Or maybe it found me. Or maybe it’s not about the picture, but about the Rebbe that never leaves his flock and continues to watch and guide us.

We miss you, Rebbe.
Happy Chanukah and Good Shabbos!