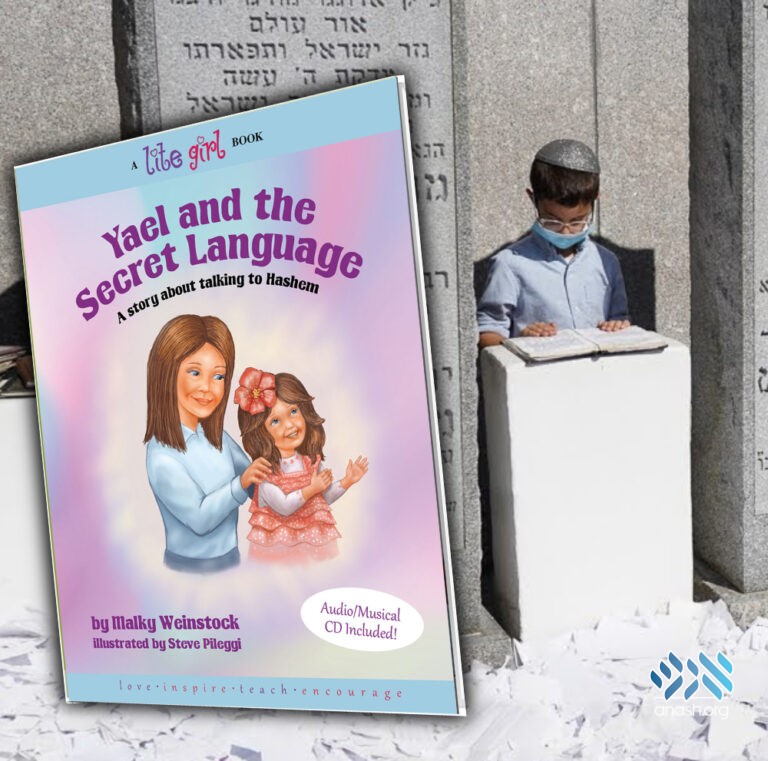 Yael and the Secret Language is a brand new release in the super popular Yael and Dovy picture book series, to empower children to develop an intimate relationship with Hashem by talking to Him constantly in their own words.

Last year, Gimmel Tamuz was a day that many could not go to the Ohel. Author and producer of the Yael and Dovy books, Malky Weinstock, was one of them, and not being able to go, in her own words, “felt she wanted so badly to do something for the Rebbe, to bring honor to the Rebbe’s teachings and messaging that day.”

In that moment, she knew what that would be- to write a new title to inspire the thousands of children around the world who love the Yael and Dovy book series. It would be the 22nd title in the series and in keeping with the mission of sharing LITE (an acronym for love, inspiration, teaching and encouragement), she sat, deep in thought, pondering which inspirational message to focus on with this new title.

In a burst of inspiration, an idea was born in her mind, and she sensed intuitively that this was the message the Rebbe would want her to convey during that very difficult time last year when Covid was still raging, schools had been closed for months and camps were uncertain if they were to open. At a time when dooms-day predictions and fear were being highlighted by the media daily, Yael and The Secret Language is the story she wrote, showing young children to talk to Hashem about every problem, wish or concern; that Hashem is there to listen to them always and will take care of them.

Yael and her brother, Dovid, observe their mother constantly whispering, and are convinced she is communicating with a secret “Somebody” using a secret language. They question her curiously and she then shares that her “secret language” is actually her constantly whispering to Hashem, asking Him for help and thanking Him, from early in the morning, when she first awakens, and asks for strength for the new day, and throughout the day with all her activities. She encourages them that they too can ask Hashem for the things that matter most in their young lives, and they get to practice doing so. Yael feels so happy to use the “Secret Language” to talk to Hashem and ask Him for help and she encourages the reader to do it too.

The newly arrived Yael and the Secret Language, conceived and written on Gimmel Tammuz, is a beautifully illustrated picture book plus read-along/sing along CD for children aged 4-8, with the most fundamental and relevant theme of young children connecting to Hashem. Every child who reads this book will be inspired and heartened by the message.