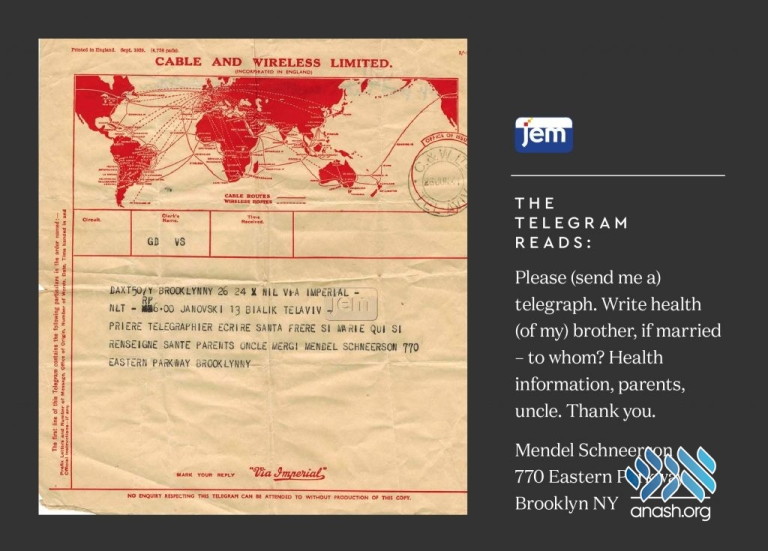 In the summer of 1941, as World War II and the Holocaust were ravaging Europe, the Rebbe and the Rebbetzin were saved from the Nazi war machine, arriving on the shores of the United States on the 28th of Sivan.

Having been largely incommunicado while stranded in southern France under the Nazi puppet government of General Petain, only a day after his arrival in the US, the Rebbe sent an urgent telegram to the Yanovsky family in Tel Aviv, inquiring to the whereabouts of his brother Reb Yisrael Aryeh Leib, his parents, Rabbi Levi Yitzchak and Rebbetzin Chana, and his uncle, Rabbi Shmuel.

The Yanovskys were first cousins of Rebbetzin Chana, and they also provided a home away from home in Eretz Yisrael for the Rebbe’s brother, Leibel.

The telegram, clearly sent by the Rebbe at the first opportunity after his arrival, is written in the shorthand style of telegrams:

Please (send me a) telegraph. Write health (of my) brother, if married – to whom?
Health information, parents, uncle.
Thank you.

In fact, Reb Yisrael Aryeh Leib was married at the time, living in Tel Aviv.

Rabbi Levi Yitzchak was in Almaty Kazakhstan, exiled there by the Soviets for his work to uphold Yiddishkeit, and Rebbetzin Chana had joined him there.

Rabbi Shmuel Schneerson, the beloved uncle with whom the Rebbe had a very close relationship and who gave the Rebbe one of his semichas (rabbinical ordination), was also in Kazakhstan, having been arrested for “anti-Soviet activities.”

The telegram reached JEM recently as a result of its years-long research project on the Rebbe’s life through the My Encounter with the Rebbe project and the Early Years book.