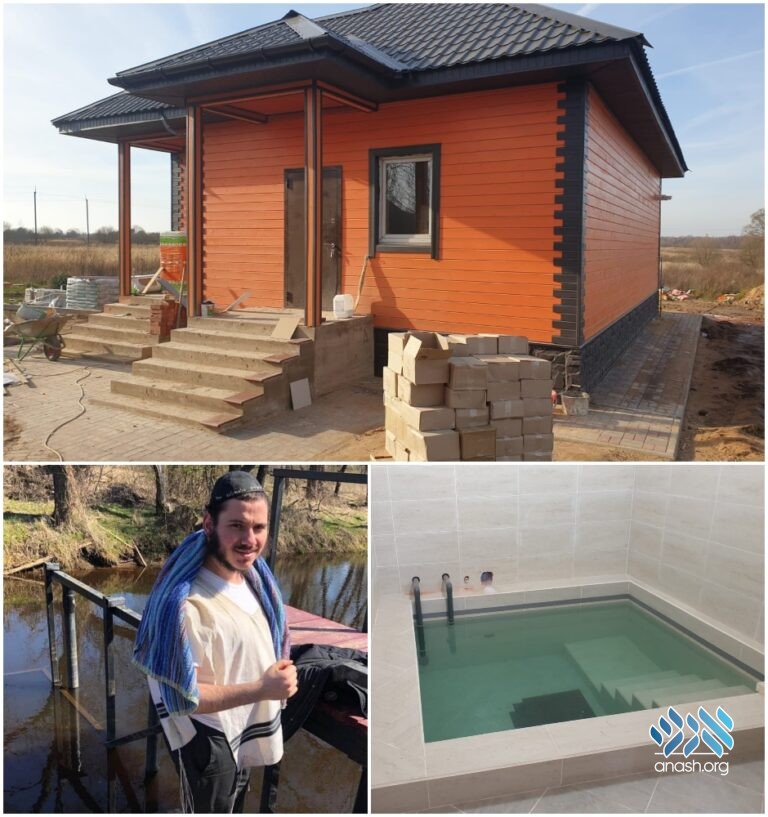 A new mikvah built in the Russian town of Lubavitch is sure to come to use with the town’s many visitors frequenting it, But the new structure does more than help visitors. It makes history in the small town that was once the headquarters of Chabad.

Visitors to the Russian town of Lubavitch will surely be delighted by the newly built mikvah, which will allow them to toivel without needing to use the nearby river. With sub-zero temperatures during many months of the year, visitors had to break the ice at times to immerse before visiting the Ohel and other holy sites. Now, that will no longer be neccesary.

But the new mikvah does more than just offer a convenient tevilah. It actually makes history in the small town which was once the headquarters of Chabad.

For many decades, ever since the Mitteler Rebbe settled in Lubavitch, the town had a mikvah built according to the specifications of the Alter Rebbe. With a river running through the town, the mikvah was built on the river by putting in a wooden box with holes, as described by Rabbi Berel Levin in his sefer Tikunei Mikvaos. In later years, the mikvah utilized a spring, but at no point was the mikvah built in a bor that did not have a direct connection to a live water source.

It was only after the Rebbe Rashab moved to Rostov, where using the river was not possible, and digging a well was impractical, that the Rebbe Rashab set out guidelines for building a mikvah bor al gabei bor, with the bottom bor filled with rainwater. Since then, all Chabad mikvaos have been built using those same guidelines.

In recent years, with the restoration of the holy sites in Lubavitch by Shliach Rabbi Gavriel Gordon, the number of visitors started increasing exponentially, and the need for a proper mikvah was acutely felt. While the river had sufficed in the years that only a few visitors came to the town, as the numbers grew, more and more visitors began inquiring about building a proper mikvah.

To fill the need, Rabbi Itche Kogan, known as “the tzadik of Leningrad”, built a house with not one, but two mikvaos, one for men, and the second a mikvah tahara, which could be used by families who were staying overnight, or groups that came for a full Shabbos. Built in close proximity to the Ohel of the Tzemach Tzedek and Rebbe Maharash, it gave visitors the chance to tovel before visiting the Ohel without having to use a mikvah in a nearby town, or to break ice and avoid mosquitoes in the river.

So, for the first time in history, the Rebbe Rashab’s mikvah was built in Lubavitch, where he was born, raised, and lived most of his life…