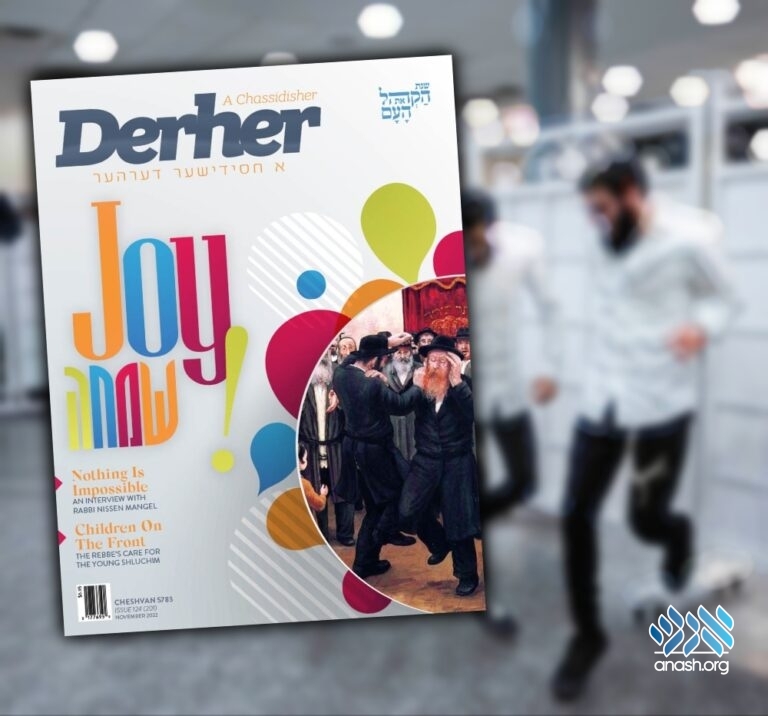 The new Derher magazine explores the profound importance and impact of simcha in our avodas Hashem and life as a whole.

The new Derher magazine explores the profound importance and impact of simcha in our avodas Hashem and life as a whole. Below is an excerpt of the introduction to the article:

To learn more about the Derher magazine or to get your own copy, click here.

Listening to a tale of Chassidim, one can sense a feeling of pure joy and happiness. Whether it’s an account of spending a Yom Tov in the presence of the Rabbeim or a story of perseverance through the most difficult of times, there is an energy present—one of ecstasy and joyfulness infused in every step of their avodas Hashem.

As it says in Tehillim Ivdu es hashem Besimcha—the avoda of a Yid is to be done with joy and enthusiasm. When we learn Torah and do mitzvos, it should be infused with energy and excitement from the incredible fortune we have in being Yidden and being able to serve Hashem.

This possuk serves as a guide not only to one’s state of mind while learning Torah and doing mitzvos, but also as a lesson on the importance of simcha throughout the life of a Yid. We are taught that every aspect of a Yid’s day—even the most mundane part—is for the higher purpose of serving Hashem. This possuk in Tehillim is therefore a mandate for us to live our lives with constant happiness.

Although simcha has always played an important role in the avoda of a Yid, with the revelation of Chassidus it took on a whole new significance. The Baal Shem Tov emphasized this idea, how every aspect of our lives should be carried out with complete joy, explaining that simcha is fundamental in every step in one’s avodas Hashem. Even when it comes to doing teshuva, one’s approach should be pure joy.

The Frierdiker Rebbe describes in a letter how there are two things that were never lacking by Chassidim: Simchas hanefesh veyedidus —Joy of the soul and friendship. These are Chassidishe characteristics that always exist… sometimes it needs to be revealed though. The way to reveal it is through learning Chassidus.” This joy plays such a pivotal role in Chassidus to the point that it is often referred to as one of the foundations of Chassidus.

In Tanya, the Alter Rebbe explains at length the importance of simcha in avodas Hashem. He describes how just the thought of being able to connect to Hashem should bring an immense excitement and joy to the person, even more than when receiving wealth and riches!

This should be the way a Yid lives when things are easy and difficult alike. Chassidus teaches us how joy shouldn’t just be an outcome of good circumstances, it should be the way we define and approach every situation. Whatever may come our way, we should take it in stride recognizing that it is coming from Hashem and it is for our ultimate good. There are countless letters and answers from the Rebbe describing how the way to approach a difficult situation is to add in simcha, and by doing so we create a כלי for all the brachos we need, bringing them about in manner of revealed good.

Keeping this frame of mind may prove difficult at times. In a lengthy letter, the Tzemach Tzedek writes to a Chossid who was struggling emotionally that in addition to asking Hashem to bring him to joy, he can be in control of his emotions and put himself in a joyful state.

thus he will bring himself true happiness and a joyful state of being.

In addition to the importance regularly given to simcha, it is especially important as a preparation to bring about the geulah. The Rebbe explains that just as simcha poretz geder—when one is joyful it enables him to break boundaries and do more in every aspect—so, too, our joy brings about the ultimate breaking of boundaries, the coming of Moshiach!