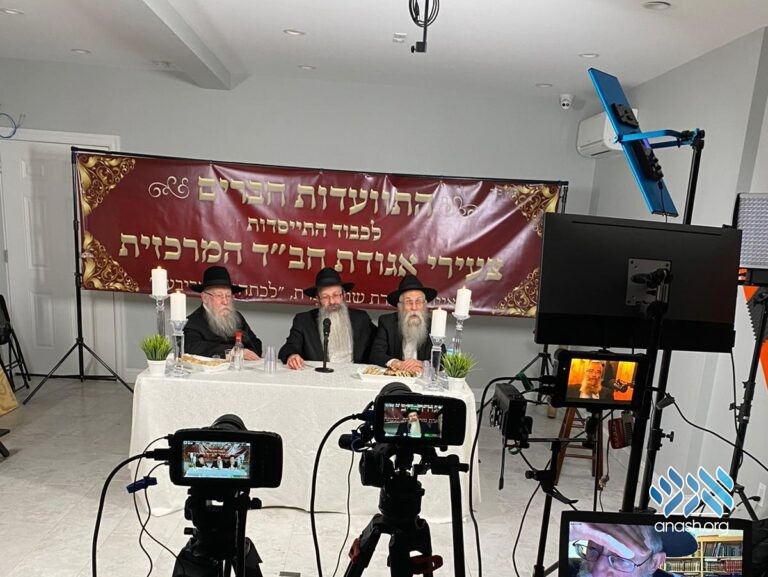 Shluchim of the New York Metropolitan area celebrated the 66th anniversary of Tzach, with an inspirational Farbrengen held over Zoom. The farbrengen was dedicated to longtime board member Rabbi Chaim Meir Lieberman a”h.

The Shluchim of the New York Metropolitan area celebrated the founding of Tzeirei Agudas Chabad Hamerkozis – Tzach, by the Rebbe, sixty-six years ago, with a great inspirational Farbrengen.

The Zoom gathering was opened by the chairman of the evening, Rabbi Aron Ginsberg, Shliach in Boro Park, who spoke about the great inspirational qualities of this day, the Birthday of the Rebbe Maharash, on the Sefirah of “Tiferes Shebetiferes” and “Le’chatchila Ariber.”

Rabbi Ginsberg asked that all Shluchim in their homes should pour themselves a glass of wine or Mashke and say “L’chaim” together in brotherhood. He then started the Niggun of the Rebbe Maharas”h to bring everyone in the right festive atmosphere.

“Reb Chaim Meyer’s dedication and devotion to every Shliach individually and to all aspects of Tzeirei Agudas Chabad is indescribable. Everyone misses him on a personal level.”

Rabbi Butman emphasized the words of the Rebbe to Rabbi Chaim Mordechai Aizik Chodakav, the head of the Rebbe’s Mazkirus in the name of the Rebbe, related to Rabbi Dovid Raskin, and, to long life, Rabbi Moshe Pesach Goldman, that the Rebbe wanted to participate in the Convention of Tzeirei Agudas Chabad (held on Chol Hamoed Sukkos) but since that is not possible, the Hemshech -continuation of the Convention would, therefore, take place that evening at the Rebbe’s Farbrengen of Simchas Beis Ha’shoeivoh. Indeed, the chairman of the annual Convention would provide a report of the event in the presence of the Rebbe during the Farbrengen.

The Chairman of Tzeirei Agudas Chabad Rabbi Moshe Pesach Goldman, La’arichus Yomim Veshonim Tovos, was the first one to deliver the report at the Rebbe’s Farbrengen. This was followed by Rabbi Yitzchok Dovid Groner, Rabbi Sholom Ber Gordon and Rabbi Tzvi Hirsch Gansburg.

Rabbi Butman concluded that this present situation of the pandemic gives additional meaning to the concept of Tiferes Shebetiferes – being in the form of Tiferes even in difficult situations. He wished all Shluchim to have great Hatzlocho in both their Shlichus and in their personal life with much nachas from their children Besimcho Ubetuv Leivov, in joy and in happiness.

Rabbi Kasriel Kastel, Program Director of Tzeirei Agudas Chabad spoke about difficulties of public programs during the pandemic. “Nevertheless, Shluchim rose to the challenge in a heroic way.” Rabbi Kastel recalled how he worked with the authorities of New York state to enable some activities for Jewish inmates last Purim.

Rabbi Kastel expressed his hope that we should be able to continue our Shlichus without any disturbances Behatzlocho Rabbo.

The Guest Speaker Rabbi Shmuel Lew, Shliach in London England spoke about the great Zechus of Shlichus. Rabbi Lew emphasized his message with many answers and Horo’os from the Rebbe.

Rabbi Lew also told many stories from the Rebbe regarding Shlichus. Rabbi Lew generously shared with “my brothers” many personal stories and details of many a private “Yechidus” that he had with the Rebbe over the years.

Rabbi Lew generated inspiration and commitment as a soldier on the front lines of Shlichus of the Rebbe for many years.

Rabbi Mendel Duchman, fundraising couch inspired the Shluchim with his straight-forward optimistic approach to fundraising “after” the pandemic.

He stressed what Hashem said to Moshe “Ma titzak eilai daber el bnei Yisroel veyisou” –“Why are you screaming to me tell the Jewish people they should keep on going forward.”

“This is our task now, my dear brothers, we have to fulfill the “Veyisou” we have to move on with optimism and confidence as we have the strength and inspiration that no one else has and we will be absolutely successful. I love you.”

The report of the Zoom organizer was heartwarming. Virtually every Shliach in the New York Metropolitan area participated.

Many Shluchim have expressed their gratitude for an evening of strength, inspiration and recharging the batteries for the great task ahead — bringing Moshiach now.