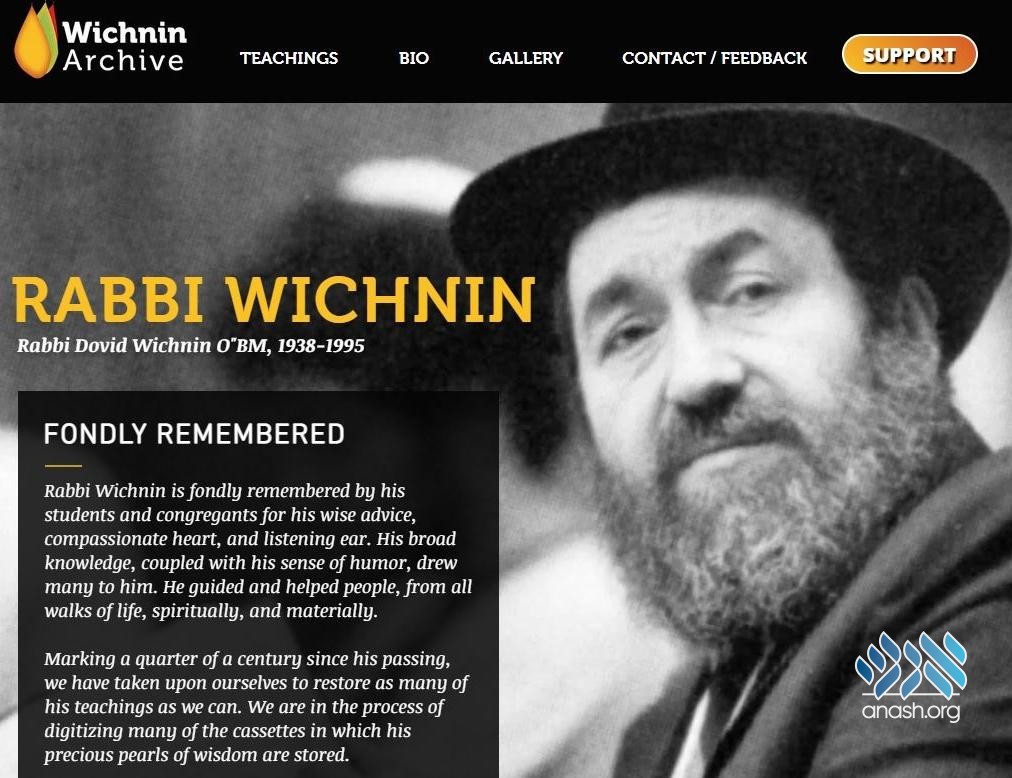 Students of Rabbi Dovid Wichnin have launched a website containing his shiurim, farbrengens a biography and photo gallery, giving his students an opportunity to relive their time studying under him, and giving thousands of others a chance to “meet” him for the first time.

Rabbi Wichnin has dedicated his life to Chinuch and in 5737 (1976) he was called upon to serve as the Rosh Yeshivah of Tiferes Bachurim in Morristown, NJ where he taught, inspired, and uplifted many hundreds of students and their families. Rabbi Wichnin was also was the Rav of Congregation Tzemach Tzedek – Lubavitch in Monsey, NY.

Rabbi Wichnin is fondly remembered by his students and congregants for his wise advice, compassionate heart, and listening ear. His broad knowledge, coupled with his sense of humor, drew many to him. He guided and helped people, from all walks of life, spiritually, and materially. In his own unique style, he made a point of connecting to everyone at their level and as a Chassid-Par-Excellence he made a lasting impression on those who met him. Decades later, he is still sorely missed by those whom he influenced.

Thank G-d, Rabbi Wichinin lived at a time in history where many of his lectures, Shiurim, Farbrengens, and so on, were recorded. After his passing, his wife Mrs. Mala Wichnin collected tapes…many tapes.

Marking a quarter of a century since his passing, his students have taken upon ourselves to restore as many of his teachings as we can. We are in the process of digitizing many of the cassettes in which his precious pearls of wisdom are stored.

After much effort, we are hereby debuting www.RabbiWichnin.com,

The website (currently – with more to come) contains 76 audio files where thousands of his Talimidim, and now, their children, and grandchildren, can enjoy for eternity.

We would like to thank Mrs. Mala Wichnin for giving permission to digitize the tapes and earnestly ask anyone who has cassettes or videos (High 8, VHS, etc.) to mail them to:

Please also consider making a tax-deductible donation to help cover the cost of this project by following this link:

Rabbi Wichinin filled many hearts with happiness, laughter, the joy of Yiddishkeit, love of Chassidus and the Rebbe, caring, and wisdom. His loss, in turn, left many many empty hearts. We hope that this effort will help fill some of those gaping holes and help us keep pushing until we reach the finish line of the Geula.