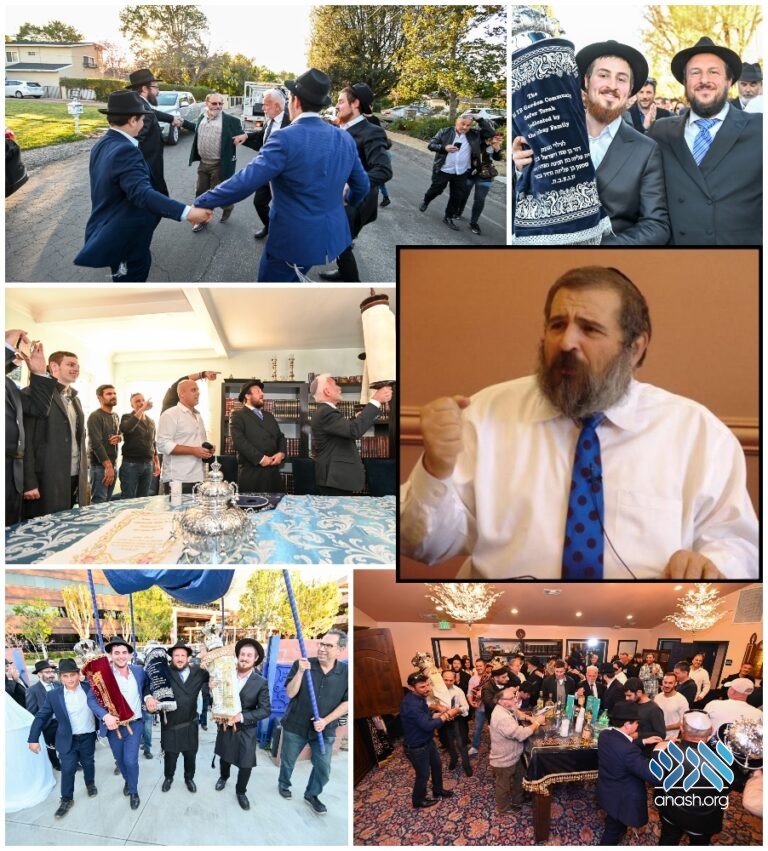 Six years after the passing of Rabbi Yehoshua B. Gordon, legendary shliach to Encino, California, a new Torah was dedicated to his son, Rabbi Yossi Gordon’s Chabad House in Woodland Hills, California.

Rabbi Yehoshua Binyomin Gordon served as the Head Shliach of the Fernando Valley for over forty years, and his shiurim on Chumash, Tanya, and Rambam are listened to by thousands of Jews daily.

Exactly a year prior, on the fifth yahrtzeit, the community had begun writing the sefer Torah. The community gathered then at the Chabad house for a beautiful event, and all in attendance had the zechus to write the opening letters together with sofer Rabbi Yosef Teitelbaum.

The Torah then continued being written, organized by Rabbi Moshe Klein from Hasofer. Throughout the year many participated by sponsoring the Seforim, Parshiyos, and special Pesukkim in the new sefer.

After much help and perseverance, the Torah was completed and ready to be celebrated in its new home. An incredible celebration was planned in order to enter the sixth yahrzeit with a new Torah and aliyas neshama.

The event began in the Shliach, Rabbi Yossi Gordon’s home. All the sponsors came to write the final letters in the Torah with their families, say l’chaim, and participate in the completion of the torah. Rabbi Y.B. Gordon’s wife and children, together with friends and family of the community flooded the house, and the excitement began to fill the crowd.

A lively procession of over 100 Jews danced with the Torah to the Chabad house. With very lively music and celebration the Torah arrived in the shul, where the pessukim of ata haraisa were said, and everybody danced hakkafos.

The Simchas Torah feeling in the air overtook everybody, and the shul was filled to capacity with Jews dancing, spilling outside of the shul.

After all the music and dancing finished, the three sons of Rabbi Y.B. Gordon had minyonim for ma’ariv and said kaddish.

Following davening everybody sat down to a lavish seudas mitzva in a beautiful tent outside. At the meal Rabbi Yossi Gordon shared a few words, and a special announcement was made. He told the community that there would be a new Shliach moving to town, an announcement which was met with much enthusiasm and excitement.

As the evening concluded everybody left inspired and in appreciation for this tremendous milestone accomplished in Woodland Hills, CA.

To help the events, programs, and growth of Chabad of Woodland Hills you can partner with us at whchabad.com/donate