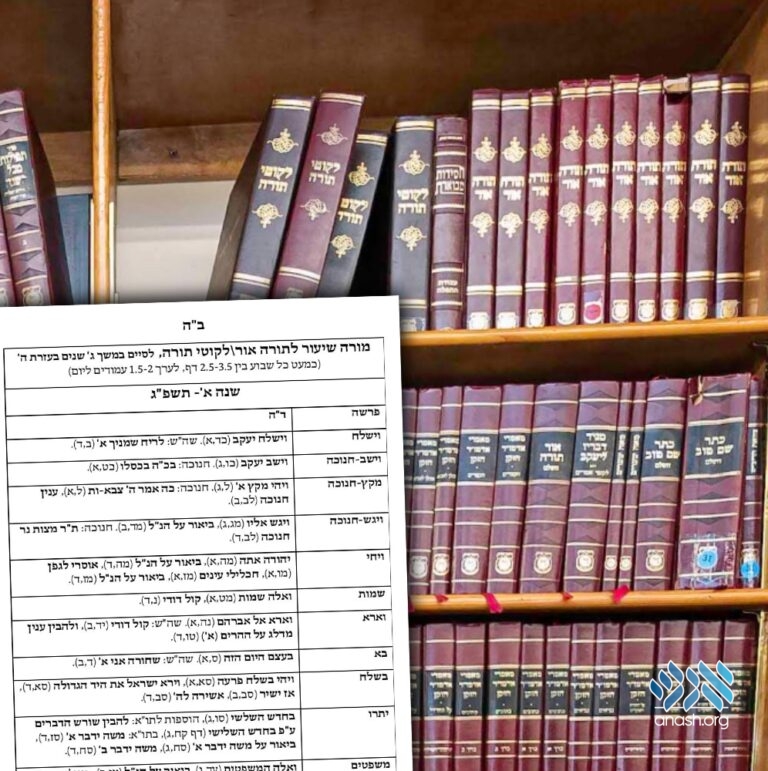 In honor of 19 Kislev, the Rosh Hashana of Chassidus, a new system to complete the study of the entire Torah Or and Likutei Torah over three years has been launched.

In honor of 19 Kislev, the Rosh Hashana of Chassidus, a new system to complete the study of the entire Torah Or and Likutei Torah over three years has been published.

This moreh shiur is arranged to learn some of the ma’amarim connected to the weekly Parsha or Yom Tov and over three years learn the entirety of Torah Ohr and Likkutei Torah.

For most people, learning the entire weekly portion of Torah Or and Likutei Torah every week and finishing all the maamarim (with Shir HaShirim) every year is very difficult. Many Parshios and Yomim Tovim have many maamarim, making it very difficult for the average person to complete everything. Usually, most people learn a few maamarim for each Parsha and Yom Tov every year, but they don’t keep track of which ones they learned and which they need to learn, and they never actually make sure to learn every single maamar of Likutei Torah.

In order to make it easier to fulfill the Rebbe’s instruction to learn every maamar of Torah Or and Likutei Torah, while learning an amount that is not too much for the average person, the new study system divided up all of the maamarim in Torah Or and Likutei Torah (including all the Hosafos, Yomim Tovim, and Shir HaShirim) to be learned over a period of three years, learning around 2.5-3.5 daf a week or less – that’s around 1.5-2 amudim a day.

This corresponds to the track of learning the entire Rambam in three years (by learning one chapter a day).

Learn Chassidus Inc has partnered with Project Likkutei Torah this year for our Yud Tes Kisleiv fundraising campaign. They will be sharing a Charidy platform, but all the funds raised by team LearnChassidus will go to Learn Chassidus Inc. for promoting new Likutei Torah translations. The campaign will be going live bezras Hashem tommorow, Monday afternoon, 18 Kisleiv (December 12th), at 4 pm central standard time, around the beginning of Yud Tes Kisleiv.

The campaign link will be Charidy.com/plt/LearnChassidus

If you would like to start a team to help support our work, please reach out to [email protected] to set that up.