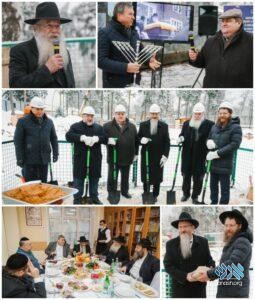 The new Jewish Community Center under construction in the Mitischi Borough of Moscow, laid a cornerstone taken from an area adjacent to the Ohel of the Rabbeim in Lubavitch.

While the bulldozers and other heavy vehicles stood silently, and a light snow covered Moscow, the cornerstone for a large and impressive building was laid in the Mitishi borough of Moscow’s suburbs. With a small crowd present, in keeping with the guidelines of Russia’s Ministry of Health, the event was streamed live to many more viewers.

The ceremony was headed by the Chief Rabbi of Russia Berel Lazar, who has accompanied the development of the local Jewish community since its inception close to two decades ago. As the community’s friend and supporter, philanthropist Boruch Bentzion Gurwitz, who has been investing in local real estate, took upon himself to build a large and impressive Community Center six stories high that will host the shul, Chabad House, mikva, classrooms, and other Jewish activities headed by the borough’s shliach Rabbi Yochanan Kosenko.

The cornerstone was cast and laid in the building’s foundations by the Chief Rabbi of Russia, who spoke emotionally before the crowd, thanking Hashem for the miracles and wonders that we are experiencing in these times, just as in the days of old. He expressed his blessings that the building be completed very soon, to the delight and enjoyment of all Mitishi’s Jews who need an active, inviting Jewish community center.

The actual cornerstone is from the village of Lubavitch, and was taken from an area adjacent to the Ohel of the Rebbe Tzemach Tzedek and his son, the Rebbe Maharash. It was brought from there by Mr. Gurwitz, along with an additional friend of the community, Rabbi Yitzchak Kogan, Rabbi of the Bolshaya Bronnaya community, who also spoke during the event.

The celebration was graced by the presence of the director of the Jewish Community Center in Moscow, Rabbi Mordechai Weisberg, the Military Chaplain, Rabbi Aharon Gurevitch, rabbis and shluchim from surrounding neighborhoods, government representatives, and supporters and friends of the community.

As the ceremony came to a close in the late afternoon, all were immediately invited to daven mincha, light the Chanuka candles, and continue on to a Chassidishe farbrengen on the shul’s temporary premises.