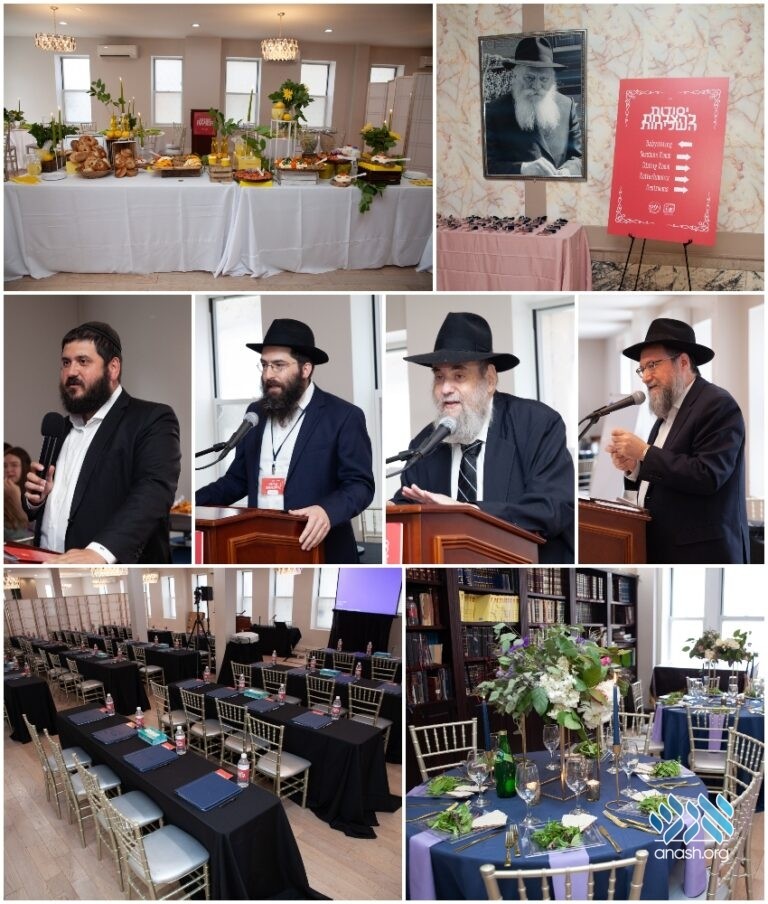 Nshei Readers: Click here for the article with a full gallery.

For the past three days, crowds of women could be seen congregating in the Ulam Chana in Crown Heights. They were united by their interest in learning the fundamentals of shlichus and how to follow the Rebbe’s horaos in every aspect of a shlucha’s life. Some are still within the first couple of years of their shlichus, some are moving shortly, and others are seeking positions and plan to move in the future. They were the first group of women to participate in the Yesodos L’Hatzlachas Hashlichus Seminar for women, organized by the “New Shliach Desk” at Merkos 302, in partnership with Rabbi Bentzi Lipskier of the Meromim Foundation.

The sessions, each presented by experienced shluchos or rabbanim, covered topics culled from the Rebbe’s sichos and horaos. The sessions covered topics ranging from the intrinsic quality of women, to halachic questions that often arise on shlichus, how to find and maintain a proper balance, providing chassidishe chinuch for children growing up in non-frum communities, establishing support systems to navigate the sometimes overwhelming shlichus, and more.

“This seminar allowed us to impart the yesodos to ensure the long-term success of the shluchos and their shlichus, B’ruchniyus, B’gashmiyus, and Nafshiyosdik,” says Rabbi Mendel Chaiton, a lead developer of the program. “We’ve had great success with the workshops for men, and baruch Hashem we now have a strong foundation for continued workshops for women as well.”

Mrs. Stery Goldberg worked assiduously with a va’ad of rabbanim and a va’ad of experienced shluchos to create a seminar based on the Rebbe’s horaos that would be timely, relevant, practical, engaging, and inspirational.

“I’m really glad I attended,” says Mrs. Mushkie Loschak, who will be starting her shlichus in Montecito, CA in the summer. “Each session was well thought out and gave me a lot of valuable tools and skills for my shlichus. I feel like I can start my shlichus on the right foot now. Hearing the Rebbe’s horaos helped me gain the proper perspective that will ensure our shlichus is set up with a foundation that will impact ourselves, our children, and our community.”

Mrs. Leah Rosenfeld of Lake Worth, FL, kicked off the seminar with a powerful session addressing the mehus of a shlucha and the importance of constant inspiration to remind each shlucha of her responsibility to carry out her shlichus according to the Rebbe’s directives.

The power of a woman and her call to handle so many responsibilities was addressed by Mrs. Shifra Sharfstein of Atlanta, GA. She gave tips and tools to maintain the delicate balance of family life and shlichus, and how to juggle the needs of her children with her own, her husband’s, and her community’s.

A halachic discussion, headed by Rabbi Sholom Ber Shuchat, referenced common shaylos in the kitchen, running programs on Shabbos and Yom Tov, dealing with families who don’t follow the Torah’s culture, and practical suggestions for how to avoid yichud.

Rabbi Yosef Shagalow spoke about the importance of limiting internet usage for personal wellbeing and shalom bayis. He also addressed other matters of shalom bayis for the new shliach and shlucha, and how to maintain a healthy sense of self.

The Rebbe’s shitos on the correct support to seek in various situations was covered by Mrs. Chanie Wolf of Crown Heights, while Mrs. Malkie Rivkin of New Orleans, LA spoke about the importance of chinuch and how to provide children with chassidishe chinuch in a shlichus atmosphere.

A panel, headed by Mrs. Raizy Mendelsohn of Jackson Hole, WY and Mrs. Moussia Goldstein of Philadelphia, PA, gave the new shluchos various insights into those first few challenging years and how to maximize their potential for effective growth and make connections with their community.

Rabbi Efraim Mintz spoke about interpersonal relationships and how to build strong connections with employees, employers, and other shluchim in the area. The seminar was rounded out by Mrs. Rivky Brikman of Seagate, NY’s insightful talk on simcha, its vital importance to a shlucha, and how to maintain a positive attitude in challenging times.

The shluchos were also honored by an address from Mrs. Bassie Garelik, a veteran Shlucha to Italy who shared with them a letter she personally received from the Rebbe. She offered them words of encouragement and strengthened them in their new endeavor.

The gashmiyus was also given consideration, and the event was beautifully set up, with plentiful refreshments, and a convenient babysitting option.

Each participant also received a booklet containing a comprehensive list of Merkos 302 resources and how they can best serve a new shlucha.

The seminar also provided the shluchos with the opportunity to make new friends and expand their network of support.

“The sessions taught us to talk to friends in similar shlichus positions when we face challenges,” commented Chana Loewenthal, a shlucha in Copenhagen, Denmark. “And then you turn around, and you are surrounded by shluchos who fit the bill exactly!”

The seminar’s tremendous success was due to the tireless efforts of Mrs. Hadassa Hecht and Mrs. Stery Goldberg.

“The goal of the seminar was to put forth the yesodos the Rebbe has shown us with regards to the immense zechus and responsibility we have to go on Shlichus,” said Rabbi Mendy Shanowitz, from the New Shliach Desk at Merkos 302.

Rabbi Moshe Kotlarsky, Vice Chairman of Merkos L’Inyonei Chinuch summed it up: “The benefits of integrating the proper yesodos before setting out on shlichus are invaluable,” he said. “This seminar was a pivotal step in giving the new generation of shluchos the tools they need to build a thriving shlichus.”

Nshei Readers: Click here for the article with a full gallery.