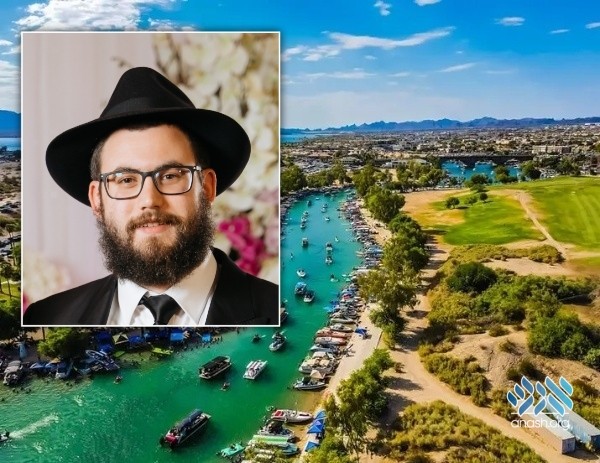 Rabbi Zalman Levertov, regional director of Chabad of Arizona, has announced the establishment of Chabad of Lake Havasu City, to be directed by Rabbi Mendel and Itta Super

Tucked away in western Arizona, Lake Havasu City is a fast-growing town popular with retirees and young families and home to a thriving tourism sector. Surrounded by mountains and the shimmering waters of Lake Havasu, it’s a picturesque destination—and holds the record of the hottest temperature ever recorded in a U.S. city.

Located on the California state line, Havasu, as the locals call it, is home to an estimated 600 Jews and is visited by more than a million tourists annually. Snowbirds flock there in the winter for its warmth, and it’s a popular retreat for Southern Californians, with many owning second homes there and visiting for the weekend.

The town was built by developer Robert P. McCulloch in 1963, on what used to be an old military rest camp during World War II. When the city of London was looking for a buyer for its iconic London Bridge, McCulloch bought it and brought it over brick by brick, reconstructing it over dry land and then digging a channel to create an island. The city took off, going from nobody to 60,000 people in just a few decades.

While its remote location—some 150 miles from the nearest large city and other Shluchim—increases the allure of Havasu, it means that opportunities to experience authentic Yiddishkeit are limited. Rabbi Mendel and Itta Super with their young daughter, Kayla, are moving in just three weeks to build the only Chabad House in Arizona’s largest and most isolated county.

Rabbi Zalman Levertov, regional director of Chabad-Lubavitch of Arizona, first visited Lake Havasu City in 1978—the same year the city was incorporated—and sent Merkos Shluchim there for decades. In 1984, Rabbi Levertov, along with Rabbi Yossie Shemtov of Tucson, printed the first Tanya in the city, setting the spiritual groundwork for what would eventually follow. In recent years, as the population grew, Rabbi Levertov began fielding calls from residents who wanted a Chabad House and he soon found the Supers.

The Supers visited for Purim to get acquainted with the local community and ran a Purim program. This past Pesach, more than 50 people joined Chabad for their inaugural Seder.

“We are privileged to be one of the 1210 new mosdos established in honor of Yud Aleph Nissan,” said Rabbi Super. “The Torah was given in the desert and we are sure it will flourish in this desert too.”

They will also be visiting Kingman, a city more than an hour north in the hopes of establishing a stronger Jewish community there. In addition, they will visit other Colorado River cities including Bullhead City, Fort Mohave, and Parker.

Help them transform the landscape of the region, one home and one neshamah at a time. One more girl lighting Shabbos candles, a child learning Aleph Beis, another home with a mezuzah, and another family joining a Shabbos meal.

You can be a partner in establishing this new Chabad House by visiting ChabadHavasu.org/give.