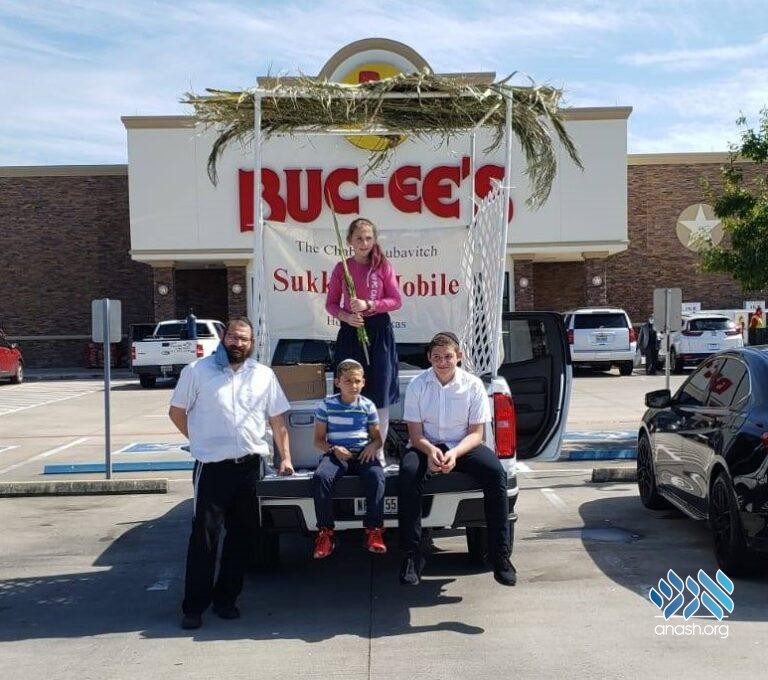 At the peak of the pandemic, Rabbi Saadya and Chaya Sara Kaufmann established Chabad of Texas Towns, to serve the thousands of Jews spread out across the vast expanse of rural Texas.

Amid 40,000 square miles of tumbleweed flatlands and the occasional cowboy rancher herding cattle and horses—deep in the heart of Texas’s hub for livestock and oil rigs—finding 10 Jewish men for a minyan (prayer quorum) is no simple feat.

But sure enough, Chabad of Texas Towns was born there last June to serve a few thousand Jews spread out across the vast expanse of rural Texas. Reaching out to Jews in the far-flung areas of the Texas outback is not your average run-of-the-mill life of Chabad-Lubavitch emissaries, but the natives of the area say they sure are glad Chabad is there.

Janine Gorrell of Lubbock, Texas, says she’s happy there is finally a regular Jewish presence in the Texas Towns. “I’ve been clamoring for years to get Chabad here,” she says in her warm-hearted, amiable tone. Although there had been the “Roving Rabbis,” groups of young Chabad rabbinical students who traveled around the area on Jewish holidays and during the summer, there was never a Chabad rabbi dedicated to the area.

Gorrell says her first involvement with Chabad came when she was living in Houston. Her son, who she describes as having been a very likable child who “got along with everyone,” was having some academic challenges in his fourth-grade class. The social worker involved with navigating the delicate situation knew of Chabad of Uptown and advised, “Call Chaya Lazaroff,” which she did. She remembers how Lazaroff, a dedicated teacher and co-director of Chabad of Uptown had told her, “Bring your child’s paperwork, and we’ll make it work. Every child is a gift from G‑d,” and they lovingly took her son into the Torah Day School.

Chabad later profoundly impacted Gorrell’s family when her son attended college at the University of Texas in Austin. “Chabad was a godsend,” she says. Her relationship with Chabad has only become stronger over the years. “What can I say? We love being Jewish,” she says.

For a number of years, Rabbi Chaim Lazaroff of Chabad of Uptown has seen a need for there to be a more active Jewish presence in rural Texas. Rabbi Saadya Kaufmann, who works for the OU (Orthodox Union) as a supervising rabbi, inspecting and helping maintain high kosher standards at various food manufacturers around rural Texas which frequently takes him to the region agreed to take responsibility as official Chabad representative.

Kaufman and his wife, Chaya Sara, still live in Houston, and the rabbi said that launching a new Chabad center during the coronavirus pandemic has been sometimes challenging but at the same time a welcome opportunity.

In the fall, the Kaufmanns organized a Sukkah mobile that traveled through the Texas area, and on Chanukah, they held the first-ever public menorah-lighting in Beaumont, which was attended by a crowd that included Mayor Becky Ames.

Kaufmann makes a point of being in regular communication with the people he’s met. “We talk to people over the phone and have a weekly class over Zoom, which has been very well-received.” He describes how there were two women on the call who discovered they were both from Syria and were excited to find that out.

“The population of Jews in the area is very small,” says Chaya Sara Kaufmann, who works as the director of the Chabad preschool in Houston and, for now, encourages her husband’s trips from afar. “Since my focus is primarily on the preschool, I’m supportive of him traveling, but I haven’t really been going there much myself yet.”

The couple has already made inroads around the state.

Their children, on the other hand, are very involved and enjoy accompanying their father on his expeditions. When asked how her kids are adapting to this relatively new lifestyle, she responded that when she and her husband had told them about the new opportunity, “it was like they’d won a million dollars.”

“Most people become emissaries near the beginning of their marriage,” she relates. “My husband and I have been married for almost 16 years. The truth is, we’ve always wanted to go on shlichus. For my kids, to be able to join the ranks of the emissaries, having a few fellow shluchim in their class at school, they were beyond thrilled.”

With Covid, it’s been “slow but steady,” says Rabbi Kaufmann, but he looks forward to expanding their programming once people start to get the vaccines. “The Rebbe [Rabbi Menachem M. Schneerson, of righteous memory] really wanted us to do everything we can to reach every single Jew wherever they are.”

Deep in the heart of Texas, “we’re proof of that.”