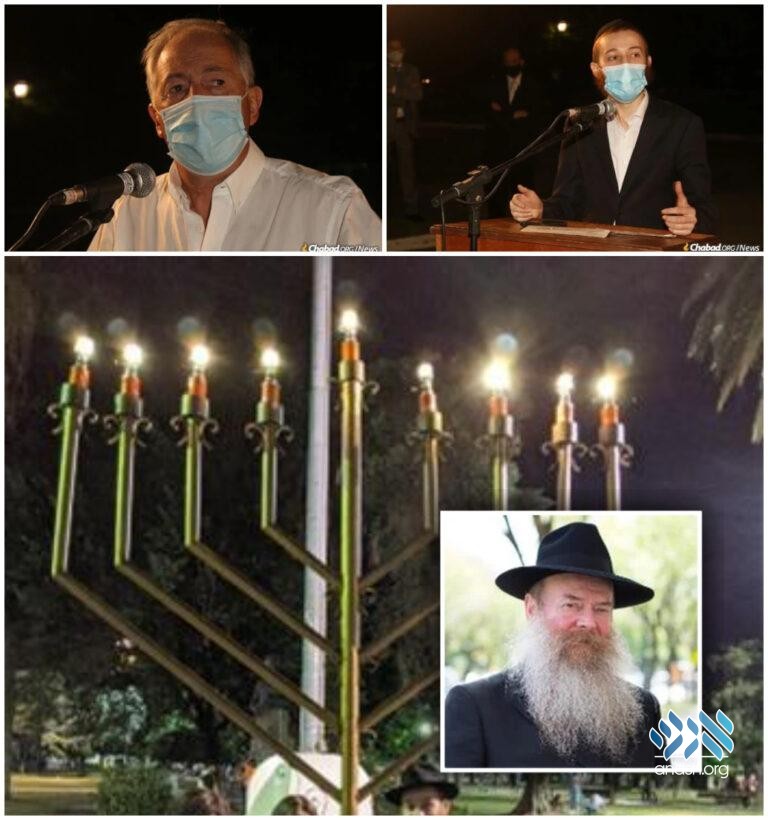 Five Years after the passing of Argentina Shliach Rabbi Moshe Freedman, his son Shmuel moved back together to Bahía Blanca, Argentina, with his wife Shterni, to serve as shluchim, arriving just hours before a ceremony honoring his father’s memory.

One of the closest communities to the South Pole, the Jewish residents of Bahía Blanca, Argentina, have had its fair share of challenges.

Many of the Jews there are Ashkenazi descendants of European immigrants, who were attracted to the bustling port city and the surrounding villages in the early 20th century. Many of them had settled in small towns and farming communities due to the largesse of Baron Maurice de Hirsch, who sponsored rural farming communities across Argentina, where impoverished Jews from Eastern Europe could find financial stability and safety from pogroms.

The Jewish population was further bolstered in the middle of the century by an influx of Holocaust survivors. Among the crowded single-family dwellings and apartment blocks of the industrial city, one could occasionally hear Yiddish interspersed with Spanish as Judaism took root in a hidden corner of the southern Atlantic coast.

But years passed, and the rich religious and cultural Jewish life in the city slowly ebbed away, eroded by emigration, intermarriage and indifference.

Over the past three decades, the Jewish community of Bahía Blanca has seen its ranks dwindle to less than a third of its former size with many of its members have fallen into poverty, and its longtime spiritual leader, Chabad Rabbi Moshe Freedman, passed away in 2016 at the age of 57.

Yet, despite their remoteness, they have maintained a communal infrastructure and positive outlook.

The rabbi’s widow, Sarah Freedman, has been doing her best to maintain Chabad activities and even expand them, including an extensive humanitarian arm, which feeds hundreds on a monthly basis.

Under her watch, the Chabad center, housed in a second-story addition above her home, opened a kosher bakery and religious services kept up, often receiving a boost when the Freedman children would visit.

Most of the 10 Freedman children have married and become Chabad emissaries in the United States, China, India and Germany, while the youngest are studying in yeshivahs abroad.

Following the High Holidays, the Freedmans’ seventh son, Rabbi Shmuel Freedman, and his wife, Shterni, who married in 2019 in Detroit, decided to move to the city to serve the community’s needs.

“We will be serving every part of the population: youth, students, families, seniors—everyone, on a personal level,” says Shmuel Freedman, affectionately known as Shumi. “There is so much to do here, and we are excited to begin.”

“It’s something I have always wanted to do,” says the 24-year-old rabbi. “This is a small community, but to us, this will be our home.”

But getting home proved to be difficult. Ever since the coronavirus pandemic swept across the globe last spring, Argentina has been under an extreme lockdown with no foreigners allowed into the country. That meant that Shterni Freedman, a U.S. citizen who grew up as a Chabad emissary in Oak Park, Mich., would not be allowed to enter. Neither would the couple’s infant daughter, Mussia.

Undeterred, the young rabbi tried his hardest to gain entry for his family into Argentina, as did community members who were eager to have a rabbi in their midst—something they had been lacking since the elder Rabbi Freedman’s passing.

“The community desperately, desperately needed a rabbi,” attests Jorgé Greenberg, a native of Bahía Blanca, who works the administrative offices of one of the city’s major hospitals.

As word spread that the young rabbi and his family were planning to join them, excitement mounted. “Finally, we would have someone to fill the great need we all have,” expresses Greenberg. “How much more exciting that the rabbi is a Freedman, who knows us and has a feeling towards our city and our people.”

But the bureaucratic challenge seemed to be insurmountable, and it didn’t appear that the young Freedmans would be able to join their mother in serving the community in the near future.

Then came Chanukah, the “Festival of Lights,” when we are reminded that miracles happen, “in those days [and] in these times.”

‘We Will Work Together’

Since 1986, the Jews of Bahía Blanca have always celebrated Chanukah with a public menorah-lighting outside City Hall.

Bahía Blanca’s first giant menorah had been arranged that year after the rabbi, who had arrived only a year and three months before and barely spoke Spanish, heard a recording of the Rebbe speaking on the second-to-last night of Chanukah. During the course of the talk, the Rebbe stressed how important it was to arrange public lightings, urging that those places that had not held them thus far should at least arrange them for the final night and noting how even non-Jews would be happy to assist.

Disregarding the fact that barely 48 hours remained of Chanukah, the young rabbi booked a meeting with the mayor; less than 12 hours later, a 10-foot menorah stood proudly in front of the City Hall. The community, then numbering 1,300 families, came out en masse for the celebration, and a new tradition was born.

This year, the municipality of Bahía Blanca decided to use the menorah-lighting to pay tribute to and grant the title “honorary citizen” upon their late rabbi, whom they had come to know and love in the course of his 30 years of dedicated service.

Official requests were made at the highest levels, directives were dispatched to the Consulate General of Argentina in New York, and the Freedman family found themselves with the necessary paperwork to enter Argentina. The permits were furnished, thanks to the close coordination of the consulate with the Argentinian government and the central headquarters of Chabad in Argentina, headed by Rabbi Tzvi Grunblatt.

Flying through Buenos Aires, the Freedmans and their baby arrived in Bahía Blanca just two hours before the event.

Shuttling to city hall, they saw that even ominous predictions of rain could not prevent the Jews of Bahía Blanca from coming out to honor their longtime rabbi and welcome their new one.

The celebration was replete with brass-heavy klezmer music and streamed live over Zoom for all those who could not safely attend.

“I want to use the opportunity to thank Rabbi Moshe and Sara for the dedicated work to the community for over three decades,” said Mario Brailovsky, former president of the local Jewish community and prominent businessman, one of several speakers. “And I welcome Shmuel, who from a very young age would accompany his father in his rounds to bring Jewish teachings and the joy of Judaism, as Chassidim know how to. We now welcome him with his family to lead the Bait Chabad in an auspicious time. He has the support and backing of the community, and we will work together.”

And as night fell, the menorah was kindled, and a new day dawned for the Jews of Bahía Blanca.

To support the new shluchim, donate at https://www.chabadbahia.com/new-shluchim.html