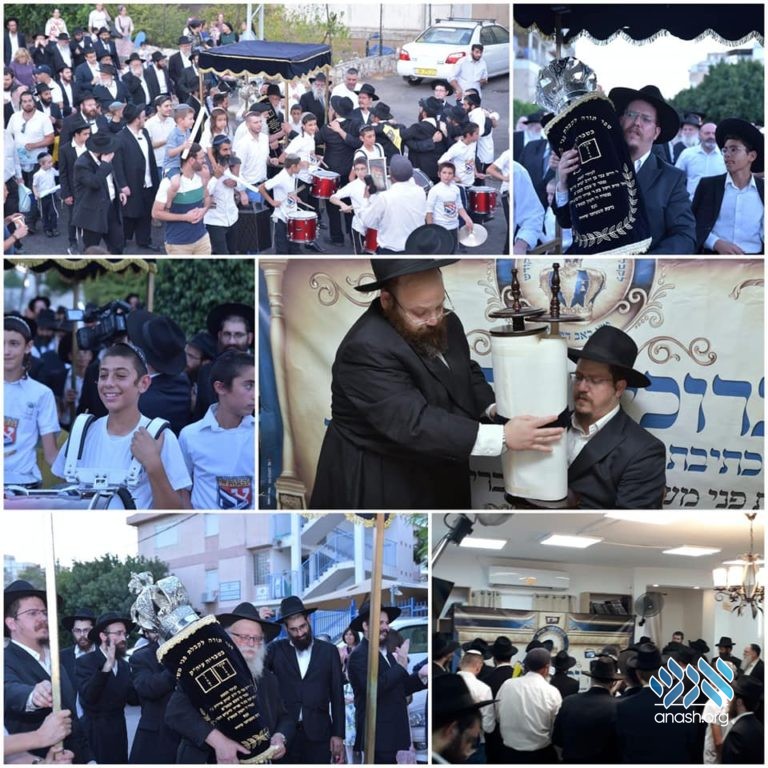 On Erev Chamisha Asar B’Av, Tverya, one of the four holy cities in Eretz Yisroel, forgot about the strife and tensions in that city between Jews of different levels of observance. Instead, they sang and danced and took pride in their Judaism. A new Sefer Torah, dedicated for just that reason, to bring Jews closer and end the division, was how it got done. The Sefer was donated to the central Beis Chabad in Tverya.

Hundreds marched, joining the Shluchim to Tverya, as well as those from surrounding areas. Many residents expressed their excitement about the unique event; with the hachnosas Sefer Torah being viewed as a sign of the recent boom in Chabad activities and development of mosdos there. The sight of the shluchim joining together and sharing the stage brought a great sense of pride, with the Kiddush Hashem and Shem Lubavitch apparent to all.

The “story” of the Sefer Torah is quite special. Some 24 years ago, N’shei Chabad in Tverya, with Mrs. Gittel Rosenberg at the helm, decided to write a special sefer Torah in honor of kabbolas p’nei Mosiach. “Technical, as well as financial difficulties kept the Torah from reaching completion,” Rabbi Kramer told those gathered at the festive meal. “We never forgot about the Torah, despite the amount of time that had passed since,” he added. Rosenberg family members donated the kesser (crown) in memory of her and her husband, Reb Yishai, a”h.

Recently, the project received the necessary push from Chabad House supporters, who are selflessly devoted to the needs of the people of Tverya. “We thank them for their encouragement and support,” Rabbi Kramer added. “Without them we couldn’t have gotten it done. This will definitely increase the achdus in this city, and will increase in Tverya’s preparation for the coming of Moshiach,” Rabbi Kramer said. He then took the opportunity to bless the donors and wished them much success in all their endeavors.

The festivities began at the resting place of the Rambam in Tverya, where the writing of the final letters took place, under the direction of sofer Rabbi Aryeh Farkash, the shliach in nearby Yavniel. The next stop was the Yeshiva Tomcehi Tmimim, where dignitaried wrote letters, with the Rosh Yeshiva Rabbi Boruch Levanoni being honored with Hagbah. The minhag that the Rebbe instituted at the completion of Moshiach’s Sefer Torah in 5730/1970, namely saying the kapitel chof (ya’ancho) posuk by posuk, was also observed.

Head shliach Rabbi Yosef Kramer told the assembled about the hachnosas sefer torah back then, and noted the fact that this was seemingly the first time that anash were following the minhag, which definitely causes much nachas to the meshaleach.

The parade then continued from the yeshiva to the Chabad House, with the Lubavitcher cheder marching band leading the way. Hundreds of residents marched along. One resident remarked: “The joy of Chabad is all of ours, we feel like we’re one family here.” Upon arriving at the shul, hakafos were made, with the dancing going on and on.

A beautiful seudas mitzvah rounded out the day’s festivities, emceed by the shliach to Northern Tel-Aviv, Reb Mendy Gerlitzky. Participants were also treated to a beautiful choir of the cheder boys.

The event was prepared by the impeccable M.L.Goodman. Productions. Photos; Shlomo Amiel.