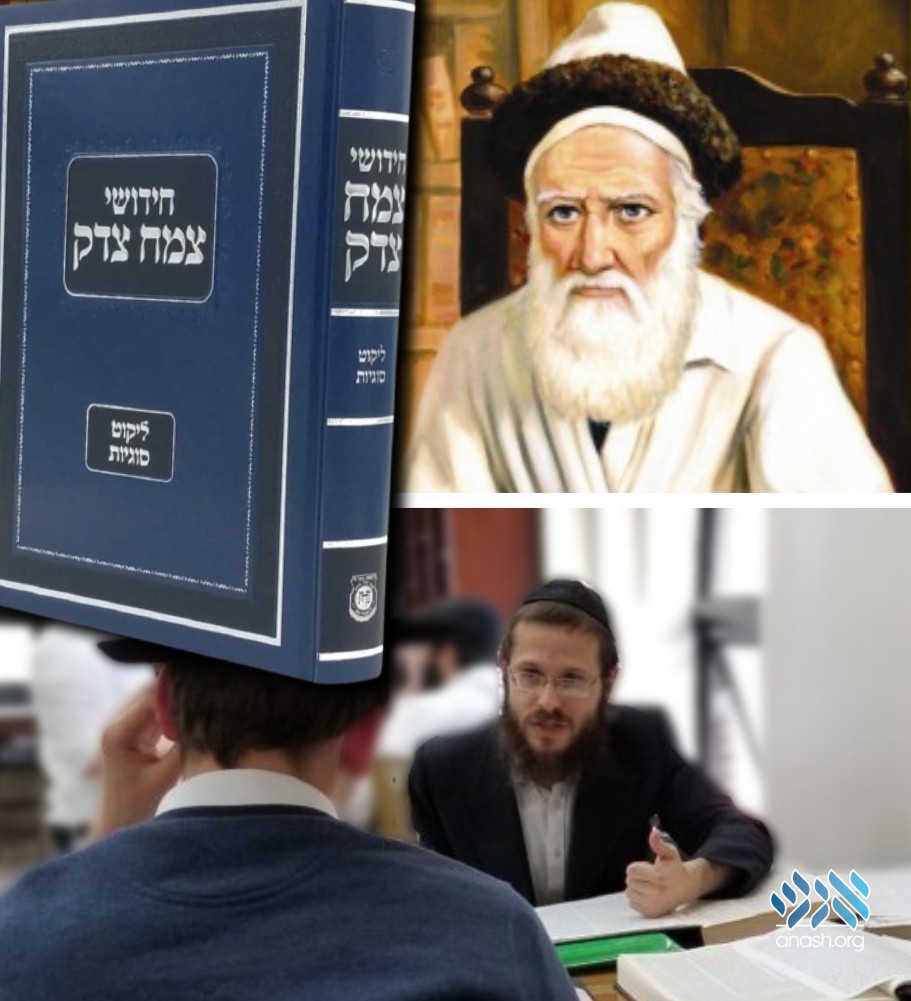 A new sefer by a young Lubavitcher Maggid Shiur presents the Tzemach Tzedek’s chiddushim in Gemara and Halacha in a clear and accessible manner, allowing access to Torah that was previously reserved for scholars.

A new sefer by a young Lubavitcher Maggid Shiur presents the Tzemach Tzedek’s chiddushim in Gemara and Halacha in a clear and accessible manner, allowing access to Torah that was previously reserved for scholars.

The sefer, “Chiddushei Tzemach Tzedek – Likkut Sugyos” was published in continuation to the other projects relating to the Tzemach Tzedek’s Torah in connection with his 150th yarzeit, and arrived in Crown Heights in time for 29 Elul, the birthday of the Tzemach Tzedek.

The sefer was compiled by Rabbi Avrohom Chaim Stern, maggid shiur of Shiur Hey in Oholei Torah. Although he is in his early thirties, he has already published hundreds of pages of Chiddushei Torah in various kovtzim. Even while this new sefer was being prepared for print, Rabbi Stern was already working on his upcoming sefer on the Alter Rebbe’s Hilchos Nidda.

Rabbi Stern told Anash.org that the goal of the sefer is make the Tzemach Tzedek’s chiddushim more accessible,

“At that time, the Rebbe wrote (Igros Kodesh vol. 3 pg. 17) that he was investing much work and effort in redoing the seforim. The Rebbe also complained that chassidim are not ‘koching’ enough in the Tzemach Tzedek’s seforim.

“In later years also, the Rebbe always pushed hanhala of various yeshivos and bochurim to learn and quote the Tzemach Tzedek whenever possible,” he said.

Notwithstanding the great ‘treasures’ contained in the Tzemach Tzedek’s seforim, their study can be a challenge for most people, especially to the layman.

“First of all, the Tzemach Tzedke’s style is one of hispashtus – a broad manner. This makes it difficult to ‘halt kop’ to follow what the point the Tzemach Tzedek is trying to bring out. In addition, many tshuvos were written about topics that are very complicated and not too relevant to today’s day and age,” Rabbi Stern said. “Thirdly, the responsa were written in response to questions posed by renowned rabbonim, who were intimately familiar with the subjects. To the average person, however, it becomes very hard to learn Tzemach Tzedek, and to appreciate the chiddushim contained within.”

In the new sefer, the responsa were compiled in a way that allows one to follow the subject from beginning to end, by removing the parts of the tshuva that are not directly relevant to the case being discussed, and by bringing additional sources where the Tzemach Tzedek discusses the same topic.

Furthermore, extensive footnotes and references were added, in order to make it easier to refer to other seforim discussing the topic and appreciate the Tzemach Tzedek’s chiddush. The topics chosen for the sefer were also more general topics that are easier to learn, and can also serve as a springboard to many other topics.

All this was done while sticking to the original wording of the Tzemach Tzedek, without adding anything to his original words.

“It is our hope that the sefer will make it easier to learn Tzemach Tzedek, and bring a bigger enthusiasm to its study, allowing many to taste the wonderful chiddushim. Hopefully, when there is a bigger focus in Lubavitch on the Tzemach Tzedek, this will automatically cause others from outside Lubavitch to begin ‘discovering’ it as well,” Rabbi Stern said.