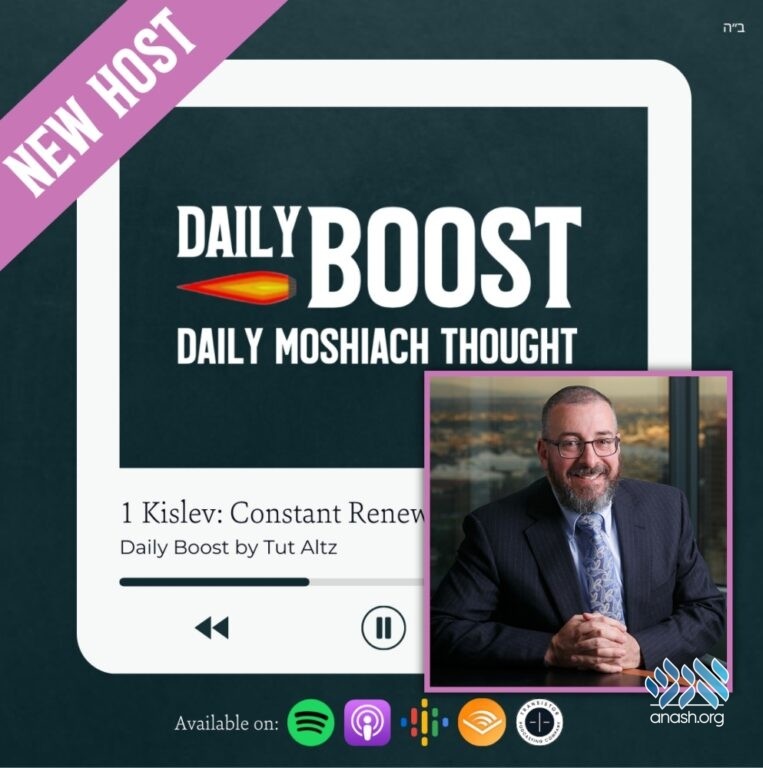 With some episodes as short as forty-nine seconds, while others run for as long as ninety seconds, the Daily Boost podcast packs a powerful vort of inspiration regarding Moshiach in bite-sized increments.

Running a Chabad house on Jamaica’s Caribbean shores might sound idyllic, but sometimes it can be hectic. “One day, you’ll have plenty of time to learn,” says Rabbi Yaakov Raskin, Shliach to Jamaica, “and the next day, you’ll be rushing to help people until the clock runs out.”

It can be hard to sustain the inspiration on those fast-paced days, and Rabbi Raskin is not alone. Thousands of Lubavitchers worldwide find themselves hard-pressed to squeeze uplifting learning into their busy schedules. “You get to the point where you really need a boost of energy,” Rabbi Raskin says.

On one of those frantic days, Rabbi Raskin pressed play on the Daily Boost podcast by Tut Altz. It was sixty seconds long and promised to share a quick idea about Moshiach. “Nobody can say they don’t have sixty seconds to learn about Moshiach,” he says. Sure enough, sixty seconds later, he was hooked. “I thought, ‘Wow, that is awesome.’” It’s now part of Rabbi Raskin’s daily routine, and he shares each day’s episode with friends and community members.

Since Tishrei 5783 began, Rabbi Shlomie Naparstek, director of The Moshiach Office at Merkos 302, has overseen the professional production of a daily, one-minute podcast on inyonei geulah u’moshiach entitled the Daily Boost. “The greatest things come in small packages,” he says, “every day we choose a powerful message that will be maximally meaningful to anyone who has a minute.” It’s not just a podcast; the Daily Boost is also available in print format.

Some episodes are as short as forty-nine seconds, while others run for as long as ninety seconds, but every Daily Boost packs a powerful vort of inspiration. Every episode is available wherever podcasts are found, and a neatly organized archive of all past episodes is available at tutaltz.com/dailyboost.

The iconic voice behind The Daily Boost podcast is that of Mr. David Werdiger, a Melbourne businessman and lecturer, “I’m thrilled to be involved in this production,” he says, “Taking time out of my work day to record these gives me a spiritual boost, and it’s lovely to get feedback from the most unlikely people whom this reaches.”

Rabbi Yaakov Raskin says the Daily Boost’s flexibility makes the podcast a “no-brainer” for anyone who wants to squeeze a little learning into their day. “If you’ve got a minute, you’ve got time to refocus and be inspired by the Daily Boost,” he says.