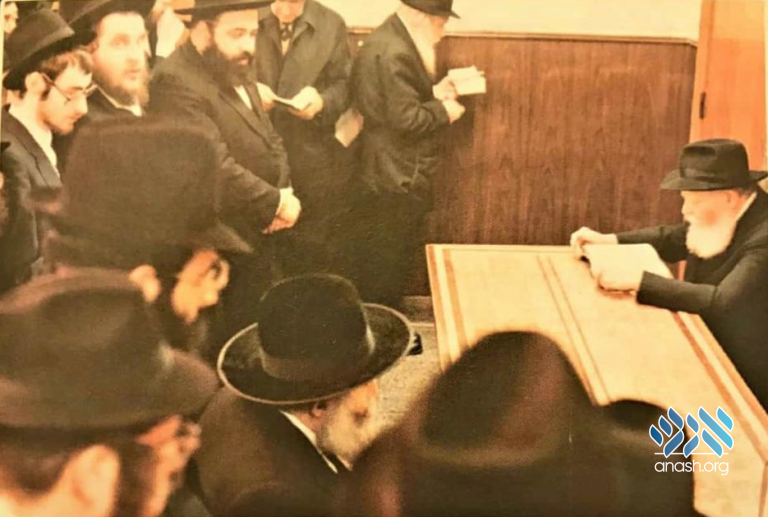 A new volume in the biography series of the Gerrer Rebbe, Rav Pinchas Menachem Alter, the “Pnei Menachem,” reveals new information about his visits with the Rebbe.

A new volume to the biography series of the Gerrer Rebbe, Rav Pinchas Menachem Alter, known as the “Pnei Menachem,” sheds new information of his visits with the Rebbe and contains a never-seen picture of the Pnei Menachem attending a tefilah with the Rebbe in the upstairs zal.

At the time the picture was taken, he served as Rosh Yeshiva in Yeshiva Sfas Emes in Yerushalayim, and his brother, the “Lev Simcha,” was the Gerrer Rebbe.

In the photo, Rav Pinchas Menachem can be seen sitting foreground with the felt hat. R’ Meilech Neiman, Gerrer chossid and Boro Park activist, and you might say the Gerrer Rebbe’s “shliach” to Lubavitch, is standing in the back left. Reb Meilich was often seen visiting the Rebbe and conveying regards about the Lev Simcha’s health and well being. Next to him is R’ Yosef Yitzchok Cohen, a gabbai of the Lev Simcha and a friend of Lubavitch.

Debates have risen regarding the exact date of the picture.

The book dates the picture as having been taken on 13 Adar I, 5744/1984. However, those who were present say otherwise.

Community activist R’ Eli Slavin shared that the photo was taken during sefirah days and that this was taken during a minyan Maariv. The occasion of the visit to New York was the pidyon haBen of the then-Rosh Yeshiva’s grandson, Reb Avrohom Mordechai Alter, today living in Yerushalayim.

The child’s father was Rav Aryeh Alter, who was tragically killed in a car accident at the young age of 28. He was the son-in-law of Rav Menashe Klein of Boro Park, the Ungvar rov and author of the Mishneh Halachos series of Tshuvos. Rav Aryeh was a tremendous talmid chochim and had a bright future ahead of him, before his life was cut short.

Slavin recalls how exiting the yechidus R’ Meilech asked Rav Aryeh Alter, “vi kimt es az der tatte hut nisht gevist?” – “How is it possible that your father didn’t know?” To which Rav Aryeh responded: “er iz doch nisht kein Rebbe!” – “He is not yet a Rebbe!” It seems that in the course of the yechidus, the Rebbe had to remind Rav Pinchas Menachem of some Torah source.

R’ Eli can be seen in the photo standing behind the Rosh Yeshiva. At the beginning of maariv, the Rebbe motioned to him to make sure that the Rosh Yeshiva can sit after Borchu, which he did. He also helped the Pnei Menachem find the place for Sefiras HaOmer in the Siddur Tehillas Hashem.

Anash.org spoke to R’ Yosef Yitzchok and he concurred (“l’fi meitav zichroni“) that it was during the sefirah days, not during Adar. He recalls that the bris of young Avrohom Mordechai was on Pesach and the Pnei Menachem could not come then, so he came to the pidyon HaBen instead.

He remembered that he had suggested to the Rosh Yeshivah that they stay for maariv after the yechidus. He also recalled how the Rebbe motioned for two bochurim to move out the bench from the table so that Rav Pinchas Menachem could sit down for Maariv.