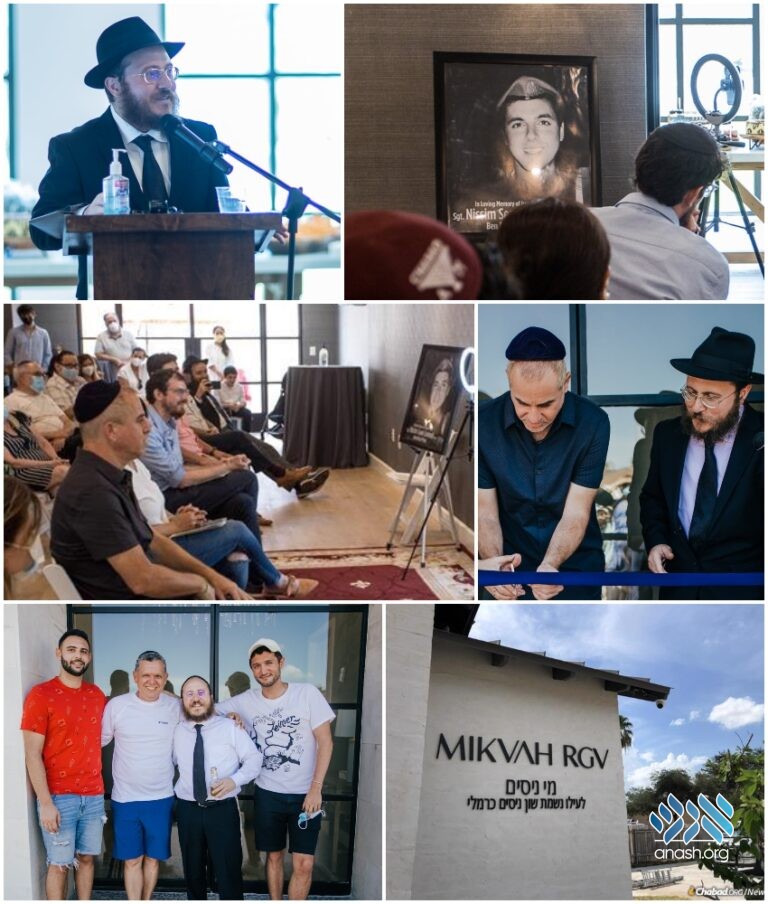 McAllen, Texas, a city with a small Jewish presence for more than 100 years, now has its first mikvah called “Mikvah RGV Mei Nissim,” dedicated in memory of local hero Sgt. Sean Nissim Carmeli, who gave his life during the 2014 “Operation Protective Edge” in Gaza.

Tucked away on the shores of the Rio Grande near the southernmost tip of the U.S.-Mexico border, McAllen, Texas, has had a Jewish presence for more than 100 years with a small but active Jewish population. But a mikvah, the cornerstone of Jewish family life, was never built there.

In the 1980s and ’90s, young Israelis made their way to South Padre Island, a nearby vacation spot, where they invested heavily in the local economy. In time, they experienced a spiritual awakening and began organizing regular prayer services and holiday celebrations. With the help of visiting Chabad rabbis Eli Laber and Asher Hecht, residents organized a Gan Israel day camp for their children and began importing kosher food and other staples of Jewish life.

Asher Hecht went on to found an overnight camp on the Island, and eventually, with his wife, Dini, settled in McAllen, where they direct Chabad of the Rio Grande Valley, serving the needs of Jewish people throughout the valley.

Sean was born to Israeli parents, Alon and Dalya Carmeli, who had moved to the island in pursuit of business opportunities. Over time, along with his parents and two sisters, he reconnected with his Jewish roots and began living a Torah lifestyle.

After spending his summers in the local Chabad day and overnight camps, Sean, who held dual U.S. and Israeli citizenship, completed high school in Ra’anana and then chose to spend time in a yeshivah in the Old City of Jerusalem, immersing himself in Torah study.

Subsequently joining the army, where he served with honor and distinction in the Golani Brigade, Sean volunteered to serve in the operation that ultimately claimed his life.

Following his passing, Rabbi Hecht told the grieving Carmeli family that a new mikvah would be built and dedicated in memory of their son. Seven years later, dozens of community members and well-wishers gathered to inaugurate the nearly-finished facility.

The Carmeli family now lives most of the year in Israel but made sure to attend the dedication ceremony, as did Rabbi Eli Laber, who now directs the Conejo Valley Friendship Circle in suburban Los Angeles.

Noting that Nissim means “miracles,” Alon Carmeli expressed his wish that the presence of the mikvah “bring many miracles to all of our community.”

Dini Hecht described the very fact that a community with less than 300 Jewish souls has built such a beautiful mikvah as “nothing short of a miracle.”

“Today, our community has attained a sense of wholeness,” she said at the dedication. “As we weave the most important thread into the fabric of our community, we can be proud of what we have built.”

“Sean was a kind and gentle soul who was loved by all who met him; you just felt comfortable in his presence,” said Rabbi Hecht, who knew Sean since childhood and watched with pride as he grew into a proud and committed Jew. “This mikvah, the foundation of Jewish family life, will forever be a tribute to this pure soul and his family.”