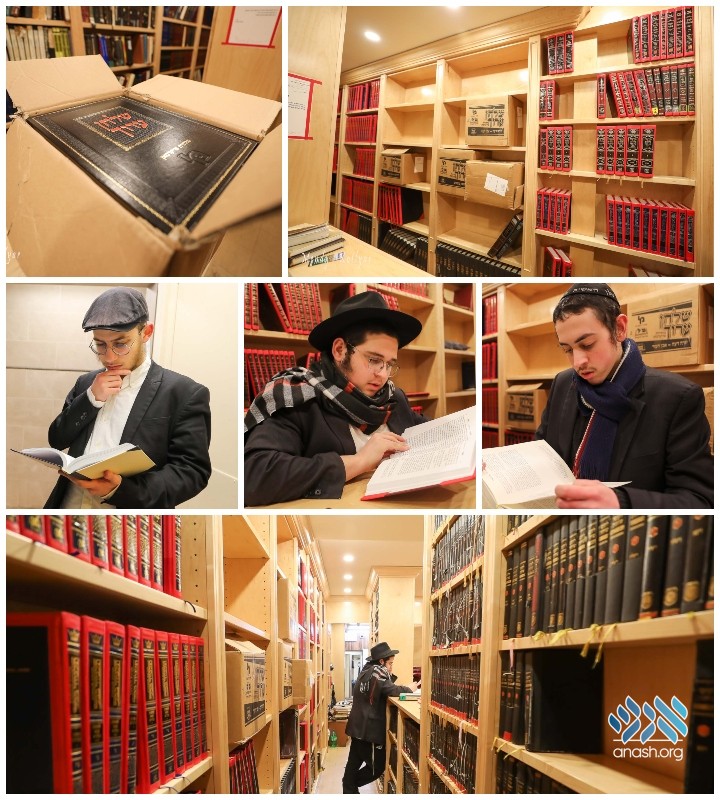 Over the past few months, a new library was quietly built in the back of the main shul in 770 Eastern Parkway for the use of the Yeshiva, and new shipments of seforim are added to the shelves every week.

If one were to take a glance at the back of the big shul in 770 Eastern Parkway, in the area formerly known as “the tunnel”, chances are he wouldn’t believe his eyes.

What used to be a cramped spot where one could catch a early mincha, join a small farbrengen or catch a nap on a table, now is a beautiful library with gleaming white bookshelves and rows of newly bound seforim.

The new library was planned many months ago, when coronavirus was still a unknown word to most people. The idea was raised by Meir Heller, a bochur in 770, together with a group of bochurim who acutely felt the lack of a proper library to service the bochurim of the Central Tomchei Tmimim, who spend their time learning in 770.

“While most other yeshivos have a well-stocked and organized library, for many years 770 only had a few shelves of ‘yeshiva seforim’ downstairs, as well as a small library upstairs which is not always accessible,” one of the organizers told Anash.org.

To solve the issue, they decided to build a full library from scratch, complete with all the basic seforim on Gemara and Halacha necessary for a proper learning experience.

The work began almost a year ago, with the old bookshelves removed and some small repairs being done to the are known as “the tunnel.” Then, just as the new bookshelves were being installed, coronavirus shut down 770 for the first time in history.

However, instead of stopping the work, the lockdown actually gave the organizers and 770’s gaboyim a chance to complete the work without the usual 24-hour hustle and bustle. When 770 was finally reopened after nearly four months, bochurim were greeted by a nearly-completed library and the first boxes of seforim.

In the months since, then, new boxes of seforim have been arriving on a almost-weekly basis. After being bound in a distinctive red tape, the seforim are placed on the shelf for the bochurim to use and enjoy. The seforim include sets of Shas, Artscroll, Tur, Shulcan Aruch, Rishonim, Acharonim and other sets used in yeshivos around the world.

At the same time, tens of news sets of Rambam have been donated to 770, sponsored by Crown Heights philanthropist R’ Yossi Michelashvili and the Michelashvili family. The need for the new sets of Rambam was acutely felt in 770, where one can find people learning Rambam at any time of the day, in accordance with the Rebbe’s takana of daily Rambam study.