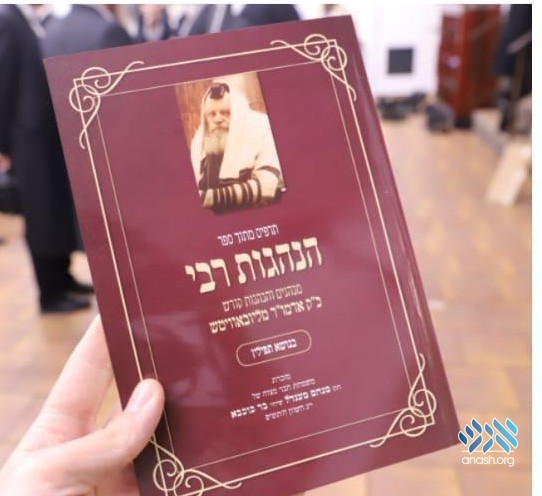 The Rebbe’s minhogim pertaining to all aspects of Tefillin are finally being brought to light in one compilation. Recently, a preview of kovetz “Hanhagos HaRebbe,” was printed in honor of the Kinus Hashluchim.

The kovetz compiles clarifies and organizes in one place all of the Rebbe’s customs pertaining to Tefillin. They include The battim, checking Tefillin, putting on the shel yad and shel rosh, davening in tefillin, when and how to touch and kiss the tefillin during davening, Rabbeinu Tam, Shimusha Rabba and Raavad, putting the tefillin together after davening, as well as mivtzah tefillin.

The sefer is published and edited by Rav Yosef Yitzchok Havlin, the director of Mechon Heichel Menachem in Yerushalayim and the rov of the Chabad community in Ramat Shlomo, Yerushalayim. Other members of the editorial board include Rav Yehuda Cohen, Rav Yakov Hurvitz and Rav Menachem Mendel Reitzes.

The new pamphlet was published in honor of the bar mitzvah of Hatomim Menachem Mendel Bar-Kochva, a grandson of the shliach Rabbi Yitzchok Mishan, which took place this week in Paolo, Brazil.

In addition to focusing on and compiling in this kovetz the Rebbe’s customs pertaining to Tefillin, the publishers have gone through much effort to clarify thoroughly with those that understand the concepts and were witness to the Rebbe’s customs. In addition, comparisons were made to video recordings of the Rebbe during davening, all in order so that the findings published are completely correct.

Rabbi Havin writes the following in the foreword: This that the Rebbe’s hanhagos pertaining to any mitzvah are measured and exact is well known. They are in accordance with halacha as well as with kabbalah. There is much for each and every chossid to learn from them as well.

However, having said that, the Rebbe went to great lengths to try and conceal as much as he could from “prying eyes,” so that what was noticed was only a partial list of the Rebbe’s customs, leaving much yet to be revealed.

Over the last few decades, many have transcribed what they saw from the Rebbe, and been inspired to take upon themselves what they saw as the Rebbe’s customs during davening and otherwise, with several such kovtzim published over the years. Those customs number in the thousands and span the whole spectrum of Torah and Mitzvos. Now they are published in an orderly fashion, with many additional never-before-seen hanhagos added as well.

The sefer is a proverbial “drop in the bucket” of all the Rebbe’s hanhagos. Mechon Heichel Menachem has for decades been working to clarify and bring to light all of the Rebbe’s customs and will continue to do so in the future, be”H. They will include minhogim of the entire year and life cycle, emphasizing the Rebbe’s adherence to Halacha, derech eretz and Ahavas yisroel that were so intertwined in everything the Rebbe did.

In recent years similar seforim covering the Rebbe’s hanhagos on Shabbos, as well as the month of Adar and Purim have been published under the “Hanhagos HaRebbe” label.

The editorial board of Hanhagos HaRebbe, while publishing this booklet, requests the following: being that this is a monumental project, one that needs to be of the utmost clarity and precision, it also carries with it a great responsibility. Therefore, they request the public’s assistance and ask that anybody that has any comment or information about the contents of this sefer, or on the Rebbe’s hanhagos in general, get in touch with the publishers and share their information with others.