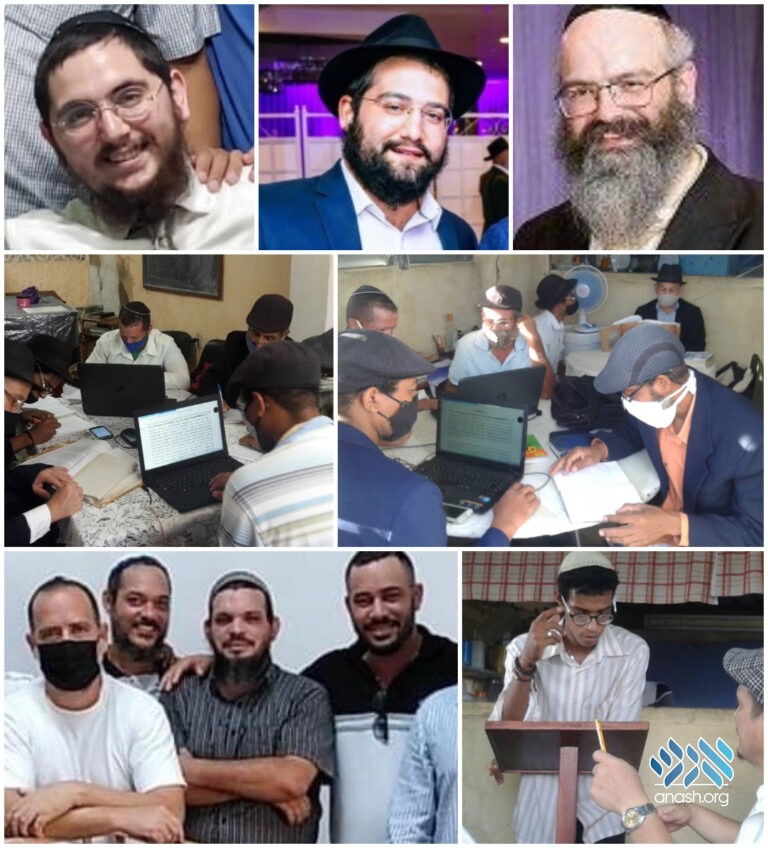 The idea began as per CFCJ’s shlichus experiences via representatives Rabbi & Mrs. Menachem Cadaner. They felt that together with the different learning opportunities which exist on an ongoing basis, there was perhaps room to establish a Kolel, with structured rigorous learning for at least half a day.

Rabbi Cadaner met with a few of the prospective candidates to discuss if this was feasible. He then presented the idea to Rabbi Shimon Aisenbach, director of the CFCJ.

After discussing the details such as a location, curriculum and salary, and arranging the financial aspects, approval was given and thus the Kollel Menachem was created.

The Kolel is presently comprised of a group of 20 committed young men from Havana, Cuba and Santiago de Cuba, all fully devoted to Torah study.

Their daily schedule is quite rigorous. There is an organized seder of limud from 7:00 AM to 1:00 PM and strict attendance is required. Textual study includes niglah and chasidus, and exams are given each week: Sunday on Halacha and Monday on Tanya. All tests are graded and a passing mark is 80%.

Despite the mandatory 80% on their exams, to date most of the marks have been significantly higher, demonstrating their thorough understanding, absorption and internalization of the material being learned.

Acknowledgement is due to Meir Aisenbach who overlooks the curriculum, writes up the tests (of fifty question per week), and grades them all in an organized manner. He records and tracks the participants marks and accomplishments. The exams are thorough and very clear, prepared in English and simultaneously translated into Spanish, and given in a timely manner twice a week.

“This experience has demonstrated the thirst a Jew has to study Torah, as the Navi notes (Amos 8, 11) ‘Not hunger for bread nor a thirst for water, but to hear the word of Hashem.’ Together with this, CFCJ’s bi-monthly payments giving the Kolel members the tranquility to focus seriously on their learning,” notes Rabbi Shimon Aisenbach.

“There is no question that there is a great difference between the contribution that an institution dedicated to Torah study, such as a Kolel or a Yeshiva, gives to a community, over the default Chabad activities, including Torah classes.

“This is indeed inherent to the Torah learning, as is depicted in myriads of Torah sources, the virtue of Torah study over Mitzvos. The Alter Rebbe underscores in Tanya, chapters 5, 23, 37, and elsewhere, that the study of Torah has a unique impact on the learner, and by extension to his entire surroundings and city.

“This would definitely as well be in the spirit of the promise of ‘For the land shall be full of knowledge of Hashem’ (Yeshaya/Isaiah 11:9). The Rambam notes in the Mishnah Torah (Hilchos Melachim 12:5, in the conclusion of the discussion of the Era of Redemption): ‘The sole occupation of the entire world’ – primarily Am Yisrael, as he further points out – ‘will be to know G-d’, which of course principally is about the total immersion of mind and heart in the study of our Holy Torah; niglah and chasidus alike.

“This last year and a half brought about so many challenges to all around the globe, including to Jewish organizations around the world. Here at the CFCJ, this was reflected in numerous ways, primarily with the far greater demand for humanitarian aid assistance. Together with this, however, precisely this year we were privileged to have two new opportunities: the Kolel, which thank G–d took off and is running so beautifully, and the purchase and building of a women’s and men’s Mikvah, where construction is currently taking place.

“We hope that this Kolel will be an additional link to the total fruition of the promise, ‘For the land shall be full of knowledge of Hashem’, as the Rebbe noted numerous times that ‘full’ means that there is no place that is not saturated with the knowledge of Hashem,” Rabbi Aisenbach concludes.