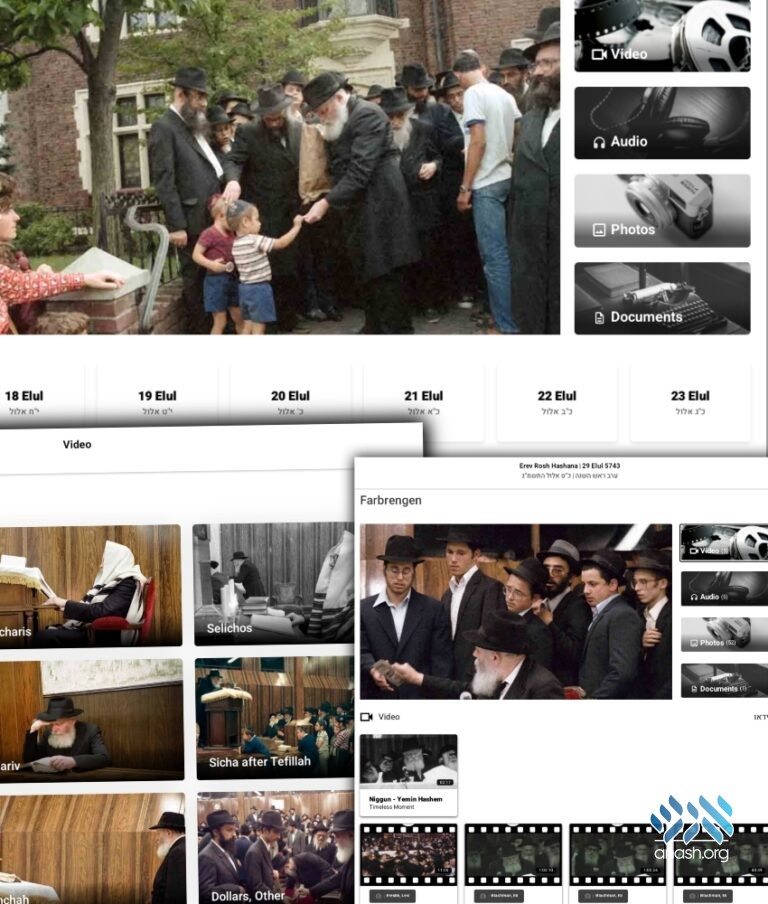 After 15 years of work collecting footage of farbrengens, pictures, transcripts, and everything Tishrei related, JEM has rolled out a beautifully organized site allowing users to launch “everything Tishrei” in recorded media of the Rebbe.

Between attics, closets, and office filing cabinets, footage of farbrengens, pictures, transcripts, handwritten notes, and other random paraphernalia from the Rebbe have been scattered across the globe over the course of decades.

For many years, the staff at Jewish Educational Media have been working to bring together these disparate precious materials. Thank G-d, after much effort, the next monumental step towards turning this vision into reality has been taken : JEM has rolled out Tishreiwiththerebbe.com, a beautifully organized site allowing users to launch “everything Tishrei” in recorded media of the Rebbe.

Though the site is in beta mode — material and functionality will continue to be added in the coming days, weeks and months — it is already being scoured by thousands of Chasidim around the world.

The user is greeted with a clean, simple design that presents each day of the month, starting from the eighteenth of Elul — “Chai Elul” — all the way through the month of Tishrei and Shabbos Bereishis.

Functioning as a “content hub,” it allows the user to browse by date, event, or media type. All the events on a specific day are laid out in order with whatever media is available: film or video from a farbrengen, a picture, a private audience with the Rebbe, transcripts, or printouts.

This newly minted Tishrei with the Rebbe landing page is the culmination of over fifteen years of steady work. While publishing original films, books, and translated farbrengens at breakneck pace, JEM has meticulously and persistently driven toward its goal of preserving, organizing and cataloging all recordings of the Rebbe.

The platform is part of a larger effort from JEM to make media of the Rebbe fully accessible to the public. TishreiwiththeRebbe.com has been generously funded by a grant from Sholom and Esther Laine and by the members of the JEM Foundation.

Past archival access projects include the wildly popular photo and audio collections, a treasure trove of media that grows as further material is acquired and preserved. Rabbi Elkanah Shmotkin, JEM’s executive director, expressed deep gratitude to the team who steadily collected all the materials across the world..

“It’s a true blessing to watch young Chasidim with precious little prior experience become consummate professionals as they fulfill their passion of sharing the Rebbe with so many others,” observed Rabbi Shmotkin. “Like so many of the Rebbe’s Shluchim around the world, they didn’t let lack of experience in the fine details of archive restoration get in the way of achieving their goal. If that meant becoming the best in the world at preservation, cataloging methodologies, and access projects, so be it.”

According to Rabbi Mendel Gourarie, a veteran in the JEM organization, and the person overseeing the vast effort to tag and organize the mountains of content for the Tishrei site, “the end goal was always firmly in sight,” despite the many projects internally competing for attention.

While the design is simple and clean, the process behind it is far from that. “We tested two beta versions of this style page for Yud Alef Nissan and then Lag B’Omer this past year,” explained Yaakov Rozenblat, head of technology at JEM. “We received valuable feedback, which we studied and implemented and led to  the current user-friendly and highly functional design. Those two elements of functionality and ease-of-use were really important to us, and thank G-d, we have achieved that. We still plan on  tweaking it, adding features, and continuously improving.”

Shmotkin expressed gratitude to the supporters who made the effort possible. “The project was so large in scope and in scale that it required the support of many people through the years, and we are indebted to them all.”

“I especially want to thank our lead donor, Mr. George Rohr,” said Rabbi Shmotkin. “From day one, he shared our vision of a world-class archive. Now it’s becoming even more accessible.”

Rabbi Shmotkin was also quick to point out that the launch of the JEM Foundation in 2017 made possible the capital investments to launch this project. “We’ve laid down the infrastructure over the past several years,” said Rozenblat, the director of technology. “Over the next year, we hope to bring together numerous platforms, media types and features, as well as to continuously add more content.”

Rabbi Gourarie explained that as content is added over the coming months, entry points for a variety of audiences will be added. “Some people are ready to sit down and watch a full farbrengen, others prefer to listen to audio as they read along from the printed word, while others are just looking for a quick, inspirational story. The new platform will make all of these available. No matter your background, all you’ll need to do is step in, see what suits you, and enjoy.”

Browse the collection at Tishreiwiththerebbe.com.